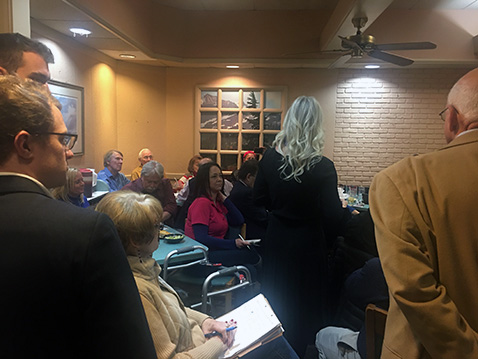 A large crowd enjoyed food and fellowship at the S&S Cafeteria last night for the Center City Conservatives Republican Club. The group meets on the fourth Thursday of the month.

Quite a few candidates were in attendance and spoke to the lively group:

Kyle Ward, candidate for Knox County Commission District 4 (Erik Wiatr stood in due to Ward having a conflicting event)

Wesley Stone, candidate for Criminal Court Judge (Jeremy Coffey was present on behalf of Stone due to a scheduling conflict)

When asked who voted had early voted, the majority raised their hands. The level of engagement and enthusiasm for this election cycle was prominent. Brian Hornback, club president, gave out the raffle prizes with Buddy Burkhardt winning the lion’s share.

Randy Pace, current Knox County GOP chair, reminded everyone of the upcoming Lincoln Day Dinner with US Congressman Matt Gaetz from Florida as the guest speaker.