By design on August 4, 2016Comments Off on Cumberland Avenue paving schedule adjusted

Southern Constructors Inc. crews paved this block of Cumberland Avenue, between 21st and 22nd streets, on Tuesday night and Wednesday morning. This paved lane covers what had been a strip of gravel, and it will be the future westbound lane of Cumberland. The new pavement establishes the roadway and connections with cross streets at the correct new height while providing better access to the entrances of businesses. To the right are wide new sidewalks, with decorative bricks and silva-cell structures that will nurture healthy root growth for new trees. 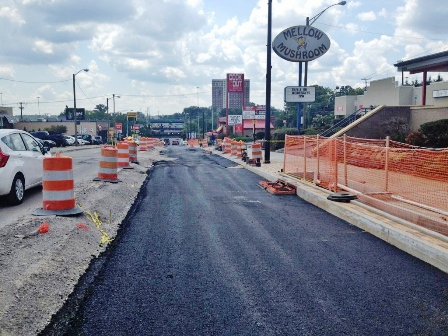 The schedule for overnight pavings along a three-block section of Cumberland Avenue has been adjusted to include Friday night and early Saturday morning, Aug. 5-6.

From 9 p.m. tonight (Thursday, Aug. 4) until 6 a.m. Friday, Aug. 5, North 20th Street will be closed between Cumberland and White avenues. Crews will pave the westbound lane of Cumberland from North 20th toward 21st Street, as well as a short section of North 20th that connects with Cumberland.

While North 20th is closed overnight, motorists may use 19th or 21st streets as alternative routes. Cumberland will remain open to both westbound and eastbound traffic.

While the paving work is an incremental small step in the City’s overall $17 million reconstruction of the seven-block main stretch of Cumberland Avenue, the work will give the Cumberland businesses and their patrons a better glimpse of what the new-and-improved Cumberland will look like.

The new asphalt is replacing a gravel lane, so the entrances to businesses in these three blocks are being improved.

But apart from the smoother paved entrances, stakeholders and enthusiasts for a more pedestrian-friendly and better-functioning Cumberland will, by this weekend, be able to more easily visualize the finished streetscape – the new westbound traffic lane, the wide new decorative sidewalk, and the concrete silva cells, where new trees will be planted next year.

The complete project will be finished by August 2017. Utilities have been upgraded from Alcoa Highway to 17th Street, and the existing four-lane Cumberland between 22nd and 17th streets is being reconfigured to a three-lane cross section with a raised median and left-turn lanes at intersections.

An earlier phase of work on the western end of Cumberland focused on improving traffic flow between the Alcoa Highway ramps and 22nd Street; that phase finished at the end of 2015, on time and under budget.