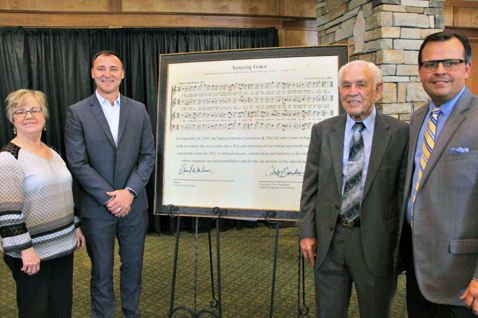 The LeConte Center at Pigeon Forge and the National Quartet Convention have committed to a five-year contract extension that keeps the gospel music event in Pigeon Forge through 2021.

“Four years ago, the NQC and the city of Pigeon Forge announced plans for the LeConte Center at Pigeon Forge to host the NQC for two years,” said Leon Downey, Pigeon Forge executive director of tourism. “Given NQC’s extremely successful track record and prior attendance, our city and our facility pledged to host this event in such a way that both the NQC and Pigeon Forge would be proud. This five-year commitment proves that, together, we’ve delivered on that promise.”

Combined attendance for NQC’s first two years at the LeConte Center at Pigeon Forge is 67,000. Of the city’s more than 14,000 rooms, NQC attendees have reserved an estimated 94,269 paid room nights in 2014 and 2015 for the seven-day event. In its first two years, NQC delivered total attendee spending of more than $32.5 million across a variety of categories including lodging, restaurants, entertainment, shopping, groceries and gasoline.

Pigeon Forge’s quantity and variety of accommodations, the family-friendly atmosphere and the setting at the edge of Great Smoky Mountains National Park were major reasons for the event to come to Pigeon Forge, according to Clarke Beasley, executive vice president of the National Quartet Convention.

“The NQC and Pigeon Forge share the same family values,” said Beasley, “We’re pleased to let our fans know that we’ve established our home for the next five years in a facility that shares our passion for presenting the best in gospel music. Next year, we’ll mark the NQC’s 60th anniversary at the LeConte Center at Pigeon Forge.”

Opened in October 2013, the 232,000-square-foot LeConte Event Center represents a $50 million investment on behalf of the city of Pigeon Forge. In its first three years of operation, the facility has hosted large assembly events, trade shows and expositions, competitive events and special events. Groups from 1,500 to 12,000 attend events in the 100,500-square-foot, clear-span (no columns) exhibit space with up to 17 separate breakout rooms.

JD Sumner, a gospel music legend and former backup singer for Elvis Presley, founded the NQC in 1957 and co-produced it with James Blackwood.

Lineup for the 2016 NQC event include the Hoppers, Greater Vision, Jim Brady Trio, Whisnants, Tribute Quartet, Jason Crabb, Triumphant, Kingdom Heirs and the Mark Trammell Quartet and many others.