By design on March 23, 2014Comments Off on The Greatest Campaigner of Them All: Senator Estes Kefauver, Part Eleven 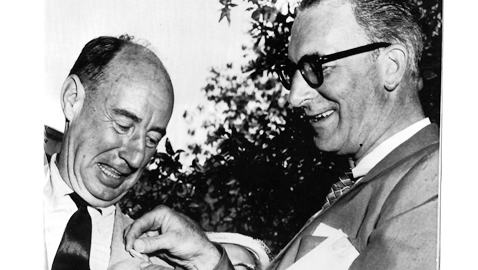 Senator Estes Kefauver had demolished his opposition inside the 1954 Democratic primary and he had been reelected to a second term that fall easily. Almost immediately following his reelection, Senator Kefauver began considering another run for the presidential nomination of his party in 1956.

Dwight D. Eisenhower was quite likely the single most popular individual in the United States of America when he had been nominated by the Republicans to run for president in 1952. He had defeated Illinois Governor Adlai Stevenson handily to win the election and there was some question as to whether the shine on Eisenhower’s reputation had been diminished after having served as president for four years.

Kefauver, ever the outsider, realized he would once again face daunting odds in overcoming the establishment of his own party, but he was anxious to run again. The senator confessed he wanted to run, but as usual, he had little money to run with. A visit to a wealthy Nashvillian brought in a contribution of $10,000, which was enough to kick off Kefauver’s 1956 effort to win the Democratic nomination.

Unlike 1952, Kefauver unexpectedly discovered opposition to another presidential campaign inside his own home. Nancy Kefauver, the senator’s wife, was quite frank in her comments that she preferred Estes not to run and Linda Kefauver, the eldest child, was particularly upset at the idea of her father being away more often than he already was. Linda was coming to resent politics and her father’s long absences from home.

Nancy Kefauver remained clearly resentful herself for much of the campaign, seeming reluctant to make appearances or accompany her husband on the campaign trail.

Once again the Kefauver campaign suffered from being disorganized and the Tennessean seemed utterly unable to properly staff his organization.

Unlike 1952 when he remained coy until literally the last minute, Adlai Stevenson hungered for the Democratic presidential nomination in 1956. Furthermore, this time Stevenson was prepared to fight for it.

Kefauver again entered the New Hampshire primary and won a smashing victory. Kefauver won Wisconsin where he ran unopposed. The first real test of Kefauver’s political strength came in the Minnesota primary where Stevenson had the support of Governor Orville Freeman and Senator Hubert Humphrey. Humphrey wanted to be vice president and thought his best chance would be running with Stevenson that fall. Both Humphrey and Freeman had warned Kefauver to avoid running in Minnesota, promising the Tennessean he would lose badly should he ignore their advice.

Estes Kefauver personally scribbled an announcement of his intention to contest the Minnesota primary and brought his unique style of campaigning to the Gopher State. Cat napping as he traveled all across Minnesota and carrying spare shirts in a paper bag, Estes Kefauver appeared in countless small towns, greeting voters with his firm handshake and a smile.

Adlai Stevenson had little choice but to campaign personally, while Governor Freeman and Senator Humphrey stumped the state on his behalf. Polls showed Kefauver well behind Stevenson. Surrounded by friends, a Scotch and soda cradled in his big hands, Kefauver watched as he proceeded to win 57% of the vote in a state where he had been assured he could not win.

Kefauver’s victory was so complete, his slate of delegates had defeated the party professionals, leaving both Senator Hubert Humphrey and Governor Orville Freeman in the supremely embarrassing position of not being members of the Minnesota delegation to the Democratic National Convention. They would have been excluded as official members of their own delegation had it not been for Estes Kefauver’s personal generosity in extending them spots in his own slate of delegates.

Adlai Stevenson, chastened by his loss in Minnesota, determined to meet Estes Kefauver in the Florida and California primaries and intensified his own campaigning. No longer the aloof intellectual candidate, Adlai Stevenson was soon pumping hands, kissing babies and engaging in the kind of retail politics Estes Kefauver had mastered long ago.

Stevenson was the first to let go an assault, criticizing Kefauver’s attendance record in the Senate while campaigning in Florida. Stevenson pointedly noted not a single other senator had endorsed the Tennessean.

Kefauver was wounded and responded, “I have many friends in the Senate.”

In an attempt to prove it, Kefauver set out to secure endorsements from some of his colleagues and to his surprise and chagrin, discovered even his junior colleague from Tennessee, Albert Gore, dodged supporting him. In his excellent biography of Senator Kefauver, Charles Fontenay quotes Gore as telling his colleague that he had “publicly pledged myself to remain aloof from a possible contest or controversy regarding the Tennessee delegation, saying I would be glad to support either you or Governor Clement for national preferment.”

Like Kefauver, Governor Frank Clement was highly ambitious and was to be the keynote speaker at the Democratic National Convention. Both Clement and Gore thought lightning might strike and both daydreamed about becoming Vice President of the United States. The abundance of political talent in Tennessee was pitting Kefauver, Gore and Clement against one another.

After a hard fought contest in Florida, Adlai Stevenson barely squeezed by Estes Kefauver, winning 221,718 votes to the Tennessean’s 209,447 votes.

His loss of the California primary effectively ended Estes Kefauver’s quest for the Democratic presidential nomination in 1956. As the national convention approached, Kefauver began thinking about the possibility of running with Stevenson as the vice presidential candidate. Senator Kefauver readily admitted his attacks on Stevenson during the hard fought primaries was out of character for him and he apologized. Kefauver withdrew as a candidate for the presidency and threw his support to the former Illinois governor.

As Democrats gathered in Philadelphia for the national convention, the situation for the Tennessee delegates was becoming increasingly complicated. The delegation had agreed to support any Tennessean with a chance to land a spot on the national ticket. Clement, acknowledged to be a remarkably effective orator, had finally won an opportunity to bask in the national limelight by giving the keynote speech of the convention. Many of the governor’s friends believe it was one of the worst speeches of his career. Clement, who regularly used biblical phrases and allusions in his speeches, used the theme of “How long, oh Lord, how long?” in his speech. It was an overly long and rambling affair and not at all well received on the medium of television. One newspaperman wryly noted the Tennessee governor had slain the Republican Party with “the jawbone of an ass.”

His speech having fallen flat, Clement was eliminated as a serious contender for the vice presidential nomination.

Senator Kefauver was initially uncertain and wavered before finally deciding to fight for the nomination. Still, Kefauver did not have the unqualified support of his own delegation; quite to the contrary, there were many Tennessee delegates who were opposed to Estes Kefauver. The Tennessee delegation had been prepared to back Governor Clement for the vice presidential nomination, but switched to Senator Albert Gore. Even without the support of his own state, Senator Kefauver led on the first ballot with 483 ½ votes, followed by Senator John F. Kennedy with 304 votes. Albert Gore lagged behind with 178 votes.

Gore later confessed he believed he could win the nomination with a deadlock between Kefauver and Kennedy. Senator Gore had received considerable support from the large Texas delegation, which was headed by Lyndon Johnson and Speaker of the House Sam Rayburn. Gore was surprised when the Texans abandoned him on the second ballot in favor of Senator John F. Kennedy. Texas was not the only big state to switch its preference; New York joined the Kennedy column as well.

Kefauver was hurrying to the suite of Senator Hubert Humphrey and found the Minnesotan crying, realizing his hope of winning the vice presidential nomination was done. Kefauver’s biographer, Charles Fontenay, masterfully described the scene between the two men.

An emotional Kefauver also began crying and grabbed hold of Humphrey and exclaimed, “Hubert, I’ve just GOT to have those delegates! Hubert, you’ve just got to help me!”

Humphrey yelled that he was for Kefauver and dashed off for the convention hall to announce his switch. Kennedy was gaining ground and only good luck prevented a stampede for the Massachusetts senator, keeping Kefauver’s chances alive. Other delegations were preparing to join the Kennedy bandwagon and small fights began to erupt inside some of the delegations. California Attorney General Edmund “Pat” Brown began frantically waving the state’s banner in the hope of attracting the attention of the convention chair to announce a switch to Kennedy. Congressman James Roosevelt, son of the late President Franklin Delano Roosevelt, was deeply committed to Estes Kefauver and snarled at Brown that he had not changed his vote and if Brown dared to announce a vote without polling the entire California delegation he would bodily harm the Attorney General.

Senator Albert Gore sat dejectedly in a bar, watching his support evaporate and when approached to release his delegates to his fellow Tennessean, he refused. Discovered at the bar by Silliman Evans, Jr. who had succeeded his late father as publisher of the Nashville Tennessean, Evans promptly berated Gore.

According to Charles Fontenay, Evans roared, “You son of a bitch, my father helped make you and I can help break you! If you don’t get out of this race, you’ll never get the Tennessean’s support for anything again, not even dogcatcher. The Tennessean will beat you if it takes a million years!”

A silent Gore plodded off and located the Tennessee delegation, telling Governor Frank Clement he was withdrawing and throwing his support to Kefauver, causing Clement to wail, “Oh, no, not Estes!”

Considering that Speaker Sam Rayburn, presiding over the Democratic convention, was hostile to Estes Kefauver, Kefauver’s supporters employed a rather shrewd trick to get the wily old Texan’s recognition. A runner went screaming down to the rostrum exclaiming Tennessee was about to announce its support for John F. Kennedy and it worked. Rayburn immediately recognized the Tennessee delegation.

Senator Albert Gore declared he was withdrawing and the Tennessee delegation was supporting its native son, Estes Kefauver.

Sam Rayburn was stunned, his usually impassive and forbidding face registering his surprise and anger. Oklahoma, which had also been supporting Gore, switched to Kefauver, as did Hubert Humphrey’s Minnesota.

Once again Sam Rayburn was prodded to recognize yet another state, this time Missouri, and as the request for recognition came from Congressman John McCormick of Massachusetts, Rayburn thought the Show Me State, home of Harry S. Truman, would go for Kennedy. The Speaker’s face fell when Senator Thomas Hennings announced the entire Missouri delegation was supporting Estes Kefauver. That vote put Kefauver in the lead for the vice presidential nomination. California gave Estes Kefauver the needed votes to clinch the nomination.

Estes Kefauver was officially the Democratic nominee for Vice President of the United States.

The Greatest Campaigner of Them All: Senator Estes Kefauver, Part Eleven added by design on March 23, 2014
View all posts by design →