By design on February 2, 2014Comments Off on The Greatest Campaigner of Them All: Senator Estes Kefauver, Part Four 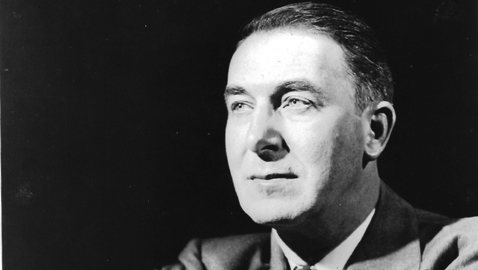 By 1946 Estes Kefauver had been in Congress for seven years and was contemplating a race against Tennessee’s most powerful political figure, United States Senator Kenneth D. McKellar.  Although little known outside his own Congressional district, Kefauver was relatively young and energetic while Senator McKellar was seventy-seven years old and slowing down.  McKellar had been in Congress since Estes Kefauver was a mere eight years old.

McKellar had defeated the cream of Tennessee political elite to get to the United States Senate and stay there; former governors Malcolm Patterson and Ben W. Hooper, Senator Luke Lea, House Minority Leader Finis Garrett, future Congressman Howard Baker, and Knoxville Mayor James A. Fowler had all lost to McKellar at one time or another.

Senator McKellar commanded an army of patronage appointees in the State of Tennessee and presided over a political organization that stretched from one end of Tennessee to the other.  From Mountain City to the banks of the Mississippi River in Memphis, there were literally tens of thousands of Tennesseans for whom Senator McKellar had done a favor at one time or another.  Despite his reputation for being irascible, McKellar could be courtly and extended every courtesy and consideration to any Tennessean who approached him.  McKellar’s reputation for going to extreme lengths to help any Tennessean was well deserved.

McKellar’s own political organization was allied with that of E. H. Crump, the lord and master of Shelby County and Memphis.  The two were personal friends as well as political allies and they had ruled Tennessee politics almost completely since 1932.  No governor or U. S. senator had been elected since that time without the support of either McKellar or Crump.

Although aging and increasingly ill, Senator McKellar remained a formidable candidate.  Widely respected by the people of Tennessee and held in affectionate regard by many of his constituents, McKellar’s personal prestige was actually enhanced with the death of President Franklin Delano Roosevelt in 1945.  K. D. McKellar was at the peak of his power inside the United States Senate.  In effect Chairman of two committees due to the incapacitation of Virginia Senator Carter Glass, McKellar sat as the Acting Chairman of the Appropriations Committee and served as Chairman of the Post Office and Post Roads Committee.  McKellar had also succeeded Glass as President Pro Tempore of the Senate, a largely ceremonial post, but with the death of FDR, it put him in line for succession to the presidency.  President Harry Truman, a senator himself before being elected vice president in 1944, recognized the power of McKellar and invited the old Tennessean to sit with his Cabinet, a recognition of McKellar’s influence not lost on his constituents.

Estes Kefauver and K. D. McKellar did not like one another.  McKellar oftentimes derisively referred to the Chattanooga Congressman as “Cowfever”, a derision shared with Harry Truman.  McKellar also gleefully informed Crump that Kefauver had claimed Thomas Jefferson, a son of Virginia, as a Tennessee president while at the 1944 Democratic National Convention.  McKellar told Crump, “He is about as stupid as they make them.”

Kefauver quickly discovered he could not obtain the necessary financial and personal support to successfully challenge the old senator.  Kefauver traveled to Nashville to talk to possible supporters, including Silliman Evans, publisher of the Nashville Tennessean, which was bitterly opposed to both Senator McKellar and the Crump machine.  Even Evans was doubtful about the wisdom of Kefauver running against McKellar, concluding such a race would be “almost futile.”

Kefauver’s visit to Nashville was in sharp contrast to a similar visit by Senator McKellar in January of 1946 just a few days after announcing he would run for a sixth term in the United States Senate.  Virtually nobody noticed Congressman Kefauver coming to Nashville while much of Nashville’s political and business establishment gathered to welcome Senator McKellar.

As McKellar’s entourage approached Nashville by automobile from Memphis, endorsements rained down upon the old senator’s head.  Tennessee’s junior U. S. senator, Tom Stewart, issued a glowing endorsement of his senior colleague, as did Congressman Tom Murray of Jackson.

McKellar’s arrival in Nashville coincided with the senator’s announcement of federal money pouring into Davidson County for a variety of projects.  It amply demonstrated the power of McKellar, as well as the benefit of his seniority to Tennesseans.

Kefauver left Nashville without any fanfare and returned to Chattanooga where he concluded challenging McKellar directly was perhaps not a good idea.  Kefauver announced he would seek reelection to Congress, causing McKellar to write Crump sarcastically that apparently the demand had been such that Kefauver could not disappoint his friends and forgo reelection to the House.

The stubborn Kefauver needlessly involved himself in the Senate race by supporting Edward Ward “Ned” Carmack against McKellar.  Carmack had run a surprisingly strong race against Senator Tom Stewart in 1942 and only the election returns from Shelby County had saved Stewart from defeat.

Kefauver’s open support of Carmack’s candidacy infuriated some of the most powerful politicians inside his own Third Congressional district.  Hamilton County Judge Wiley Crouch was strongly for McKellar’s reelection as was Sheriff Burch Biggs, the boss of McMinn County.

According to Kefauver’s biographer, Charles Fonteny, Judge Couch made his displeasure with Kefauver well known, growling, “I’m going to beat the hell out of him.”

Friends of Kefauver begged Judge Couch to talk to the Congressman.

“I never can find him,” Couch snapped.  “He’s always speaking in New York or Chicago or somewhere.”

Finally Judge Couch relented, saying, “I’ll talk to him tomorrow afternoon at the Read House.  He’ll have to be there, though.  I’m not going to wait for him.”

Kefauver balked at the edict and it took considerable effort to persuade him to fly from the Capitol to Chattanooga to keep the appointment with Judge Couch.

The amiable Kefauver attempted to start the conversation by greeting the judge and asking how his wife was, causing Couch to snarl, “You don’t give a damn how Mable is!”

The two talked for an hour and a half and left the hotel arm in arm.  Still, Couch’s first loyalty was to Senator McKellar and he was not fully committed to Kefauver’s reelection.  Another meeting was called and the two met at a downtown Chattanooga eatery and resolved their differences and Judge Couch signed Kefauver’s petition to run again.

Kefauver did get a primary opponent in 1946, almost entirely due to his flirting with the idea of running against Senator McKellar.  Fortunately for Congressman Kefauver, his opponent was not a quality challenger, although it was a bitter campaign.

W. F. “Pup” McWhorter went so far as to denounce a member of Kefauver’s Congressional staff as a “pink”, causing the sensitive young man to walk into the Congressman’s office and tearfully offer up his resignation.  Kefauver sat him down and refused to accept his resignation, telling the young man politics could be “pretty mean” sometimes.

Kefauver, cobbling together the feuding factions inside the Democratic Party in his own district, managed to gather the support of virtually all of those opposed to McKellar, as well as those politically potent enough to cause him real concern who remained loyal to the old senator.  One odd endorsement of Kefauver’s candidacy for reelection to Congress in 1946 came from Memphis; the Boss himself announced he, too, backed Kefauver.

Senator McKellar crushed Ned Carmack, beating him badly without even once returning home to Tennessee to campaign in person.  It was a remarkable feat, especially in light of the fact Carmack had quite nearly beaten Senator Stewart in 1942.

Estes Kefauver easily turned back the challenge of the hapless “Pup” McWhorter and returned to Washington, but his thoughts about running for the United States Senate had not diminished; in fact, if anything, they had intensified.

Kefauver immediately began to consider running against Tom Stewart in 1948.  A campaign against Senator Stewart was not so daunting an enterprise as facing the redoubtable McKellar.

Tom Stewart had first been elected to the United States Senate in 1938, a special election to fill the remainder of the term of Senator Nathan L. Bachman who had died in 1937.  Stewart was urged to run for the Senate by Senator McKellar and was promptly endorsed by Mr. Crump.  Stewart was running in a three-way race against Senator George L. Berry, who had been appointed by Governor Gordon Browning, and Congressman J. Ridley Mitchell.  Senator Stewart had been reelected in 1942, once again with the full support of Senator McKellar and Crump.  His reelection bid had been less than impressive and the Memphis Boss was utterly appalled by the fact Stewart would have lost the nomination without the votes from Shelby County.  Crump’s doubts about Tom Stewart were to grow over the next six years and have a major impact upon Estes Kefauver’s political fortunes.

Estes Kefauver began quietly canvassing all across Tennessee to see what his chances might be were he to challenge Tom Stewart in 1948.  There was little reason initially for Kefauver to think McKellar and Crump would not support Stewart for reelection.  Nor was there reason to believe Senator Stewart might not actually be in a stronger position in 1948.  Stewart was a highly amiable and kindly man and tended to the constituent service that had kept McKellar in office for decades.  Senator Stewart had also strengthened his relationships with many of Tennessee’s politically powerful local leaders.  Stewart’s name recognition was also far higher than that of Kefauver statewide.

The Congressman’s friends were much more encouraging about a possible Senate bid against Tom Stewart than they had been about a potential challenge to the powerful McKellar.

As 1948 approached, Estes Kefauver looked more and more like a candidate for the United States Senate.  He would be the beneficiary of the single greatest mistake of Edward Hull Crump’s long political career.

The Greatest Campaigner of Them All: Senator Estes Kefauver, Part Four added by design on February 2, 2014
View all posts by design →