The Greatest Campaigner of Them All: Senator Estes Kefauver, Part Ten

By design on March 16, 2014Comments Off on The Greatest Campaigner of Them All: Senator Estes Kefauver, Part Ten 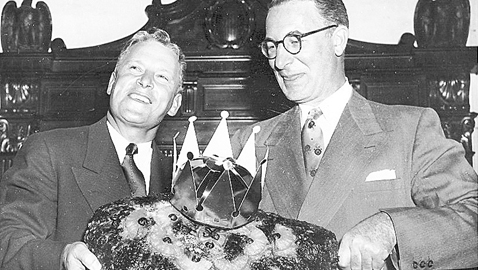 Senator Estes Kefauver had made a spirited bid for the 1952 Democratic presidential nomination, only to lose to a candidate who had never entered the first primary and remained coy until the last minute.  Kefauver was profoundly disappointed but that did not keep him from campaigning for the Democratic candidates in the fall.

Kefauver was also dismayed by the loss of his friend Gordon Browning.  Having been governor three times, Browning had lost a fourth reelection bid to Frank Clement.  According to his biographer, Kefauver would sip his Scotch and murmur repeatedly , “I just can’t understand what happened to poor old Gordon.”

Kefauver was much happier with the result of the race for the United States Senate in Tennessee.  Senator Kenneth D. McKellar had finally been defeated by Congressman Albert Gore.  McKellar’s dislike of Kefauver had been palpable and his return to Memphis didn’t hurt Kefauver’s feelings at all.

Senator Kefauver had to start thinking about his own standing in Tennessee.  He would be up for reelection to a second six-year term in 1954 and it was clear he would have significant opposition inside the Democratic primary.

Governor Frank Clement was the opponent that worried Kefauver the most, but Clement was the first chief executive in Tennessee to qualify to serve a four-year term.  Clement opted to run for reelection in 1954, once again facing Gordon Browning, who was determined to vindicate himself.  It was Browning’s seventh and final race for the governorship and his humiliating defeat ended his political career.  Thereafter, Browning would retire to the political sidelines and assume the status of an elder statesman.

Estes Kefauver, being more liberal than many, if not most, of his constituents, always seemed to be a target in Tennessee.  Kefauver never enjoyed the widespread appeal that K. D. McKellar had for the majority of his Congressional career.  Throughout much of 1953, Kefauver’s opponents tried hard to recruit former Senator Tom Stewart and former governor Prentice Cooper to run for the Senate.  Stewart had been defeated by Kefauver in 1948 in a three-way race and would have almost certainly have won had it not been for E. H. Crump’s refusal to support him once again.  Stewart had resumed his law practice in Nashville following his defeat and took the attitude he had enjoyed serving in the United States Senate, but the people had spoken and they did not want him as their senator.  Stewart had been strongly urged to consider a political comeback in 1952 when it appeared K. D. McKellar might be too ill to run again.  Had McKellar retired, Stewart very well might have become a candidate that year.  In 1954, he had no interest in returning to the Senate.

Prentice Cooper had wanted to run for the U. S. Senate in 1942, but McKellar had preferred Tom Stewart, so Cooper ran for reelection as governor.  After leaving office in 1945, Cooper had secured an appointment as Ambassador to Peru, a post he acquired through the offices of Senator McKellar.  After his stint as ambassador, Cooper returned to Shelbyville and married for the first time.  Cooper kept himself busy practicing law, supervising the family interests, and raising three small sons.

Cooper remained interested in holding office and his name floated about as a possible candidate for either governor or U. S. senator throughout the decade of the 1950s.  Cooper would announce his candidacy for governor in 1958, but would drop out of the gubernatorial contest to run against Senator Albert Gore.

Neither Tom Stewart nor Prentice Cooper would enter the 1954 senatorial contest against Estes Kefauver.  The candidate who did file to run for the United States Senate was Congressman James Patrick “Pat” Sutton of Lawrenceburg, Tennessee.

There was also the question of Ed Crump.

E. H. Crump, leader of the Shelby County political machine, had somewhat revived his reputation by backing Frank Clement over Gordon Browning in 1952.  Crump had remained loyal to his old friend and political partner K. D. McKellar in McKellar’s final Senate race.  Still, Crump was a much diminished political figure in 1954 and in fact was approaching the end of his life.

Pat Sutton had been elected to Congress in 1948, the same year Estes Kefauver had first been elected to the U. S. Senate.  Sutton had defeated an incumbent Congressman, Wirt Courtney, by less than sixty votes.  Congressman Courtney had been an old New Deal Democrat, while Sutton, a veteran of World War II, was far more conservative.  Sutton was reelected to Congress in 1950 and 1952 and had expressed an interest in moving up to the Senate in 1952 should Senator McKellar retire.

Sutton was only thirty-three when he beat Wirt Courtney for Congress.  He had returned from the war with an impressive record.  Possessing a charismatic and flamboyant personality, Sutton was also a compelling speaker.  Sutton’s career in Tennessee politics was short and controversial.

Pat Sutton naturally hoped to have Crump’s support in the senatorial primary and was prepared to wage an expensive and hard fought campaign.

It soon became readily apparent Pat Sutton had access to considerable campaign funding.  He traveled the state via helicopter, then quite a novelty.  Sutton’s financing from one oil millionaire alone was supposed to be in the range of $150,000.

Senator Kefauver’s campaign was managed by his friend and former Administrative Assistant, Charles Neese.  Neese counseled Kefauver to run off his record and largely ignore Pat Sutton.  Kefauver moved through Tennessee’s cities and small towns, shaking hands and stuck to Neese’s advice until Pat Sutton began hammering the senator over the recent decision by the United States Supreme Court.  That particular decision, barring school segregation had inflamed a goodly number of people in the South and Tennessee was no exception.

As Charles Fontenay points out in his excellent biography of Estes Kefauver, the senator addressed the issue in his opening speech of the 1954 campaign.

“I refuse to appeal to prejudice in connection with it.  Men and women of good will, of both races, should be giving their best thoughts to these very knotty problems, with the end in view that nothing must be allowed to disrupt our fine public school system or destroy the good racial feeling that exists.”

It was a particularly bold statement by a statewide official in Tennessee for the time.

Aside from doing his best to inflame racial discord, Congressman Pat Sutton returned to the old charge that Senator Kefauver was soft on Communism.  That was a particular theme when Sutton opened his own senatorial campaign.

A generally genial man and good natured, Estes Kefauver soon tired of the harsh criticisms leveled at him by his opponent.  Increasingly irritated, Kefauver mildly told one close friend, “I’m getting awfully tired of Pat saying all those things about me.”  Despite the mildness of the statement, Kefauver was boiling mad.  He began lashing back at Congressman Sutton and while campaigning in Shelbyville, snarled that “little Hitlers and little Stalins” who craved nothing but “personal power” were dangerous.

The Kefauver campaign suspected Sutton was the beneficiary of heavy contributions from organized crime figures who had not forgotten the Senate crime hearings chaired by the Tennessean.

At the beginning of July, former Senator K. D. McKellar issued an endorsement of Pat Sutton.  McKellar apparently knew little about Pat Sutton, which is odd considering they served together in Congress for four years before the old senator had been beaten by Albert Gore.  Still, McKellar retained his active loathing of Estes Kefauver and openly supported Sutton.  It made little difference; having been out of office for two years, the once powerful McKellar organization had largely withered and died.  The days of coalition tickets and open alliances between candidates had largely disappeared from Tennessee politics.

Toward the end of the campaign, Sutton claimed to have the support of Memphis Boss E. H. Crump, a claim Crump immediately denied.  Crump took little part in the Senate race, although he did say a few nice things about Kefauver, praising the senator for his support for the Tennessee Valley Authority.  It was the last campaign of Crump’s life as the Memphis Boss would die in October of 1954.

Pat Sutton evidently realized his Senate campaign was not going as well as he hoped and he began to become more reckless in making charges, one of which was his accusation that a prominent Kefauver supporter was a Communist.  Quickly realizing his mistake, Sutton retracted his statement and issued an apology, but he was later successfully sued by the individual he had named as a Communist.  That same individual won a $25,000 suit against Sutton.

Kefauver won 440, 497 votes to a paltry 186,363 for Pat Sutton.  Kefauver won 68% of the vote to Sutton’s 28%.  Considering the aggressive nature of Pat Sutton’s campaign, as well as his access to campaign contributions, it was an overwhelming endorsement of Estes Kefauver by Tennessee Democrats.

Governor Frank Clement had won an almost identical victory in his own reelection campaign.  Clement won 68% of the vote against former governor Gordon Browning, tallying 481,808 votes to Browning’s 195,156 votes.

Both Estes Kefauver and Frank Clement had established their primacy in Tennessee politics and it would not be long before their ambitions collided.

The Greatest Campaigner of Them All: Senator Estes Kefauver, Part Ten added by design on March 16, 2014
View all posts by design →