The Greatest Campaigner of Them All: Senator Estes Kefauver, Part Two

By design on January 19, 2014Comments Off on The Greatest Campaigner of Them All: Senator Estes Kefauver, Part Two 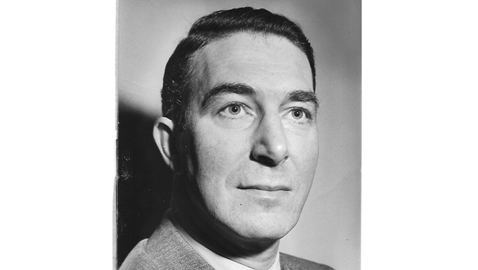 Congressman Sam D. McReynolds had first been elected in 1922 and had been reelected consistently ever since.  McReynolds had been highly popular in Tennessee’s Third Congressional district and he had routinely easily turned back every challenger inside the Democratic primary and the general election as well.

When Senator Nathan L. Bachman died in 1937, Congressman McReynolds toyed with the idea of either being appointed or running for the United States Senate in 1938.  Ultimately, McReynolds opted to run for reelection to Congress where he chaired the House Foreign Affairs Committee.  McReynolds died unexpectedly in Washington, D. C. on July 11, 1939, leaving his seat vacant.

The most formidable obstacle to Kefauver’s proposed run for Congress was the possible candidacy of James B. Frazier, Jr.  Frazier was the namesake and son of a former governor and United States senator; he was also the incumbent United States Attorney for the Eastern District of Tennessee.  Frazier had been appointed to his post by Senator Kenneth D. McKellar and was highly popular in the Third Congressional district.  Much to Kefauver’s relief, Frazier soon announced he would forego a race for Congress, preferring to remain in office as U. S. Attorney.  When Kefauver retired from Congress in 1948 to seek election to the United States Senate, Frazier did resign as U. S. Attorney and was elected to Congress.

It was clear Estes Kefauver would have opposition for the Democratic nomination for Congress and Judge Leonidas D. Miller announced he would run.  Miller had made a race against Congressman McReynolds in 1938, but had lost badly.  Miller had been an attorney for many years, served in the Tennessee General Assembly and believed he could count on support in each of the district’s twelve counties.

As is usually the case in such races, Kefauver’s Congressional campaign was affected by infighting inside the Democratic Party.  Judge Will Cummings, County judge for Hamilton, was under assault from one of his former allies.  Wilkes Thrasher, a member of the Hamilton County Court, had hungered to go to Congress himself and had actually challenged Congressman McReynolds in 1934.  Despite their alliance, Judge Cummings supported Congressman McReynolds and Thrasher’s anger with his former friend still burned bright.  Thrasher and his allies took control of the County Court, defeating candidates supported by Judge Cummings.

Wilkes Thrasher and his friends appeared at the Democratic convention called for the special election to Congress and supported Judge Miller.  Having little other option, Judge Cummings backed Kefauver, which proved to be decisive.  Kefauver had wanted an open primary, free from the poll tax and Judge Will Cummings and his organization helped Kefauver achieve his goal.

Kefauver was the Democratic nominee for the special election and faced Republican Casto Dodson and perennial candidate Dr. John R. Neal, who was running as an Independent.  Kefauver took little for granted as the Third District had elected a Republican Congressman in 1920 and the GOP candidate in 1928 had come within 3,000 votes of defeating Sam D. McReynolds.

Estes Kefauver concentrated his efforts in the eleven counties outside his own Hamilton County, making himself known to voters who had no idea who he was; oftentimes taking his red-headed wife with him, the two made a formidable duo.

According to Kefauver’s biographer Charles Fontenay, Kefauver and his friend Lee Allen were driving back on Election Day, having worked the polls and despite the fact no returns had been posted, Allen noted Kefauver had been elected to Congress.

“Aw, Lee,” Kefauver drawled, “they’re a dime a dozen.  But it just might lead to something.”

Even then Estes Kefauver’s ambition knew no bounds.

Lee Allen’s confidence in Kefauver’s election was well justified, as Kefauver carried every county in the district save for one.  He won 14,268 votes to 5,355 for Dodson, while Dr. Neal tallied a meager 363 votes.

The world was already changing.  Hitler’s armies had crossed the Polish border and within weeks had conquered Poland.  Britain and France had declared war on Germany and the spark ignited the flames of the Second World War.  Estes Kefauver was still in Chattanooga, trying to rearrange his affairs before leaving for Washington, D. C.  Kefauver was caught by surprised when a special session of Congress was called and he and Nancy hurried off to the nation’s Capitol.

Having no home in Washington, Kefauver and his wife took a room at the Mayflower Hotel before visiting the office that had belonged to Congressman Sam D. McReynolds.  Greeted by the late Congressman’s secretary, Kefauver went across the street to the House of Representatives, only to be barred from entering the Chamber by a zealous Capitol police officer who insisted Congressman Kefauver had already passed by.

An irritated Kefauver had to send for Congressman Jere Cooper from West Tennessee to come out and verify his identity before he could step onto the floor of the House for the first time.

Kefauver became acquainted with the Speaker of the House, William Brockman Bankhead of Alabama.  Father of the celebrated actress Tallulah Bankhead, Kefauver quickly developed a liking for the Alabamian.  It was Bankhead who advised Kefauver, “Work on your mail, young man.  When people write you, see that they get good answers, and promptly.  Sign them yourself.  Send them some literature.”  Kefauver took the advice and only Senator K. D. McKellar likely wrote more letters.

Kefauver naturally consulted with Secretary of State Cordell Hull.  Hull had been a Congressman and senator from Tennessee and would become the longest serving Secretary of State in U. S. history.  Revered by many in Tennessee, Congressman Kefauver went to see Hull who advised him to master only one subject as a Member of Congress.

The Chattanooga Congressman’s maiden speech in the House was a talk in support of Cordell Hull’s Reciprocal Trade Agreements legislation.

It wasn’t long before Kefauver decided the elegant Mayflower, while a mighty nice hostelry, was a bit too expensive.  Congressman Kefauver and his wife moved into the Hotel Washington, which was more economical, but even then when he first arrived, he encountered a skeptical desk clerk, who promptly informed the Tennessean rooms were $8.00 per day.  At the time, that was rather pricey, as many fine hotels across the country charged half that.  Kefauver, grinning, pointed out he was a Congressman from Tennessee and the desk clerk snapped, “That’s all right.  We have no objection to your staying here.”

Not surprisingly, Congressman and Mrs. Kefauver did not remain at the Hotel Washington long and soon settled into a comfortable apartment at the Wardman Park, which is where Secretary of State Cordell Hull lived.

With the help of Jere Cooper, Kefauver won an assignment to the House Judiciary Committee, an excellent assignment for a freshman legislator.

Estes Kefauver’s first years in Congress were apparently a happy time for he and Nancy.  Largely unknown in Washington, they were able to spend more time together as a couple and not having any children, they were free from most home responsibilities.  The Kefauvers did have a cocker spaniel, or several, at a given time.

It was not long before Congressman Estes Kefauver had won a reputation for taking care of the folks back home.  He was a staunch supporter of President Franklin Delano Roosevelt and the Tennessee Valley Authority.

Estes Kefauver had been in Congress for a couple of years when he ran afoul of the most powerful member of Tennessee’s Congressional delegation and one of the most formidable figures in Volunteer State politics: Senator K. D. McKellar.

McKellar had come to positively loathe David Lilienthal, Director of the Tennessee Valley Authority.  McKellar’s office had been flooded with complaints from East Tennesseans, where the senator was highly popular, who were concerned about the construction of Douglas Dam.  The Tennessee Farm Bureau was especially distraught about the possibility Douglas Dam would flood thousands of acres of prime farm land, ruining both farmers and businessmen.  McKellar, already angry with Lilienthal, and always one to pay attention to his constituents, the influential senator announced his own opposition to Douglas Dam.

Snarling David Lilienthal was Uriah Heep come to life, Senator McKellar singlehandedly stopped construction of Douglas Dam.  It was only a personal plea from President Roosevelt that caused the senator to change his mind when the United States was engaged in fighting World War II.

Throughout his short political career, Estes Kefauver had been aligned with politicians and political organizations who were solidly allied with Senator K. D. McKellar.  Governor Prentice Cooper was much closer to McKellar than he was to Memphis Boss E. H. Crump.  Judge Will Cummings was a strong McKellar man and perhaps it is not surprising Congressman Estes Kefauver sided with the senator when McKellar bickered with Lilienthal over the schedule of dam construction in East Tennessee.

Congressman Kefauver trespassed against Senator McKellar’s authority when he refused to back the McKellar amendment, which would have required the TVA to return to Congress continually for operating funds.  McKellar passed his amendment through the United States Senate, but Kefauver spoke against it on the floor of the House.  The McKellar amendment failed in the House and Estes Kefauver found himself on the bad side of K. D. McKellar.

The Greatest Campaigner of Them All: Senator Estes Kefauver, Part Two added by design on January 19, 2014
View all posts by design →