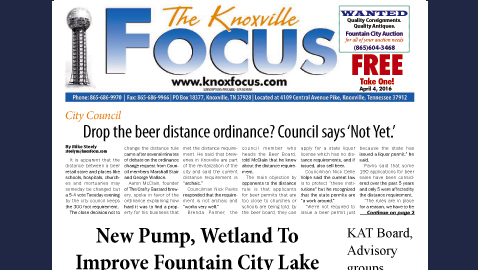 Drop the beer distance ordinance? Council says ‘Not Yet.’

It is apparent that the distance between a beer retail store and places like schools, hospitals, churches and mortuaries may someday be changed but a 5-4 vote Tuesday evening by the city council keeps the 300 foot requirement.

The close decision not to change the distance rule came after several minutes of debate on the ordinance change request from Council members Marshall Stair and George Wallace.

Aaron McClain, founder of The Crafty Bastard brewery, spoke in favor of the ordinance explaining how hard it was to find a property for his business that met the distance requirement. He said that breweries in Knoxville are part of the revitalization of the city and said the current distance requirement is “archaic.”

Councilman Nick Pavlis responded that the requirement is not archaic and “works very well.”

Brenda Palmer, the council member who heads the Beer Board, told McClain that he knew about the distance requirement.

The main objection by opponents to the distance rule is that applicants for beer permits that are too close to churches or schools are being told, by the beer board, they can apply for a state liquor license which has no distance requirements, and if issued, also sell beer.

Councilman Nick Delle Volpe said the current law is to protect “these institutions” but he recognized that the state permits are “a work around.”

“We’re not required to issue a beer permit just because the state has issued a liquor permit,” he said.

Pavlis said that some 190 applications for beer sales have been considered over the past 5 years and only 5 were affected by the distance requirement.

“The rules are in place for a reason, we have to be careful,” said Councilman Daniel Brown.

“You inhibit business development because of that requirement,” Wallace said. He explained that he offered the agenda items, being considered on first reading, to create a public discussion.

“I don’t regret bringing it, I still support it,” he said.

Stair said the issuance of liquor permits by the state with no distance requirement is “a giant loophole.”

“We’re in a position to change that. We’ve already exempted downtown, “he said, mentioning the growing density in areas like Bearden, the South Waterfront, Magnolia, Central and Broadway as being similar.

He said the current distance requirement affects small restaurants like pizza places that may want to sell beer.

Councilman Finbarr Saunders said that the city “needs to be as friendly as we can” and said he’d like to see the conversation keep going.

“We need to deal with this,” he said.

The vote to consider dropping the 300 foot distance between beer selling stores and the other establishments saw Wallace, Saunders, Stair and Mark Campen voting for the change and Brown, Della Volpe, Palmer, Pavlis and Duane Grieve opposing it.

In a related matter the city council, after much discussion and public comment, voted to delay a decision about final food truck regulations for two weeks.

The debate on that subject has also to do with distance — the distance between the food vehicles and neighborhoods, whether or not the trucks can use “smokers” to their locations, and where the trucks can operate.

Larry Silverstein and Carlene Malone spoke in opposition to several items in the food truck regulations and primarily against the smokers. The language of the ordinance now goes to the city law office and will return to the council where it will apparently continue to face opposition.

He said the ordinance language has “several sticky points” with the main objection concerning the smokers.

Della Volpe, in referring to applications that passed to issue certificates of compliance for the new state wine sales from grocery stores, said he was surprised that there were 22 applications from Pilot stores. The certificates were issued by the council with Della Volpe’s support but he commented that the state requires at least 20% of the sales from a business to be food.