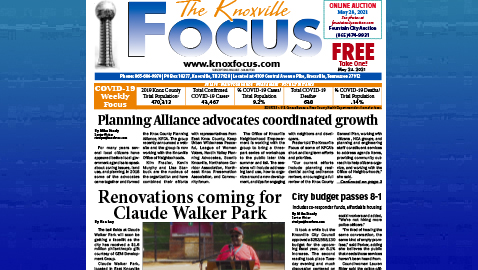 The ball fields at Claude Walker Park will soon be getting a facelift as the city has received a $1.6 million philanthropic gift courtesy of GEM Development Group.

The gift is earmarked to improve Claude Walker Park and contains a pair of key components.

The additional funds will be utilized to provide a recurring operational investment in youth sports at the park, including the formation and support of youth sports commissions in Knoxville.

Some of the money will also be used to provide uniforms and sports equipment for athletes.

Both components of the gift will be managed by Knoxville’s Emerald Youth Foundation, an inner-city youth ministry.

Claude Walker Park will continue to be operated by the City of Knoxville. The renovations will be performed by Elite Diversified Construction. Construction at the facility is expected to begin in the fall.

GEM Community Development President and Chicago resident Steve Davis, who grew up in East Knoxville before going on to play football at the University of Tennessee under legendary head coach Johnny Majors, was thrilled to return home for the renovation announcement, which was celebrated in a ceremony on Monday, May 17 at the park.

“I’m here today because I grew up a couple of streets over from the park,” Davis said. “I played little league football in this park.

“Today is an exciting day for the children in our city. As a young person who grew up in Knoxville myself, I know firsthand the value these fields have brought over decades and decades of play. After many years of heavy use, the fields are in need of improvement. We believe this investment will help transform them into a world-class facility for our city’s young people.”

Willie Anderson, who has helped run the park for the last three decades and has deep roots in the East Knoxville Community and at Austin-East, said he’s pleased and also noted that recent events at Austin-East and in the neighborhood have prompted opposing teams not to play in the area.

“In my wildest dreams, I never could have imagined someone coming along to invest over $1 million in these fields,” Anderson said. “Recently, we’ve had games scheduled and other teams from across our city have refused to play here.

“That is troubling for a number of reasons, but mostly it’s disappointing for our young people who so desperately need an outlet to just play and have fun. Today changes all of that.”