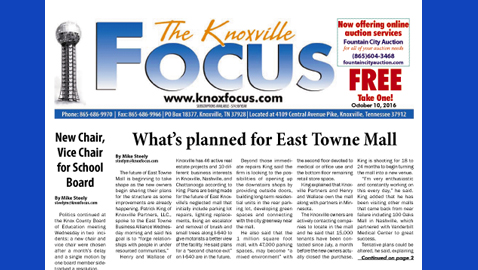 The future of East Towne Mall is beginning to take shape as the new owners begin sharing their plans for the structure as some improvements are already happening. Patrick King of Knoxville Partners, LLC., spoke to the East Towne Business Alliance Wednesday morning and said his goal is to “forge relationships with people in under resourced communities.”

Henry and Wallace of Knoxville has 46 active real estate projects and 10 different business interests in Knoxville, Nashville, and Chattanooga according to King. Plans are being made for the future of East Knoxville’s neglected mall that initially include parking lot repairs, lighting replacements, fixing an escalator and removal of brush and small trees along I-640 to give motorists a better view of the facility. He said plans for a “second chance exit” on I-640 are in the future.

Beyond those immediate repairs King said the firm is looking to the possibilities of opening up the downstairs shops by providing outside doors, building long-term residential units in the rear parking lot, developing green spaces and connecting with the city greenway near the mall.

He also said that the 1 million square foot mall, with 47,000 parking spaces, may become “a mixed environment” with the second floor devoted to medical or office use and the bottom floor remaining retail store space.

King explained that Knoxville Partners and Henry and Wallace own the mall along with partners in Minnesota.

The Knoxville owners are actively contacting companies to locate in the mall and he said that 15,000 tenants have been contacted since July, a month before the new owners actually closed the purchase. King is shooting for 18 to 24 months to begin turning the mall into a new venue.

“I’m very enthusiastic and constantly working on this every day,” he said. King added that he has been visiting other malls that came back from near failure including 100 Oaks Mall in Nashville, which partnered with Vanderbilt Medical Center to great success.

Tentative plans could be altered, he said, explaining that if a company like Google said it needed 200,000 square feet of space then, “We’d say we’re not doing medical anymore.”

King also said that the mall, which will apparently not be called “Knoxville Center” but revert to the East Towne, will serve the diverse East Knoxville community and also reach out to the adjoining counties to draw customers.