By design on February 10, 2013Comments Off on The Tennessee Gentleman: Governor Jim Nance McCord 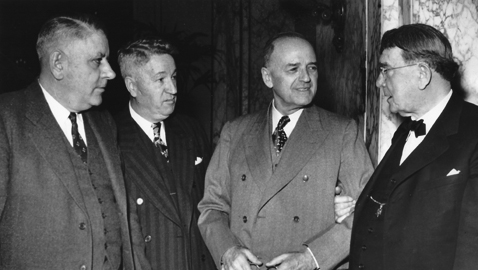 By Ray Hill
Jim Nance McCord is yet another figure from Tennessee’s political history who is little remembered today.  Yet he was both a Congressman and governor; he also served in the Cabinet of Governor Frank Clement.

Jim McCord was born in 1879 in Bedford County, Tennessee.  McCord left the family farm when only seventeen and supported himself as a traveling salesman.  Visiting the homes of many rural Tennesseans while attempting to sell his wares, Jim McCord learned a great deal about his customers.  After ten years, McCord gave up his sales route to become a newspaperman.  McCord was the editor and publisher of the Lewisburg Marshall Gazette.  Profoundly interested in agricultural issues, Jim McCord used his paper to promote agricultural reform.

Jim McCord quickly became one of the leading citizens of his community and was elected Mayor of Lewisburg, an office he would hold for decades.  Clearly he remained popular with his friends and neighbors as they elected him mayor a total of thirteen times.  While serving as Mayor of Lewisburg, McCord was also elected to the Marshall County Court, the equivalent of the County Commission.  McCord remained on the Marshall County Court for almost thirty years.

McCord was also deeply interested in livestock; he became something of an expert on both Jersey cattle and Tennessee Walking horses.  An excellent public speaker, McCord was soon active as an auctioneer of Tennessee livestock.

Jim McCord urged Senator McKellar and others to locate a facility for dairy operations in Lewisburg.  McKellar pushed the project, which was located near Lewisburg and is today a part of the University of Tennessee’s agricultural program.  McCord’s promotion of Jersey cattle helped to make Lewisburg an important dairy producing area.

In 1942, Jim McCord was quite nearly sixty-four years old.  The Fifth District Congressional seat was vacant and McCord announced he would be a candidate.  McCord’s popularity was such that he ran unopposed in the Democratic primary.  In a district where one would have great difficulty in assembling a couple of Republicans, the lack of opposition to Jim McCord was quite a feat.

McCord went to Washington where he served for only one term in Congress.  Doubtless McCord could have been reelected easily, but he had his eye on another office: Jim McCord wanted to be governor.

McCord had been strongly allied with K. D. McKellar and the powerful senator’s support was soon forthcoming.  McKellar’s personal friend and political partner, E. H. Crump, leader of the Shelby County political machine soon followed with his own endorsement.

The McKellar – Crump combine had dominated Tennessee politics since 1932 and once again McCord entered the Democratic primary without opposition.

During his tenure as governor, Jim McCord became known for his strong support for education.  Governor McCord insisted the Tennessee General Assembly appropriate more funding for education and teachers across the Volunteer State saw bigger paychecks.

McCord wanted a second two-year term in 1946 and ran on a ticket with Senator McKellar and Andrew “Tip” Taylor for Utilities Commissioner.  McKellar was then seventy-seven years old and seeking his six term as senator.  Senator McKellar had been frequently ill and despite regular announcements that he was coming home to Tennessee, McKellar remained in Washington, D. C. for the duration of the campaign.

The McCord – McKellar ticket was fiercely opposed in the Democratic primary.  Both Governor McCord and Senator McKellar drew serious opposition inside their own party.  Former Governor Gordon Browning, although still in Europe as part of the United States occupational forces, was on the ballot to oppose McCord.  Edward Ward “Ned” Carmack, son of the martyred senator, had quite nearly defeated Tennessee’s junior United States Senator Tom Stewart in the 1942 primary.  He was running against McKellar whom he accused of being an enemy of the Tennessee Valley Authority.

With Senator McKellar keeping an eye on his campaign from the Capitol, the burden of much of the campaigning fell on the shoulders of Governor Jim McCord.

The governor spoke often and well throughout Tennessee.  Both he and Senator McKellar won convincing victories in the Democratic primary.

During his second term, McCord again turned his attention to education.  Feeling there was a need for greater funding of education, he proposed that Tennessee have a sales tax.  Mr. Crump had long been vehemently opposed to a sales tax and the governor set out for Memphis, where he met with Crump and outlined the need for more funding for education.  The Memphis Boss reluctantly agreed to support a sales tax and the necessary legislation passed the Tennessee General Assembly, which also included a retirement system for teachers.  The first widespread use of free textbooks for children was also a result of the governor’s efforts and the implementation of the sales tax.

Tennessee voters were singularly ungrateful as Governor McCord sought a third two-year term in 1948.  He was again challenged by former Governor Gordon Browning, who was back in Tennessee and campaigning actively for the Democratic nomination.  McCord’s political woes were exacerbated by E. H. Crump’s refusal to back Senator Tom Stewart for another term.

Crump had been appalled when Stewart had lost the primary in 1942 until the ballots from Shelby County had been tallied.  Some of the Memphis Boss’s associates had urged Crump to support another candidate and most believed Stewart would merely quietly retire.  Stewart issued a fiery statement saying he was running, with or without Crump’s personal support.

Crump’s decision not to support Senator Stewart opened an opportunity for Chattanooga Congressman Estes Kefauver to run for the Senate.  Crump gave his own support to Cookeville Judge John A. Mitchell, a man he had never even met.

Crump strongly supported McCord for reelection, but he had given aid to his enemies with his decision to dump Senator Stewart.  McCord found carrying the burden of having supported the sales tax to be an anchor around his neck.  It finally proved to be too much for McCord to overcome.

Browning’s majority in Davidson County, where he had the strong support of the Nashville Tennessean, was humiliating to the incumbent governor.  Browning won more than 22,000 votes to only 8,000 some odd votes for Governor McCord.

The extent of McCord’s loss by almost 60,000 votes was indicated by the fact he only carried his home county of Marshall by less than 300 votes.

Senator Stewart also lost and for the first time in almost two decades, the power of the McKellar – Crump alliance had been broken.

McCord returned to his business interests in Lewisburg and was one of three former governors elected to serve as a delegate to Tennessee’s revision of its Constitution in 1953.

Jim McCord strongly supported the candidacy of young Frank Clement against his old foe Gordon Browning in 1952.  With Clement’s victory, McCord was invited to join the Cabinet as Commissioner of Conservation.

The former governor’s last political hurrah was a quixotic bid for governor in 1958.  Rather than run in the Democratic primary, Jim McCord sought election as an Independent against a fellow member of Governor Frank Clement’s Cabinet, Buford Ellington.

McCord was almost eighty when he ran for governor the last time and he campaigned hard in the general election.  Tennessee was then still a largely one-party state and McCord won only 32% of the vote against Ellington.  Still, it was an impressive feat for an “Independent” to accumulate almost a third of the vote.  It was an indication of some dissatisfaction with Ellington, as well as a tribute to the old campaigner’s ability and personal popularity.

Following his loss in 1958, Jim McCord returned to his Lewisburg home.  His wife of more than fifty years had died in 1953 and McCord found some happiness when he remarried.  The former governor remained quite active, especially enjoying reunions of Tennessee’s former governors.

Jim McCord died on September 2, 1968 and was eighty-nine years old.

Governor McCord was by all accounts a pleasant man, an excellent public speaker and left behind a record of solid achievement as Tennessee’s chief executive.  While many Tennesseans did not appreciate the increased taxes of Jim McCord’s administration, the funding secured by McCord for education made possible huge advances in education for all citizens.  Much of the modern structure of education in Tennessee can be attributed to the efforts of Jim Nance McCord.