By design on April 22, 2012Comments Off on The World Came to Knoxville 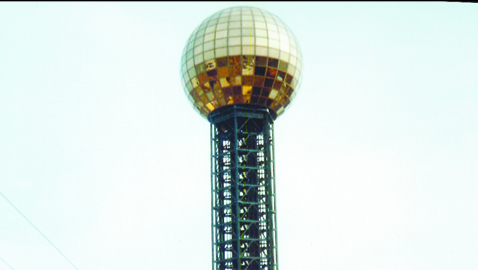 For one entire summer, I walked the route every day on my way to work. I would leave The University of Tennessee campus and head up Cumberland Avenue. As I started up the hill toward Henley Street, I would often cast a glance toward Bradley’s Steak House on the left. I could never have imagined then how differently the site would look nine years later.

“You’ve got to be there” was the slogan used to promote the 1982 World’s Fair. “There” referred to Knoxville, which had been dubbed by some media as the “scruffy little city.” However, city officials and World’s Fair Committee members seemed determined to change that image; and on May 1, 1982, the “scruffy little city” welcomed the world to Knoxville.

It was a beautiful May day when we watched the opening day festivities on television. Seeing the United States President, Ronald Reagan, in attendance was especially exciting. As the pavilion names for the visiting countries were read, World’s Fair employees—neatly dressed in white uniforms with a military flair—escorted them. The towering Sunsphere, with its golden globe top, was billed as the main attraction and was later seen in the opening segment of the Miss USA Pageant.

The fair brought sights and sounds that would become a part of our daily lives for the six-month period, such as the Waters of the World lined with festive flags. The Energy Express could be heard as it canvassed the grounds, and even now I can hear the catchy tune playing in my head. New life came to the landmark Candy Factory building with restaurants and gift shops. The fair brought us the Belgian waffle, See’s Candies, and Petros–which featured the meal served in a corn chips bag.

Early in September, stories surfaced in the media that some visitors to “The Fair” were misdirected to the TVA&I (Tennessee Valley Agricultural & Industrial) Fair on the grounds of Chilhowee Park! The massive crowds dwindled near the close of the World’s Fair, leaving the locals with mostly stories, memories, and the World’s Fair Park. But, for six festive-filled months, millions came to Knoxville—the “scruffy little city.”

The World Came to Knoxville added by design on April 22, 2012
View all posts by design →