The 1924 Senate Race in Tennessee, II 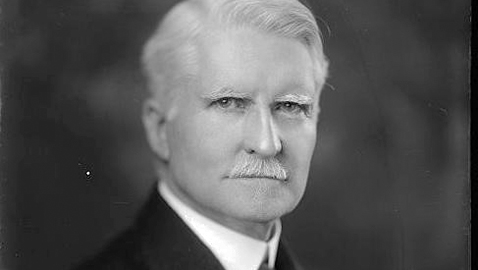 Tennessee’s senior United States senator, John Knight Shields, was a candidate for a third term in 1924.  Shields faced two formidable opponents inside the Democratic primary: General Lawrence D. Tyson of Knoxville and former state Supreme Court Justice Nathan L. Bachman of Chattanooga.  All three candidates hailed from East Tennessee and Shields was under fire from his opponents for having been less than supportive of the late President Woodrow Wilson and the League of Nations.  Shields had oftentimes voted with Republicans in the U. S. Senate in supporting reservations to the Treaty of Versailles, which had infuriated Wilson.  The former president had scathingly denounced Shields as one of the “least trustworthy” people in public life he had ever known.  Wilson had died February 3, 1924 and the former president remained highly popular in Tennessee.  Few believed Shields could be renominated facing one serious opponent, but with two credible candidates seeking the Democratic nomination, many worried Shields might be reelected with a plurality of the votes.

The campaign for the senatorial nomination was well under way by March of 1924, which was highly unusual for the time.  Judge Bachman continued to press for a debate between the candidates.  Senator Shields stubbornly remained in Washington, claiming the press of senatorial business.  Campaigning in Cookeville, Bachman fired off a telegram noting Shields had made time to come home to Tennessee during his 1918 reelection campaign, while the United States was fighting a World War.  Bachman also pointed out Senator Kenneth McKellar had returned to Tennessee in 1922 to give an account of his own record.  Not surprisingly, Senator Shields had dismissed Bachman’s proposal for a debate, causing the judge to say he was “very much disappointed at your refusal to accede to what under existing political conditions in Tennessee must be regarded a very reasonable suggestion.”

Senator Shields was hardly so busy with his senatorial duties that he did not have time to pay attention to his reelection campaign.  Shields noted Lawrence D. Tyson had bought the Knoxville Sentinel in an effort to promote his own senatorial ambitions.  Shields opined Tyson had spent as much as a million dollars to purchase the Sentinel and had used the newspaper to advertise former justice of the U. S. Supreme Court John H. Clarke’s call for the senator’s defeat.  Shields snorted Clarke had resigned from the high court “to the gratification of the whole country” to assume a position as president of the League of Nations Association.  Shields noted the membership of Clarke’s organization included not a few prominent Republicans, not the least of which were former members of President William Howard Taft’s cabinet.  Shields raised the issue of those same Republicans hoped to see a weak senatorial nominee in Tennessee who could be defeated by the GOP candidate in the fall.  Senator Shields noted neither Tyson nor Judge Bachman stated in their own campaign platforms they would support American participation in the League of Nations.  Shields also pointed out William Gibbs McAdoo, the frontrunner for the Democratic presidential nomination in 1924, as well as the late Woodrow Wilson’s son-in-law, had called for a new international conference of all nations instead of supporting the League of Nations.  “Mr. McAdoo has thus placed himself clearly in line with my position stated in the United States senate November 19, 1919 in discussing the League of Nations,” Shields claimed.  Shields reminded Tennesseans he believed in peace and hated war “and the horrible suffering it brings to mankind.”  John Knight Shields insisted his actions as a senator from Tennessee had been consistent with the principles of the Democratic Party.  Senator Shields believed once the people of Tennessee saw through the “misrepresentations” about his record, “they will do justice to one who has served them honestly and to the best of his judgment as God gave him the light to see right.”

Columnist T. H. Alexander, writing for Luke Lea’s Nashville Tennessean, gloated Shields “hasn’t got enough positive support in Tennessee to wad a double-barreled shotgun.”  Lea and Shields had served together in the U. S. Senate and did not get along.  In fact, Luke Lea and John Knight Shields loathed one another.  Shields had backed then-Congressman Kenneth D. McKellar against Senator Lea inside the Democratic primary and had been delighted when his senior colleague had been defeated.  Lea used his newspaper mercilessly to criticize John Knight Shields during the 1924 senatorial campaign.  The Tennessean gleefully reported every county convention boosting the record of Governor Austin Peay and condemning that of Senator John K. Shields.  When Warren County Democrats lauded Governor Peay for approving “every act and policy of the late Woodrow Wilson”, the Tennessean noted the disapproval of John Knight Shields.  Warren County Democrats had openly said they could not countenance the reelection of Senator Shields who stubbornly “refused to yield his personal opinion to those of the great war President.”

Rayburn R. Rose of Union City wrote, “The sap will then rise for all candidates except Senator Shields.  The political barometer for the senior Senator indicates a cold wave, followed by storms and cyclones of criticism.  The local Democratic weather bureau forecasts unsettled weather for the senior Senator in Obion county with the political temperature below freezing until his defeat August 7.”

Supporters of Senator John K. Shields were heartened when Williston M. Cox was reelected as chairman of the Knox County Democratic Party.  Cox, allied with Senator Shields, had faced opposition from supporters of General Lawrence D. Tyson as well as those of presidential candidate William G. McAdoo, who had been born in Knoxville.  The Tennessean sympathetically concluded the “machine” and “the professional politicians” had overwhelmed the insurgents.  Even in General Tyson’s home precinct, his supporters lost on a vote of 127 – 102.

Yet Lawrence D. Tyson was no mere soldier.  He had been elected to the Tennessee House of Representatives in 1902 and was immediately elected Speaker of the House when the legislature convened in 1903.  Tyson served only a single term in the Tennessee General Assembly, but had been promoted as a candidate for the U. S. Senate in 1913, a contest decided by the legislature.  Tyson had lost that election to John Knight Shields.  The General had no intention of losing again and his campaign was amply funded, quite likely mostly through Tyson’s own considerable personal resources.

The minor loss in Knoxville did nothing to deter General Tyson’s bid to go to the United States Senate.  The General opened his campaign in West Tennessee and spared his opponents nothing.

Speaking before a crowd estimated at 5,000 people in Trenton, Tennessee, Tyson flayed Senator John Knight Shields.  “We are all offering ourselves as candidates in the Democratic primary and upon our records as Democrats.  A man who is not a Democrat has no right to offer himself in the primary,” Tyson told his audience. Tyson used a letter written by the late former president Woodrow Wilson to W. A. S. Furlow of Bristol, Tennessee.  The missive included the deadly statement Wilson “regarded Mr. Shields during my administrations as one of the least trustworthy of my professed supporters.”  Tyson was quick to point out the late president believed Senator Shields to have been untrustworthy during both of his administrations.  Tyson did not ignore Nathan Bachman.  The sixty-three year-old Tyson noted Bachman had been born in 1878, causing the General to say the former justice was a “young man.”  “I am 16 years older than Judge Bachman.  I could go to the U. S. Senate and serve two terms and Judge Bachman would then be a younger man than I am now,” Tyson said.

General Tyson went on to critique Bachman’s record on the Tennessee Supreme Court.  Tyson’s conclusion was that Bachman “did only about a fifth as much work as any other well man on the bench.”  Tyson was also critical of Nathan Bachman having resigned from the Supreme Court to run for the U. S. Senate.  “What would the people of Tennessee have thought of me if I had resigned my position of brigadier general in France and come home to run for political office?” Tyson cried.  The General asserted, “In order that a man shall have a claim on the suffrage of the people when he asks for a high office, he should either be a man of extraordinary ability and especially fitted for the office he seeks or he should have performed some extraordinary service and made extraordinary sacrifices for his country.”  Evidently, Lawrence D. Tyson did not think Nathan Bachman met that standard.  “What special service has he performed and what sacrifice has he made for his country?” Tyson demanded.

Tyson was not merely referring to his own experience as a soldier.  Tyson could speak with both conviction and emotion on the topic of sacrificing for one’s country.  Tyson’s only son, Charles McGhee Tyson, had been a Navy pilot during the First World War.  Young Tyson disappeared during a mission over the North Sea and it was only after Germany’s surrender that the General was able to locate his son’s body.  General Tyson was finally able to ship his son’s body back home to Knoxville for burial.  Few other candidates for any office could match Tyson in experiencing gut-wrenching loss and sacrifice.

As might be expected by a former general, Tyson’s speech was threaded with references to the military and military analogies.  In condemning Senator Shields, Tyson thundered his opponent was a “traitor” to the Democratic Party in that “supreme hour when the treaty was rejected and the fate of the world again put in jeopardy, making the blood that had been shed by our boys beyond the seas on the bloody battlefields of France and the agony that had been endured there to have been all in vain.”

Lawrence D. Tyson closed his speech in Trenton with a direct appeal to the patriotism of Tennesseans, reminding his audience Tennessee was known as the “Volunteer State” for a good reason.  “It is the most patriotic state in the Union,” Tyson said.  “It has always loved and honored the men who went out and fought and died for their country.  The World War soldiers have had but little recognition for high places.”  “This may be largely due to the fact that they have not offered themselves for high office,” the General added.

Describing himself as “a soldier, a lawyer and a businessman,” Tyson said he was not asking to be sent to represent Tennessee in the United States Senate “simply because I have been a soldier” and hoped Tennesseans would view his “whole record” in determining who was best fitted to serve Tennessee in the Senate.

While John Knight Shields had the advantage of incumbency, like any incumbent Shields had a record, which oftentimes inflamed opposition.  William R. Webb, headmaster of the famous Webb School in Bell Buckle, Tennessee, as well as a former member of the U. S. Senate by virtue of appointment, was one of those deeply disappointed with Senator Shields.  When asked whom he was supporting in the 1924 election, Webb bellowed, “Anybody to beat John K. Shields.”  Professor Webb explained Shields had been elected to the U. S. Senate by Tennessee’s “temperance Democrats.”  “As soon as he got into office he turned his back on us,” the old professor huffed.  Webb said he had not made up his mind whom he would vote for, as he was trying to figure out whether Tyson or Bachman was the strongest candidate to defeat Shields.  “What I am interested in doing,” Professor Webb said, “is to retire Senator Shields to the calm and peace of his 8,000 acre farm in Grainger County.”