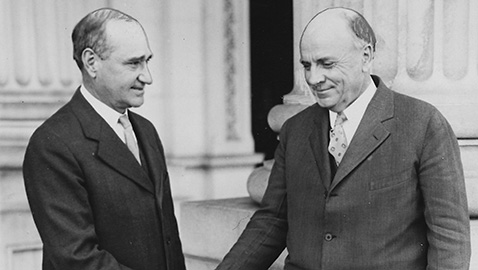 Kenneth D. McKellar, Tennessee’s senior United States senator, had won a thumping renomination inside the Democratic primary, beating Congressman Finis Garrett, the Minority Leader of the U. S. House of Representatives.  Tennessee Republicans had nominated James A. Fowler, the mayor of Knoxville, to run in the general election.  One of the most able lawyers in the country, Fowler was a credible candidate at a time when Democrats faced profound challenges in electing their presidential nominee, Alfred E. Smith, the governor of New York.  A product of New York’s Tammany Hall political organization, Smith was a derby-wearing, cigar chomping urban Democrat with a voice that was peculiarly strange to most Southerners.  The South was the most solidly Democratic region in the country and Smith’s Catholicism was more than a little unsettling to many Southern Democrats who were almost entirely Protestant in their religion.  The Democratic Party was very nearly a religion of its own in the South, but there were signs some Democrats feared a Catholic nominee more than electing a Republican president.  Senator Furnifold M. Simmons of North Carolina bolted the party, refusing to support Alfred E. Smith.  Simmons was the leader of a potent and powerful political machine in his state and had served in the United States Senate for quite nearly thirty years.  Senator Tom Heflin of Alabama, snarling about the “Pope of Rome”, rejected Smith’s nomination and there was a very real danger the deep South state might actually vote for the GOP nominee, Herbert Hoover.  Some Southern officeholders merely held their tongues or disappeared from the political stump.  Others campaigned for the state ticket with little or no mention of Smith’s presidential candidacy.  Not so for Senator K. D. McKellar.  As McKellar began the general election campaign, he enthusiastically endorsed the candidacy of Alfred E. Smith.  The Presbyterian McKellar tried hard to assuage the fears of some of his constituents and during his speaking throughout Tennessee, said little about his own candidacy, preferring instead to promote Smith.

Naturally, Republicans sensed Smith’s weakness in the South and James A. Fowler launched a full-fledged campaign to replace K. D. McKellar in the U. S. Senate.  Opening his campaign in Maryville, Tennessee, the Knoxvillian began a twenty-day speaking tour of the state.  Democrats, too, realized Smith’s vulnerabilities and mobilized an impressive list of speakers, including McKellar and his junior colleague from Tennessee, Lawrence D. Tyson.  Georgia congressmen Eugene E. Cox and Charles R. Crisp were welcomed into Tennessee to speak on behalf of the Democratic ticket.  Former U. S. senator James Hamilton Lewis, a pink whiskered orator of rare talent came to the Volunteer State to promote Democratic fortunes.  Senator Morris Sheppard, the senatorial father of national prohibition, left his Texas home to come to Tennessee.  The Republicans sent some of their most noteworthy and able campaigners into Tennessee on behalf of Hoover and the state ticket.  William E. Borah, the “Lion of Idaho”, came to Tennessee, along with Colonel Theodore Roosevelt, the son and namesake of the late president.  One of the more interesting Republican speakers came to Knoxville on behalf of the GOP cause, Assistant U. S. Attorney General Mabel Walker Willebrandt, “the First Lady of Law.”  Only the second woman to serve as an Assistant Attorney General of the United States, Mrs. Willebrandt came to campaign for Herbert Hoover.

James A. Fowler spoke in Celina, Tennessee and declared the only real issue of the campaign was prohibition.  Fowler was critical of Governor Alfred E. Smith who was opposed to prohibition, being dripping “wet.”  Celina was in the Fourth Congressional district, which was represented by Cordell Hull and solidly Democratic.  Apparently Fowler’s speech did not overly impress many local Democrats, who promptly formed an Al Smith for President Club immediately following his address.

Fowler spoke to a “Democrats for Hoover” gathering in Murfreesboro, which put him on the same program as Democratic Congressman E. E. Eslick.  Speaking in Huntingdon, Tennessee, Fowler claimed the nomination of Al Smith was nothing less than a plot by those opposed to national prohibition.  As the campaigned progressed, Fowler stressed support for GOP presidential nominee Herbert Hoover more than himself.  The Knoxville mayor did make the occasional criticism of Senator McKellar, usually for McKellar’s “inconsistency” in supporting the “wet” candidacy of Alfred E. Smith.

Senator McKellar made a public commitment to campaign throughout Tennessee on behalf of his ticket mates.  In his hometown of Memphis the senator announced he would make a swing through Paris, Tennessee then travel to Jasper, South Pittsburgh, and Cookeville.  Campaigning in Paris, McKellar, anticipating the arrival of GOP presidential nominee Herbert Hoover in Elizabethton, gave the candidate thirteen questions to answer.  The first was would Hoover, if elected president, appoint Andrew Mellon Secretary of the Treasury?  Mellon, a multimillionaire industrialist, had served as Treasury secretary throughout the administrations of Presidents Harding and Coolidge.  Mellon was a particular and frequent target of the Tennessee senator’s political ire, as he considered the Secretary of the Treasury to be an extension of and spokesman for big business.  McKellar stopped off in Bolivar, Tennessee to fill a speaking date that was originally intended for former U. S. senator Gilbert Hitchcock of Nebraska.  Senator McKellar thoroughly assailed the Republican administrations of Warren G. Harding and Calvin Coolidge.  McKellar praised Alfred E. Smith’s own record as governor of New York and urged his audience, “Keep the Solid South more solid than ever, and show them that we are not divided.”

During his speeches in early October, McKellar attempted to allay the fears of Democrats who worried Al Smith would wreak havoc upon the prohibition laws.  McKellar declared Smith was forthright and honest in his own personal opposition to prohibition, but the New York governor had pledged to follow the law so long as it was on the books.  Furthermore, McKellar said as president, Smith could not change the law because the Senate of the United States would not permit it.

McKellar’s junior colleague, Senator L. D. Tyson of Knoxville, while campaigning in Trenton, Tennessee, deplored the notion of electing Herbert Hoover president of the United States.  During his two hour speech, Tyson stressed Hoover was untried and indulged in what could only be an egregious oratorical excess when he called “Tammany Hall the beacon light of the Democracy of the north.”

Speaking in Davidson County, McKellar was greeted with “sustained cheering” when he declared, “We have got the enemy on the run.”  The senator asked for a show of hands of those who believed Herbert Hoover was identified with any prohibitionist movement.  “I see no hands and I didn’t expect any,” McKellar sneered, “for Hoover has never been a prohibitionist, is not now a prohibitionist and will never be a prohibitionist.”

Senator McKellar was certainly sincere in his prohibitionist sentiment as he had witnessed members of his close family victimized by alcohol.  McKellar’s younger brother and secretary, Don, had an affinity and fondness for strong drink that caused the senator much anguish.  Senator McKellar was, in fact, a teetotaler.

McKellar was the featured speaker in Trenton for Gibson and Dyer County Democrats where he once again flayed Herbert Hoover and begged Democrats to vote for Alfred E. Smith.  Flags festooned businesses, brass bands played and a large crowd surged inside the courthouse to hear the senator.  McKellar delighted his dry observation he had known Hoover ever since the latter had become an American citizen, a period of some eleven years.  Senator McKellar detailed the many foreign locales Hoover had worked as an engineer, which included “China, Russia, India, Australia, and Great Britain” had all been home to “the Great Engineer.”  “In Russia,” McKellar said, “he was engaged in the oil engineering business”, which he thought “a very congenial business for a Republican engineer.”  McKellar even belittled Hoover’s accomplishment in feeding much of Europe following the devastation of the First World War.  Pointing out that Republican U. S. senator William E. Borah of Idaho had mistrusted Hoover with a $100,000,000 fund in 1919, snapped, “Borah was right.  Not only was Hoover the automation of the meat trust, sugar trust and bread trust, as Borah alleged, but many other trusts also.”

Kenneth D. McKellar and most loyal Democrats were deeply disappointed by the election results in Tennessee.  Herbert Hoover carried the Volunteer State 195,195 votes to Alfred E. Smith’s 156,169.  Even in E. H. Crump’s Shelby County, the Memphis Boss was able to deliver a majority to Smith of some 6,500 votes.  Hoover carried rock solid Democratic Davidson County 15,322 to Smith’s 13,442.  Hoover carried Hamilton and Knox Counties by an even greater margin.  Herbert Hoover tallied 14,627 votes in Knox County to a paltry 5,767 for Alfred E. Smith.

Unlike the Democratic disaster of 1920, Democrats fared much better statewide than New York’s “Happy Warrior.”  Governor Henry Horton won a term in his own right, beating GOP gubernatorial nominee Raleigh Hopkins 195,546 to 124,733.  Senator K. D. McKellar won a third term, defeating James A. Fowler 175,431 to 120,289.  McKellar roughly 60% of the vote as Alfred E. Smith could muster only 46% of Tennessee’s vote.  Horton earned approximately 61% of the vote against the weakest nominee on the Republican ticket.

McKellar, answering friends who wrote to congratulate him on his victory, lamented Smith’s defeat.  Smith even lost his home state of New York to Hoover.

Senator Kenneth McKellar would never reconcile himself to Herbert Hoover’s presidency.  McKellar continued to be one of Andrew Mellon’s most vocal critics in the United States Senate and he would relentlessly deride and criticize Hoover.  Senator McKellar would become one of the first senators to endorse the presidential candidacy of New York governor Franklin D. Roosevelt.  McKellar and his political allies would deliver the Volunteer State to Roosevelt at the Democratic National Convention in 1932.  McKellar became one of the most influential of New Deal senators and heartily approved of President Franklin Roosevelt’s selection of his junior colleague Cordell Hull to serve as Secretary of State.  K. D. McKellar would go on to serve Tennessee in the United States Senate until his defeat in 1952, becoming Tennessee’s longest serving United States senator.