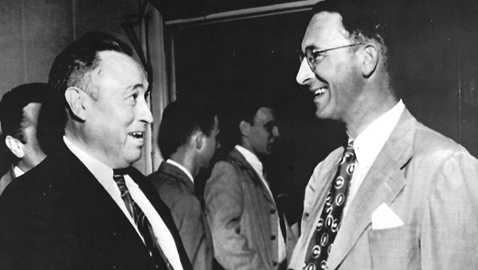 As Tennessee entered the summer months of 1948, Governor Jim Nance McCord and Gordon Browning battled for the Democratic nomination to be chief executive of the state. Any campaign waged by Gordon Browning quickly became hard fought and the genteel McCord found himself hard pressed.

Governor McCord had the support of Tennessee’s ruling faction inside the Democratic Party, led by senior United States senator Kenneth D. McKellar and E. H. Crump, leader of the Shelby County machine. Yet McCord had a heavy burden to carry inside the primary, having induced the state legislature to institute a state sales tax. While 70% of the new sales tax went to fund education and children received free textbooks for the first time in the state’s history, voters did not seem especially grateful. Crump had long been opposed to a state sales tax, but had finally allowed himself to be persuaded by McCord. The governor campaigned all across the state, reminding folks of the many benefits brought about by the revenue generated by the new tax. Nor did Gordon Browning pound McCord for the sales tax; in fact, the former governor readily admitted he would not urge the legislature to repeal the sales tax. Still, the wily Browning knew the voters who bitterly resented the tax would hold Jim McCord accountable. Gordon Browning had no objection to allocating the money himself, once he was governor.

“It is a figment of their brain when they circulate these rumors,” Browning snapped.

Governor McCord, uneasy about the reaction of the voters to the sales tax, had been steadily traveling across Tennessee for a variety of events well before officially announcing his candidacy for a third two-year term in April of 1948. He flew to Bristol to attend a birthday celebration of General Julius Howell, a 102-year old Confederate veteran, “believed to be the lone surviving member of Gen. James Longstreet’s famed corps.”

As Gordon Browning continued to bitterly assail Ed Crump and the Memphis Boss responded with his usual huge paid advertisements in Tennessee newspapers, Governor McCord, speaking in Chattanooga, dared Browning to explain to the voters the details of Browning’s own falling out with Crump in 1937. McCord demanded to know “what it was E. H. Crump told him to do that caused the split.” The governor told his audience, “He can’t tell you that because Mr. Crump made no demands and Browning knows it. Browning broke with Crump because of his own lust for power and the unit vote bill which he put through the legislature proved it.”

Jim McCord was also the first candidate in Tennessee’s history to release a filmed commercial to “a score or more” movie theatres in the state. The film featured the governor speaking directly to movie audiences, promoting his candidacy for reelection. The films were distributed the last two weeks of the campaign.

Tennessee newspapers began taking sides in the primary. The Chattanooga Times came out for Gordon Browning, as did the Knoxville News-Sentinel and the Nashville Tennessean constantly urged the former governor’s election. The editorial endorsing Browning in the Chattanooga Times expressed its opposition to machine rule in Tennessee.

“The Chattanooga Times has a sincere liking for Gov. Jim Nance McCord,” the editorial read. “He is one of the most amiable and personable men we have had in the governor’s office for many years. But there is no prospect that he will ever stand up against Mr. Crump or even Mr. Frank Hobbs when the issue is the people versus the politicians.”

The editorial in the Knoxville News-Sentinel sounded the same theme, while reassuring voters that Browning possessed “great ability as a public administrator.”

“We believe that Browning, as governor, would break the Crump machine and restore Tennessee affairs to public control.

“We believe, in short, that Browning would now make one of the best governors in Tennessee history.”

It was a far cry from the 1938 election when even the Tennessean had deserted Browning and the former governor had been thoroughly denounced by virtually every daily newspaper in the state for the very same issue of dictatorship and heavy-handed tactics.

McCord tried hard to remind voters precisely why they had rejected Gordon Browning at the polls so decisively in 1938. In his second speech during the primary campaign in Cleveland, Tennessee, the governor tried to raise the specter of the hated county unit bill, which Browning had forced through the legislature over the furious opposition of both Senator McKellar and E. H. Crump.

McCord then hurried off to attend the annual Rhododendron Celebration at Roan Mountain, along with Senator Tom Stewart and Stewart’s opponent, Judge John Mitchell.

Browning kept up his verbal barrage, pounding E.H. Crump. The former governor demanded to know if Crump would support the winners of the August Democratic primary. The Republicans were fielding serious candidates for both the governorship and the United States Senate and Browning suspected that Crump would refuse to support him and Congressman Estes Kefauver if they emerged as the victors of the primary campaign.

“I have never voted for a Republican in my life,” the Memphis Boss sputtered, “and never expect to.”

Few missed that Crump’s statement was not a flat denial. The Memphis Boss did sniff, “There is no need for Browning to concern himself about the Democratic nominee. Jim McCord will beat him badly August 5th.”

The war of words between Gordon Browning and Crump continued to escalate, especially when the Memphis Boss published enormous advertisements in many of Tennessee’s daily newspapers. One of the milder passages in the Crump ads was the Memphis Boss’s assertion, “Browning has about as much chance to beat Jim McCord on August 5th as a one legged grasshopper has in a turkey field.”

Crump revived the details of Browning having proposed one of the bigger trades in Tennessee politics; namely that Browning wanted to run for the U. S. Senate in the 1938 special election, if Crump would support him and Lewis Pope for governor. In turn, Browning would support Crump in 1940 against Senator McKellar. It was a preposterous proposition, especially as Crump loathed Lewis Pope and it was quite unlikely that he would turn on his friend, K. D. McKellar. Although Browning vehemently denied Crump’s version of his visit to the Memphis Boss in 1937, there was more ring of truth in Crump’s account than Browning’s own. After recounting Browning’s proposal, Crump concluded one ad with, “In some respects Browning is a very, very bad man. In others, he is worse.”

Crump reminded readers that in 1936 Gordon Browning had said, “that I was an honorable and worthy man; Memphis a fine and well governed city, and that ‘The only people who have any grievance against Mr. Crump are those who want dishonesty in state government.’”

The Memphis Boss reprinted remarks made by Browning as he campaigned for governor in 1936 in Tiptonville.

“Two years ago when Mr. Crump aided in my defeat for the Senate I did not whimper about it and did not attempt to criticize him and abuse him for his action. Two weeks ago my opponent thought that Mr. Crump was sprouting wings. He was a gentleman, a statesman and a scholar to Dossett then, but when he came out for me, Mr. Crump suddenly became the state’s worst enemy. I am getting tired of demagogues running around the state trying to prejudice the country against the city. I want to get rid of that sort of humbug for it has no place in Tennessee politics.”

Browning was hardly embarrassed by the reminder and in fact, while speaking at Madisonville, declared he believed the Crump advertisements were helping his campaign. It was there Browning tried turning the issue to whether Crump would support the winners of the Democratic primary. Campaigning in Benton, Browning chortled, the Crump ads were “the best advertisement I’ve had during the campaign for governor.”

The former governor cited the Crump advertisements as proof the governor’s race was between “Crump and me”, rather than between “McCord and me.”

The bitter fight between Crump and Browning certainly did overshadow Governor McCord, who kept plugging the sales tax in his campaign appearances. While speaking in Union City, McCord predicted if the sales tax were not repealed during the next four years, there would not be a single poor school building or “ramshackle” school bus in Tennessee.

Senator McKellar, having returned to Washington, D.C., issued an announcement he would cast his own absentee ballot for Governor Jim McCord and Judge John A. Mitchell for the United States Senate. Yet, for the first time in two decades, much of the McKellar organization simply ignored the senator’s wishes. Many of the most important McKellar supporters in the state refused to abandon Senator Tom Stewart for Judge Mitchell. Herbert S. “Hub” Walters, Tennessee’s Democratic National Committeeman and millionaire businessman, was as close to Senator McKellar as anyone, but he backed Stewart. Tennessee’s “Unholy Trinity” in the state legislature – – – James “Mr. Jim” Cummins of tiny Woodbury, Tennessee, I. D. Beasley of Carthage, and Walter “Pete” Haynes of Winchester, all worked hard for Tom Stewart. McKellar, frequently ill, could do very little to bring his friends and supporters in line for an obscure judge from Middle Tennessee. Stewart had worked steadily at his job and had done quite a few favors of his own for Tennesseans.

Ed Crump had overreached and it had backfired.

McCord had carried only upper East Tennessee, where Senator McKellar’s organization was quite strong, and Crump’s Shelby County. Gordon Browning won decisively. Estes Kefauver won the Democratic nomination for the U. S. Senate with a plurality of the vote.

Governor McCord was gracious in defeat.

“I made a clean campaign and accept the verdict of the party, and shall lend every aid to its complete success in the November election,” McCord promised.

In Washington, when queried by reporters about the extent of the defeat of Governor Jim McCord and Judge Mitchell, Senator K. D. McKellar seemed stunned.

“There is nothing for me to say,” McKellar said, before adding, “Three of the best Democrats in the state were defeated. That’s all.”

Senator McKellar was obviously referring to Jim McCord and John Mitchell in his statement, which begged the question of who was the third Democrat? He never did elaborate as to whether he meant his colleague Tom Stewart or his friend E. H. Crump.