By design on February 14, 2021Comments Off on A-E’s Smith wants to succeed on and off the field 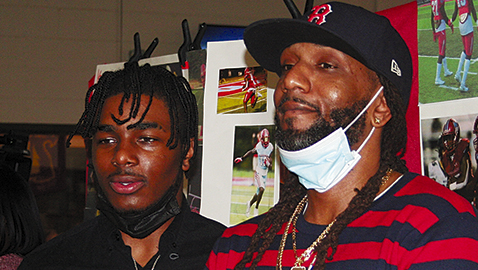 The tone of Ke’on Smith’s football signing ceremony with Campbell University last week had as much to do with academics as athletics.

Austin-East High Principal Nathan Langlois punctuated his opening remarks with letting Ke’on know he wanted an invitation to his college graduation and that he would be there for it.

“Graduating from college is what this is really all about,” Langlois said.

Alvin Armstead, the school’s athletic director, followed up and reminded Smith his first priority in college was to be a student-athlete. “The big thing is to stick to it and finish the task.”

Many of his Roadrunner teammates watched in the school’s library Thursday as Smith signed scholarship papers with Campbell, a NCAA Division I FCS member which is located in central North Carolina about 30 miles from Raleigh, the state’s capitol.

The 5-11, 180-pounder stepped in and played most of his senior year at A-E as a replacement quarterback but will be a wide receiver for the Fighting Camels, who play in the Big South Conference.

In the recruiting process, Ke’on was impressed with Campbell’s coaching staff.

“When they started recruiting me, they stayed in touch a lot,” he said. “Every coach has watched my film and told me they liked it.

“The head coach (Mike Mintor) is a great man. He just made me feel like I was going to be home again.”

Smith, who has a 2.75 GPA, wants to be successful in college on and off the field. “I want to get in and play and then focus on my academics. I want to graduate in college and come back and give to the community.”

He said he’s been thinking about majoring in sports medicine. “I just want to stay connected with sports.”

Smith got a big dose of dealing with adversity on a 0-10 team at A-E in 2020. The Roadrunners’ starting quarterback, sophomore Leshaud Holloway, suffered a season-ending knee injury in the first game against Webb School.

All of a sudden, Ke’on was the QB.

“Coach threw me in the fire and I had to go with it,” he recalled. “I came in (late in the first half) and that possession we scored.”

But the mood at halftime was somber after the injury.

“Even though we were down, we tried to stay up,” said Smith.

It was a young team, and Ke’on was one of only seven seniors. The roster also included 10 freshmen, 19 sophomores and 11 juniors.

“We just kept working to get better and focused on the task at hand,” said Smith. “If the game on Friday didn’t go well, we just kept practicing. We never got down on each other. We always stayed up as a team. That’s what I liked about the young ones on the team.”

Ke’on played QB up until the last two games when he was moved back to receiver.

Antonio Mays, in his first season as A-E’s head coach, said Smith was willing to do anything he asked him to do.

“Yes, it was a tough year for a lot of different reasons,” said Mays. “On the field, Ke’on was always readily available to play any position.”

“It was frustrating, but he was one of three captains on the team. So everybody always had eyes on (number) 15. I told the (Campbell) coach he’s what you want at the next level.

“Prayerfully, he’s going to do his best and we’re all going to support him and stand behind him.”

When asked about Smith’s potential on the collegiate level, Coach Mays said: “Well, he’s definitely a receiver. His best attribute is that he’s able to win the one on one ball.”

Ke’on is also a receiver who loves to block. He showed that his junior year in a big win over rival Fulton.

A-E’s Smith wants to succeed on and off the field added by design on February 14, 2021
View all posts by design →