By design on June 5, 2016Comments Off on A hidden gem in Gibbs 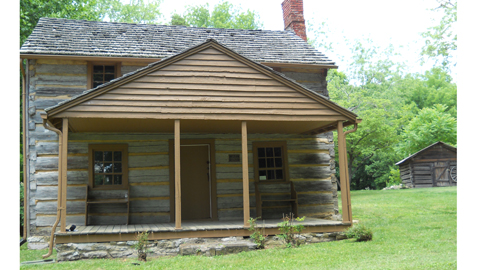 It was a backyard gathering at a place I had never been before.  I could hear the children’s laughter as they ran and played.  Folks were sitting in lawn chairs under a big shade tree.  I imagined that it was a scene much like in the day of the Nicholas Gibbs family.

Built the same year as Blount Mansion in 1793, the Nicholas Gibbs Homeplace in Knox County, Tennessee, is one of the oldest structures in the state that still stands on its original site.  Nestled in the woods, the two-story log home is barely visible from the historic marker out front.  Nicholas Gibbs, a Revolutionary War Veteran, built the home for his family.  Looking out the window from an upstairs room, I could imagine the fun his twelve children had on the grounds of the beautiful homeplace.

The annual meeting of the Nicholas Gibbs Historical Society (NGHS) is Saturday, June 11, 2016.  The house opens at 9 a.m., business meeting is at 11 a.m., and a potluck lunch is served afterwards.  Everyone is encouraged to bring their favorite dish!  The house is at 7633 East Emory Road, Corryton, Tennessee, 37721.  From Harbison’s Crossroads in Gibbs, the house is one-half mile northeast on Emory Road.  The house is on the left, and the historic marker can be seen at the driveway.  Last year, I met members of the NGHS from across the United States including California, Texas, and Greene County, Tennessee!  The Gibbs pickers and singers provided some great entertainment.

NGHS President Joe Longmire says this year’s event will reveal a huge addition to the premises.

A hidden gem in Gibbs added by design on June 5, 2016
View all posts by design →