By design on June 17, 2018Comments Off on Adams was veteran player, Valedictorian at Karns High 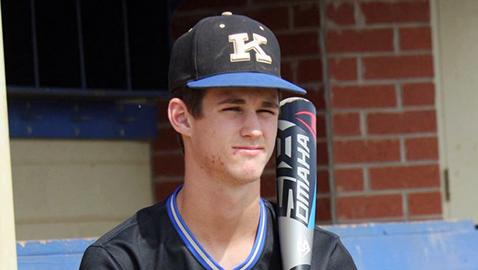 Trevor Adams was a four-year varsity starter in baseball and Valedictorian in the Class of 2018 at Karns High School.

He played in one of the most successful eras in school history as the Beavers captured three straight District 3-AAA championships and were 14-0 in district play and 30-9 overall this spring.

“Trevor is an extremely hard working young man both on and off the field,” said Coach Matt Hurley.  “He does an outstanding job of getting the most out of his teammates and himself. He’s tough, strong willed and has a desire to succeed in everything he does.”

Hurley went on to say Adams, selected Karns’ male Student-Athlete of the Year, is the epitome of a “team first” baseball player.

“Along with being an exceptional teammate, Trevor is one of the top players in the area,” added Hurley. “He looks to continue his success at the University of Tennessee.”

Adams pitched and played first base and in the outfield.

OLIVIA BAKER, Karns’ female honoree, was a two-sport standout as a senior in basketball and softball.

“Olivia was our MVP award winner and the captain of our team,” said basketball coach John Marsh. “She averaged seven points and seven rebounds per game. She played the shooting guard position, but shared time at point guard and was also our best rebounder.

“Olivia was a very good leader for an extremely young team,” added Marsh. “She leads by the example of her positive actions both on and off the court. Olivia is a high achieving student as well.”

Baker was an All-District 3-AAA player in softball as a middle infielder and shortstop and batted leadoff for the Lady Beavers.

Olivia was presented the Ultimate Teammate Award for basketball and softball by the United States Army.

She graduated with honors and has college offers in softball, but remains undecided.

Adams was veteran player, Valedictorian at Karns High added by design on June 17, 2018
View all posts by design →