By design on July 30, 2017Comments Off on Alvin Frye gave 93 years to family, community 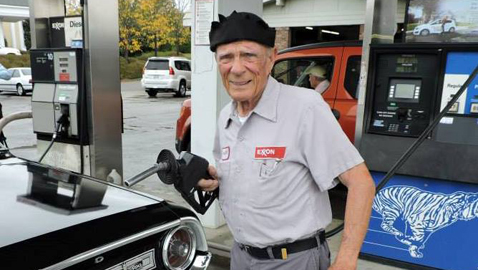 The city lost an icon, a leader and beloved senior citizen July 22 when Fountain City’s Alvin Glenn Frye passed away at 93.

Many people considered Alvin Frye the “Community Caretaker” and his hospitality at the service station and in the community was notable.

“Alvin cared about his community and his country, and always looked out for the least amongst us,” said Knox County Mayor Tim Burchett. “During World War II, he served in some of the same areas my dad did and they saw some pretty fierce combat. He was a great example of the Greatest Generation, and he’ll be missed. I’m asking folks to pray for his family and loved ones.”

“‘If you like our air, you should try our gas’ is what was printed next to the free air supply at Alvin’s Exxon. Indeed, I filled up at Alvin’s every time I could. It didn’t take long to meet him when our family moved to Fountain City in 2005. He was always kind and sincere when we would chat by the pump.  I witnessed his kindness when he allowed IOUs from people who couldn’t afford the stations services up front. Godspeed to the great man of service we all knew and loved,” said City Councilman Mark Campen, who represents Fountain City.

“Fountain City lost a true friend when it lost Alvin Frye recently. He went about doing good deeds quietly and many of them were known only to those who were helped. He was exemplary of our nation’s best, not only through his military career, but also in his general good citizenship and his action as a role model for the community. Al will be greatly missed,” J. C. (Jim) Tumblin, Fountain City Historian, told the Focus.

Frye was the caretaker of the Fountain City Lions Club building, across North Broadway from his service station, and was honored as “Fountain City Man of the Year” by the Fountain City Hall neighborhood organization. He was also known for his sign in front of the station that read “No Lottery, No Beer” and the full-service he and his employees gave to customers.

Frye’s Fountain City Exxon closed in December with a celebration at the station, featuring a second Cash Mob event sponsored by Knox County Mayor Tim Burchett, and several hundred well-wishers attended. His wife was present as Frye was in medical care. Frye’s surprise 90th birthday three years ago drew hundreds of friends and customers to the Lions Club in Fountain City.

The family received friends Wednesday from 5:30 until 8 p.m. at Mynatt Funeral Home, Fountain City Chapel with services following at 8 p.m. Internment was on Thursday at Sherwood Memorial Gardens in Alcoa.