Army bound Hunter honored to be mentioned with A-E greats

By design on June 24, 2018Comments Off on Army bound Hunter honored to be mentioned with A-E greats 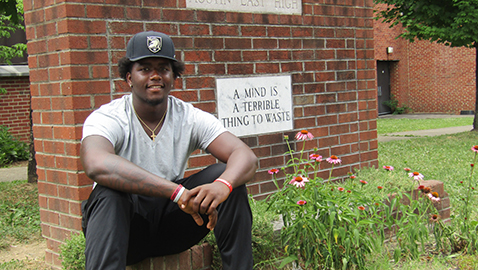 Austin-East has produced a lot of great high school football players over the years and many have gone on to enjoy success on the collegiate and professional levels.

Now, Chris Hunter has a chance. He will be leaving next month for West Point, N.Y., site of the United States Military Academy and the Army Black Knights football team.

“It’s really just a blessing to be mentioned with those type of guys,” said Hunter last week. “They were great here. My name being in the mix with those guys means I’m doing something right. It means a lot.”

Hunter, a football and basketball standout at A-E, is the school’s male Student-Athlete of the Year for 2017-18.

After contributing mostly as a linebacker as a junior, Hunter was needed at the quarterback position his senior season last fall to replace Darius Harper, who had graduated and earned a scholarship at Coastal Carolina.

Hunter also did very well in the classroom, finishing with a GPA in the 3.3 range and making a 28 on the ACT.

Army recruited Hunter as a linebacker, after evaluating his play on the defensive side of the ball his junior year.

“It’s getting real that I’m leaving, because it’s 25 more days until I leave for West Point, but it still hasn’t sunk in yet. It’s just crazy that I’m actually going to West Point.”

Hunter said he will play on Army’s prep school team the first year, which is similar to having a “red shirt” season at other colleges.

“Jazmyne has been a great young lady and student-athlete,” said Lady Roadrunner basketball coach Anthony Anderson. “I only coached her in basketball. But the one year I’ve coached her, Jazmyne has no doubt been one of my most consistent and dependable players.

“I think of Jazmyne as if I had a daughter. I would love my daughter to be like how Jazmyne carried herself on and off the court. She was very respectful and when she was on the team she worked hard, never complained and always did her best. I think this award is very deserving.”

Army bound Hunter honored to be mentioned with A-E greats added by design on June 24, 2018
View all posts by design →