By design on July 17, 2016Comments Off on Bearden 7-on-7 tourney ushers in Mozingo Era for CAK football 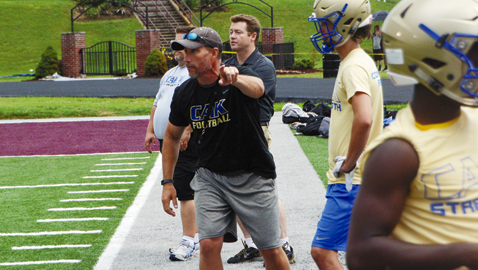 CAK, which has emerged as one of the top Class 3A football teams in East Tennessee, began playing for its new coach. Travis Mozingo is the new head coach for the Warriors. He replaces Rusty Bradley, who departed for University School of Jackson following the 2015 season.

Bradley guided the Warriors to several deep postseason runs during his tenure and won a pair of consecutive Class 3A State Championships in 2011 and 2012.

CAK’s football program is now in Mozingo’s hands and the new coach couldn’t be happier.

“We’ve had a great summer and most of that time has been spent getting to know the kids and they’ve also gotten to know me,” said Mozingo, who came from Georgia and arrived at his new school just in time to run spring practice. “This is great for us because we’re getting closer to the start of the season.

“As a coach, the closer you get to the start of the season, the more you focus on things. We’re getting closer and this is just great.”

Bradley may have left the warriors after taking them to new heights but he didn’t leave Knoxville for West Tennessee when the cupboard was bare at CAK.

And Mozingo knows this and he knows it well.

“We have some great guys,” he said.

One of those guys is senior quarterback Cole Smith. Smith became the starting field general midway through his freshman year in 2013. He emerged as one of the area’s top passers in Bradley’s potent aerial attack.

Smith endured some growing pains during his first season with the Warriors but showed flashes of brilliance. As time went on, he became one of the county’s elite quarterbacks. He’s had several 400-plus yard passing games and has thrown more than his share of touchdown passes.

The passing league tournaments serve as a call to step up preparation for the upcoming 2016 campaign, which is now approximately one month away.

The Warriors, who went 11-2 in 2015 and reached the Class 3A State quarterfinals before losing to rival Alcoa (which also defeated CAK during the regular season), will open the 2016 season at Livingston Academy on Friday, Aug. 19.

Bearden 7-on-7 tourney ushers in Mozingo Era for CAK football added by design on July 17, 2016
View all posts by design →