By design on November 29, 2020Comments Off on Beep! Beep! Baby Roadrunners make the most noise 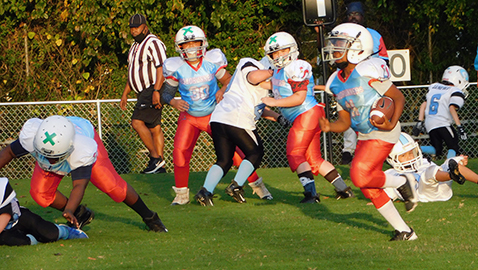 It was the year of the Roadrunner in the Knox Metro Youth Football League.

Out of the eight title games, the Baby Roadrunners won four championships and were runners-up in another one.

“We had a tremendous year,” said Melvin Tate, who is a member of the Board of Directors for the Baby Roadrunners’ organization.

After being the football commissioner for 40 years, Tate recommended Mark Andrews for that position this season and he was approved by the Board.

Tate also pointed out the Baby Roadrunner program increased from “60 kids to 180” this season.

“With the pandemic, we were lucky that no kids got sick,” added Tate. “We sterilized their equipment every time at their games.

“In December, we’re going to give each team a banquet, but we can’t treat them all in one day because that’s over the (protocol) limit. We’ll do it over two days one weekend in December.”

Red and Blue colors fill the air for 7U finals

A smoke bomb was set off, producing the Red and Blue Roadrunner colors, as their 7U team took the field at John Tarleton Park on Tuesday night, Nov. 10.

After the game, Andrews said he had been most impressed this season by his players’ willingness to learn. “For a lot of them, it’s their first year in pads.”

Despite their youth, Andrews said they had the “discipline” to understand the “high school terminology” he used in his play-calling.

An example of that was one of Coach Andrews’ favorite plays: “Pistol right, motion, 48 jet.”

Andrews has been a head coach for 14 years and this was his third season with this group of players.

The unbeaten 7U team was unscored on and gave up only two first downs all season. It averaged 27 points per game in KMYFL play.

Jayzon Thompson put his versatility on display as he led the 12U Baby Roadrunners to a 20-6 win over the Mechanicsville Community Association’s Goon Squad.

The Gresham Middle School 12-year-old ran for a touchdown, caught a TD pass and returned an interception to paydirt as time expired.

Just “play hard” was the key to the win, said Jayzon after the game. Winning the championship was a “great” feeling, he added.

The Baby Roadrunners led only 7-6 at halftime but increased their lead to 14-6 in the third quarter.

Kaylin Chesney intercepted a long pass by MCA at mid-field with 6:46 remaining in the final quarter and the Baby Roadrunners kept the ball until turning it over on downs with 42.8 seconds to go.

It was the third meeting of the season for the two teams. MCA won 13-12 in a season opening bowl game at A-E, said Roadrunner Coach Kaylin Chesney. In regular season league play, the Baby Roadrunners prevailed 27-6.

9U team also wins title in Battle in Rocky Top

Head Coach Charlie McCaleb’s 9U Baby Roadrunners rolled past Farragut 31-7 for their KMYFL title and went on to win the championship in the recent Battle in Rocky Top tournament – a first-time accomplishment for the Baby Roadrunner program.

David Gaston said  brighter days could be ahead for Austin-East High’s football program after his 11U Baby Roadrunners walloped the Falcons 39-6 for their title.

“If these kids can stick together, they can get back to where they were at (in the past at A-E),” said Gaston, who was a running back at Central High in 2005.

“The (Austin-East) community is starting to rally again, and there’s excitement with the youth teams and how they are winning again.”

Antonio Mays, Austin-East High School’s first-year head coach, was in attendance during the KMYFL finals. His Roadrunners finished 0-10 this season.

Gaston’s team this season was undefeated and their “closest” game was 15-0 (in its semifinal win over CCYSP). They were unscored on in their six regular season games and the Falcons’ touchdown in the finals was the only points they allowed in KMYFL play all season.

Beep! Beep! Baby Roadrunners make the most noise added by design on November 29, 2020
View all posts by design →