Berean Christian has a ‘blast’ in first swing at tennis

By design on March 28, 2021Comments Off on Berean Christian has a ‘blast’ in first swing at tennis 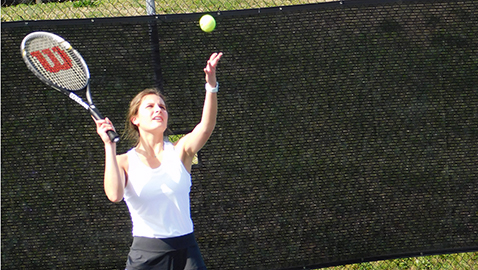 Berean Christian School didn’t come out on top in the team scoring, but it had a historical day to remember in athletics.

Concord Christian won the boys’ match 7-2 and the girls’ match 5-4. The Berean girls had to forfeit in No. 6 singles and No. 3 doubles due to having only five players.

Olivia Blaylock said being Berean’s first coach in tennis “means the world” to her.

“Coach (Eric) Palmer, the athletic director, and I got together at the beginning of the year and decided we would make this become a reality,” said Blaylock. “We’ve had students interested in tennis and wanted to make sure we gave them the opportunity and the space to get out here and try something new.

“I’m very impressed just to see how far they’ve come. For nearly all of my players – every single one of my girls and all but two of my boys – this is their first experience in any kind of tennis match.”

Blaylock, who played tennis at Jefferson High School in Georgia and at Johnson University, was thrilled to see her girls record individual wins, considering “they’ve never picked up a racquet before a month ago,” she said. “So, just to see them come out here and have fun and try something new is very exciting.”

It was remarkable how many of the Berean players improved during the course of their first matches.

The girls’ No. 1 doubles match was a prime example of that improvement for both teams. Perhaps it was because of how that duel went right down to the wire.

Berean lost the 7-5 tie-breaker, but it took both teams to make it the match of the day.

“The girls in No. 1 doubles fought super hard and it came down to a very close tie-breaker and I’m very impressed that they fought to the last point,” said Blaylock. “They came out here with a very close match and just did their best.”

Jim Webster, in his first season as Concord Christian’s high school coach after several seasons coaching the CCS middle school teams, also was impressed with the play in the No. 1 girls’ doubles match.

“That was just a great match overall,” he said. “Lots of shots back and forth and lots of rallies. It was fun to watch. It was good tennis.”

In the end, Concord Christian junior Grace Davis, displaying a strong backhand stroke, brought the Lady Lions from behind when she won a net point followed by the match point.

“I can’t say enough about Grace,” said Coach Webster. “She played with me in middle school and I’m happy to have her. You know, if you’re across from Grace, you better get ready. She’s just a good player and a super person overall.”

In No. 1 singles, Grace Davis defeated Edington 6-0. Robertson won over Eckles 6-1 in No. 2 singles.

Dyer defeated Moore 6-1 in No. 3 singles and Mink won over Emily Rainwater of CCS 6-1 in No. 4 singles. In another tie-breaker, Concord’s Mackenzie Davis defeated Faith Porter of Berean 7-5 in No. 5 singles.

In boys’ play, Berean picked up its two wins as Jonah Brooks edged Elijah Hawkins 6-4 in No. 4 singles and Leighton Long posted a 6-2 win over Isaac (Ike) Reyes in No. 6 singles.

All of the other matches went to Concord Christian, but three were very close. Lincoln Shine nipped Michael Belew in a 7-5 tie-breaker in No. 1 singles. Nick Shine slipped past Ty Cox 6-4 in No. 2 singles. Asa Church prevailed 6-2 over Peyton Bateman in No. 3 singles. Isaac Hood won a 7-5 tie-breaker over Parker Goodwin in No. 5 singles.

In boys’ No. 1 doubles, Lincoln Shine and Maddux Atkins teamed up for a 6-2 win over Belew and Cox. Concord’s Church and Braydon Moats shut out Bateman and Brooks 6-0 in No. 2 doubles. CCS’s Hawkins and River Shannon also rolled to a 6-0 win over Berean’s Parker Goodwin and Devon Paxson in the No. 3 doubles.

After the history-making debut, Coach Blaylock said the generic reaction she got from the team as a whole was: “Each of the players had a blast! Once their nerves calmed down, they felt like they were able to use their new skills and apply them. They were proud of their achievements and look forward to what is to come.”

The match with CCS was Berean’s only home match this season. The Eagles are scheduled to play their next match at Maryville Christian School on April 8 at 4:30.

Concord Christian is slated to play at Grace Christian today (March 29) at 4. Coach Webster has a full boys and girls team, with 10 boys and seven girls. “We’re growing,” he said. “It’s good.”

Berean Christian has a ‘blast’ in first swing at tennis added by design on March 28, 2021
View all posts by design →