By design on April 25, 2021Comments Off on Berean Christian nets first victory in tennis 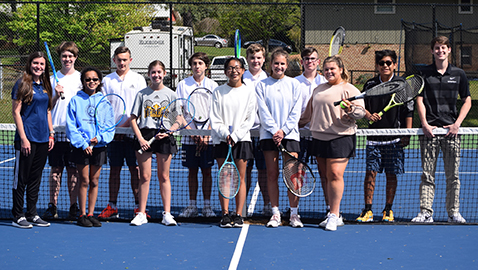 After last year’s cancellation due to COVID-19, Rutherford County will once again host Spring Fling in 2021.

Spring Fling is the TSSAA’s unique spring sports championship event, where state championships are decided in seven different sports over a four-day period.

Spring Fling will be held from Tuesday, May 25 through Friday, May 28. Track and field and baseball events which have normally been held on the campus of MTSU will be moved to new sites this year due to the university’s capacity limits.

The Track & Field State Championships will be held at Rockvale High School and baseball championship games will be played at high school sites that are currently scheduled to host quarterfinal and semifinal rounds.

Knoxville Catholic is hoping to announce a new head football coach this week.

“We do not have a coach yet,” said Catholic Athletic Director Jason Surlas last week. “We are interviewing candidates and hope to have an announcement no later than (this) week.”

Surlas added the school had not named an interim coach and doesn’t intend to.

As far as spring football practice for the Fighting Irish, Surlas said: “Our hope is we have a coach (this) week and he will decide when to hold spring practice. If for some reason we do not have our guy (this) week, it is possible we hold spring practice with our assistant coaches splitting up duties.” Knoxville Catholic suspended its football coach, Steve Matthews, after Knoxville police arrested him on drunken driving and drug charges late at night on April 1.

Matthews resigned as Catholic’s coach, the school announced in a news release April 5.

“We are grateful for the years of service that Steve has given Knoxville Catholic High School,” school president Dickie Sompayrac said in a statement announcing the resignation. “He’s a championship caliber coach and we regret that his tenure at KCHS has ended this way. We respect Steve’s decision and we will pray for him and his family as he moves ahead.”

Preps of the past

Fifteen years ago, on April 26, 2006: Bearden’s boys clinched the District 4-AAA regular-season tennis title with a 5-1 victory over Farragut, while Farragut’s girls moved a win closer to the district crown with a 4-0 victory over Bearden at Tyson Park.

Bearden got singles wins from freshman Taylor Patrick, Chris Aker and Ben Rahnema, and also from Hunter Maltsberger, who plays No. 1 singles and No. 1 doubles with Patrick.

The Lady Admirals won all three doubles matches and Sarah Godfrey prevailed at No. 3 in the only singles match completed before a thunderstorm cancelled remaining play.

Bearden, which was behind on two courts, conceded the loss.