Blosser shares her love of sports as volunteer at Special Olympics

By design on April 15, 2018Comments Off on Blosser shares her love of sports as volunteer at Special Olympics 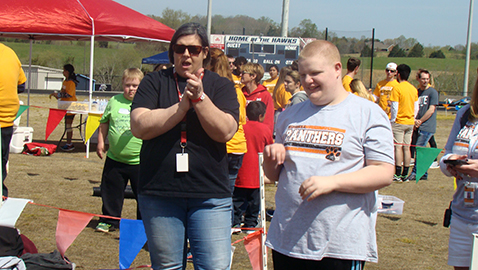 As a softball player at Hardin Valley Academy, Jayden Blosser has competed on the state’s biggest stage.

Blosser, a senior catcher for the Lady Hawks, has played in the Class AAA State Tournament as a freshman. She’s also been a part of two district and region championship teams.

But on Wednesday morning, she took her love of athletics to a higher level. She was one of several Hardin Valley students or student-athletes who undertook the enormous task of organizing the annual Special Olympics Track and Field Meet that the school hosted at its track.

The event was rescheduled for Wednesday after being washed out by morning showers on Monday, April 9.

Blosser said that she and the other peer tutors began planning for the event at the beginning of the 2017-18 school year. Part of her duties Wednesday included awarding of medals.

“This is fun,” Blosser said. “It’s been a little chaotic but it’s been a lot of fun.

Special Olympics, which began in 1968, is celebrating its 50th anniversary and that was the theme for the banners that lined the track during the opening ceremonies on a cool and breezy morning that quickly morphed into a beautiful windy spring day.

Long has had a memorable 2017-18 academic year in athletics. Long was a 3-point shooter for Gresham Middle School’s boys basketball team. He made a pair of 3-point shots in an early-season game against Halls Middle School and students and fans from both schools stormed the court at Central High School back in November.

The Gladiators also won the James A. Ivey Jr. Memorial Middle School Basketball Tournament at Karns in February. The Gladiators edged Farragut in the title game as the No. 9 seed.

Blosser shares her love of sports as volunteer at Special Olympics added by design on April 15, 2018
View all posts by design →