By design on April 9, 2017Comments Off on Bradley unpacking his ‘Spread Coast’ offense at GCA 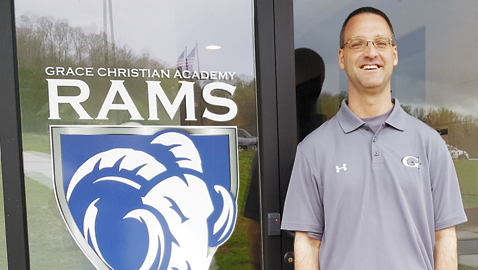 Rusty Bradley may have a little extra motivation in the back of his mind when he coaches his first football game for Grace Christian Academy come Aug. 18.

Bradley’s Rams will be taking on two-time Class 3A defending state champion Alcoa that night, but that’s only part of the story.

The last time Bradley faced Alcoa turned out to be his last game at Christian Academy of Knoxville. That state quarterfinal game in 2015 went to Alcoa by a score of 24-0.

It marked the only time a Bradley-coached team had been shut out in his nine seasons at CAK.

An entire season has come and gone since then, but it’s very doubtful Bradley has forgotten the final score against Alcoa that night.

Offensive football is what the new GCA head coach has built his reputation upon. Even going into that playoff game at Alcoa in 2015, his Warriors were averaging 37.2 points per outing.

After his Tornadoes blanked CAK, Coach Gary Rankin said, “Those guys have not been shut out forever. That’s pretty big. When you shut them out, you’re playing some mighty good defense.”

In 2012, when Bradley guided CAK to its second straight Class 3A state championship, the Warriors averaged 45.7 points per game.

Bradley, of course, took his offense with him to University School of Jackson in 2016 and he’ll have it on display at Grace Christian this season.

“The offensive system will stay intact for sure,” said Bradley last Thursday, completing his first week on the job at GCA. “It will be the same.

“It’s a West Coast offense with spread formations, so I gave it the name Spread Coast,” laughed Rusty. “I got creative (with the naming of it).”

Grace Christian fans, no doubt, are already looking forward to it.

Rusty, who turns 43 this Thursday (April 13), was a walk-on receiver for one season at UT before going to Georgetown College (Ky.) to finish his college career.

After coaching as a graduate assistant at Tennessee Tech, Louisiana Tech, Colorado and Indiana, he was an assistant at CAK for four seasons before becoming head coach in 2007.

Rusty’s dad, Mark Bradley, was an assistant coach for Tennessee before joining his son at CAK in 2005. He’s been coaching with him ever since.

He succeeds Randy McKamey, who resigned in December to take the head job at Clinton High, he and his wife’s alma mater. McKamey was 89-32 in his 10 seasons at GCA and had the Rams in state title contention in Division I, Class 2A.

“I’m just excited to be here,” said Bradley. “The people have been awesome. It’s been a whirlwind this past week … I’ve jumped in with both feet. It’s been hectic, but it’s been easy.”

The Rams will be playing their first season in Division II-A (private schools that can offer its athletes financial aid).

Having coached the one season at University School of Jackson, Bradley believes that gives him an advantage as GCA heads into the new classification.

GCA’s spring football practice will be April 24 through May 11. Bradley said the Rams would not have a scrimmage or an intra-squad game.

“We’ll be teaching and installing,” he added. “I don’t think we would be ready for one anyway. We’re just going to have 10 days of practice.”

Bradley, who is single, said he really doesn’t have a hobby outside of football.

“Honestly, no. I like to run – that’s really about it,” he said. “Football is my hobby. I’m allowed to get paid to do it. I love all of the things involved with football.”

In announcing Bradley as the new coach, Grace Christian head of school Rob Hammond tweeted a statement: “I am confident that he will exceed my expectations in furthering a positive, Christ-centered culture in our football program. His desire for excellence and his coaching experience in TSSAA Division II football will be great assets during this transition.”

Bradley unpacking his ‘Spread Coast’ offense at GCA added by design on April 9, 2017
View all posts by design →