By design on September 27, 2020Comments Off on CAK freshman wins title in first district tourney 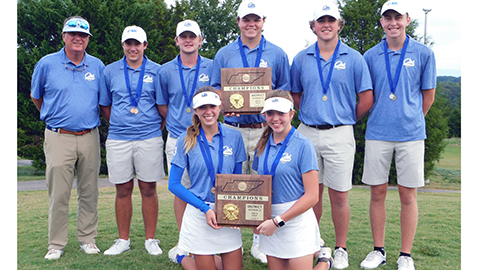 Taylor shot an 84, but her nerves were tested after she scored a 39 on her first nine holes at Three Ridges.

The girls started their play on the course’s back nine (holes 10 through 18).

Looking back on her round, Taylor said “definitely perseverance” was the key to her win, “because there were some holes out here that really got me.”

Malerie lost four strokes to par on hole No. 1 and saw her score increase from three over par to seven over.

“That was real discouraging,” said Taylor, who felt she might have lost the tournament at that point.

Just before the quadruple-bogey, she said Coach (Donnie) Cooper had told her she ‘should be in the No. 1 position.’

Taylor responded like a champion after her worst hole of the day by making three straight pars.

Malerie, now 14 years old, said she has been playing golf since she was “six or seven” and winning her first district tourney was “definitely a boost of confidence.”

McKinney also is a freshman and plays for The King’s Academy.

“I’ve known her since we were nine,” said Malerie. “I’m comfortable playing with her.”

Taylor recalled McKinney’s pep talk too after the quadruple-bogey.

“Positivity is definitely one of my main things in golf,” added Taylor. “I can’t stay on negativity.”

Taylor combined with Allie Cooper (95) to give CAK the girls’ team title with a 179 score.

Bear Trace at Harrison Bay in Chattanooga will be the site of the Class A East Region on Oct. 6.