By design on November 3, 2019Comments Off on CAK holds off Webb’s fourth-quarter rally, prevails 24-14 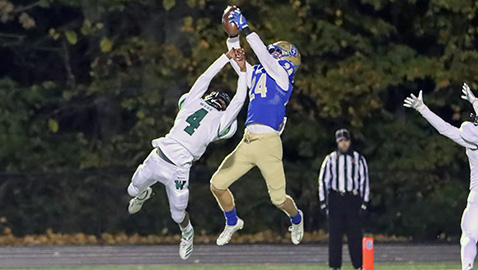 For three quarters Friday night, Christian Academy of Knoxville outplayed visiting Webb School of Knoxville, and it appeared the Warriors would cruise to a comfortable win. On the first play of the fourth quarter, kicker Zander Tonkin’s 43-yard field goal gave CAK a seemingly safe 17-0 lead.

The Warriors then drove 80 yards on seven plays, and clinched the 24-14 win with 2:03 left when quarterback Ryan Degges hit Caleb Sparkman for a 16-yard touchdown. Even then, Webb drove to the CAK three, before a final, fourth-down rush was stopped.

“When you’re playing Coach Meske’s team, you know it will not be over until the scoreboard says zeros and it’s the fourth quarter,” Mozingo said. “They don’t quit. He’s been doing it a long time; he knows where he’s gonna hit you. He know where he’s gonna have a chance to slip one on you. He gave us everything we wanted, for sure.”

“In the second half we got ourselves in a position where we could possibly win the football game,” said Meske. “We just didn’t make plays when we had to make plays there at the end.”

CAK took a 7-0 lead with 3:34 left in the first quarter when running back Jarvis Stockton plowed in from the two. Quarterback Ryan Degges was two for two for 57 yards on the drive. For the game, Degges was 20 of 27 for 276 yards and two scores. Stockton ran for 73 yards on 19 carries, most in the second half.

After a Webb three-and-out, the Warriors took over on their 32 late in the first. Seven plays later, Degges hit Grant Sterchi with a bullet over the middle for a 21-yard touchdown. The 14-0 lead held to halftime.

After the field goal, Webb – which for three quarters had a mere 109 yards of offense – suddenly found its rhythm. A 65-yard kickoff return put the Spartans in business at the CAK 30. On the first play, quarterback Joseph Moore hit Luc Nadaud wide open over the middle for the touchdown.

“Yeah, they had the good return, a short field,” said Mozingo. “We had the fumble here, a turnover; that’s something we haven’t done a lot this year. That was kind of an adjustment for our guys. And they take a shot right after the turnover. That’s what smart coaches are gonna do.”

When the Warriors shanked a punt on the ensuing drive, Webb took over on their 46. Five plays later Moore again connected with Nadaud, this time for 34 yards and a 17-14 game. Moore threw an unusually high 27 times, completing 15 for 224 yards and two scores.

One of those big plays was an 18-yard completion on third and five from their own 25 that kept the Warriors’ final scoring drive alive. Four plays later, Degges connected with Sparkman to make it 24-14.

“Proud of our guys,” Mozingo said. “They battled; the defense was stout when they needed to be. Offense was good enough to win the game. That’s what you gotta do.”

CAK will have a rematch against Chattanooga Christian on the road Friday night in the first round of the playoffs. The Warriors lost 14-3 to the Chargers on Sept. 27. Mozingo welcomes the chance at round 2.

“Our kids are actually eager for that,” he said. “We felt like we had some opportunities (the first time). Our boys wanna right some wrongs in that one. Chattanooga Christian is a familiar team. But they know us as well. So it’ll come down to some coaching I imagine.” Webb will travel to Nashville to play Christ Presbyterian Academy.