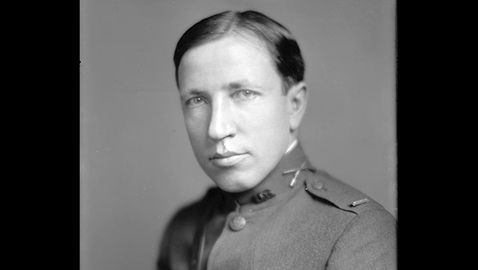 Sam R. Sells, the congressman from Tennessee’s First Congressional District, was a successful, forty-nine year-old businessman when he faced a challenge inside the Republican primary from Carroll Reece.  Reece was not quite thirty-one years old, well- educated and a highly decorated veteran of the World War.  Sells, a cigar-smoking, bushy-headed veteran of ten years in Congress had met with Reece and tried to discourage him from running.  At the beginning of the campaign, Congressman Sells and his friends throughout the district had not taken Reece’s candidacy seriously.  That proved to be a mistake and as the summer progressed, it was all too clear Carroll Reece was making headway in the GOP primary.

George C. Taylor of Greeneville, had been the secretary to the last Republican governor of Tennessee, Ben W. Hooper.  A member of the Tennessee Republican State Executive Committee, Taylor was interviewed by a reporter from the Nashville Banner while he was visiting the State Capitol.  According to Taylor, Reece was “making an effective campaign for congress” inside the First District.  Taylor became manager of Reece’s congressional race and by early July was declaring he was “absolutely confident” Reece would win the Republican nomination over Congressman Sells.  Taylor said seven newspapers in the district were supporting Reece and the candidate could barely keep ahead of the requests in the district for speaking dates.  Taylor noted, “In the upper end of the district where Congressman Sells has always gotten his large majorities, Lieut. Reece has made great gains and it is now conceded that he will carry Johnson county, his home county, which Sells carried by seven hundred two years ago…”  George Taylor thought the race between Reece and Sells would be “very close” in Sullivan and Washington counties while pointing out, “Congressman Sells has never been able to carry the lower end of the district and the opposition in Hancock, Claiborne and Grainger is more pronounced than ever before.”  “In Sevier county there is a veritable political revolution on and conservative politicians are claiming Reece will carry this county by at least 1,000 votes.”  Taylor concluded the interview with a reporter for the Knoxville Journal and Tribune, “We feel confident that Lieut. Reece will repeat Congressman Will Taylor’s performance of two years ago by carrying practically every county in the district.”

Congressman Sam R. Sells was evidently feeling some momentum for Reece when he issued a blast through the newspapers in the First District complaining he had been “vigorously and viciously attacked” by his opponent.  Sells mentioned three individuals supporting Reece, referring to the trio as Carroll Reece’s “political sponsors” and sniffed, “With this crowd fighting me, it has appeared to me that no active campaign on my part is necessary.”  Sells denied he had summoned Reece to his office and vehemently claimed he had never been “rudely discourteous” to the prospective candidate.  Sells further denied he had “boasted of my organization and wealth, both of which I proposed to employ against him should he become a candidate.”  The congressman also said he had never stated “that when I got ready to quit I would name my successor.”  Sells said he had not known Reece was in Johnson City so to presume he had summoned the young man to his office was impossible.  “But there is just as much truth in this as in the remainder of his statement,” Sells growled, “every word of which I emphatically deny.”  Sells provided a copy of a sworn statement signed by “the gentleman who brought Reece” to his office.

Sells snorted, “It took a week for Reece to discover that he had been insulted, it is a rather poor tribute to his mental attainments which have become the proud boast of the Bluff City Developer and the Carter County Banner, published by my arch enemy, Sam H. Thompson.”  According to Sam R. Sells, not only had Reece not been insulted, “but treated with the utmost courtesy and respect.  I listen patiently to all that he had to say, found no fault with his aspirations to go to Congress, expressed regret that he was to be my opponent, and permitted him to close the interview at his pleasure.”  For the “fair minded” folks in the First District, Congressman Sells believed his denial, as well as the signed statement by J. W. Shoun should be “sufficient contradiction” to the claims being made by Carroll Reece.  Sells insisted it was quite reasonable to believe “that Mr. Reece had opportunities for communion with my enemies” before determining he had been “insulted.”

Assessing the congressional race during the first week of July, the Greeneville Daily Sun noted Carroll Reece had “been making a very active campaign, speaking in all of the counties.”  Congressman Sells had “contented himself with visiting practically all of the counties” since returning from the Republican National Convention in Chicago.  Sells still had to begin a speaking campaign inside the First District, although the Daily Sun expected the congressman to open in Reece’s home of Johnson City.  Supporters of the congressman “express no fear” about the outcome of the primary election “and believe his majority over Lieut. Reece will be the largest he has received in any of his races heretofore.”

As the supporters of Sam R. Sells were declaring their confidence about the election, Carroll Reece was busy campaigning in Mountain City where  the Bristol Herald Courier reported he “was given one of the largest and most enthusiastic receptions” any candidate for Congress had witnessed since “Robert L. Taylor and A. H. Pettibone.”  A “processional” was formed in front of the courthouse composed of “automobiles and horses”, headed by the Mountain City Band.  Carroll Reece and his party were met one mile north of the courthouse and escorted into town by supporters.  The arrival of the candidate was the signal to begin a parade and everyone marched to “the grounds of the City High School where a platform had been erected”, cheerfully festooned with American flags.

Veterans of the World War were a staple of any Reece campaign event and the rally in Mountain City was no exception.  Bert Wills, a veteran, was Reece’s campaign manager for Johnson City, presided.  W. S. Wilson, a former classmate of Reece, was the first of several speakers, including Mayor E. E. Butler.  Reece spoke for “more than an hour” and held the attention of his audience without uttering a criticism of his opponent.  Dr. J. B. Shoun was called to the platform where he “delivered an address in behalf of the soldier boy.”  Finally, Lieutenant John T. Fuller closed out the program after having spoken for another thirty minutes.

Stopping in Knoxville on his way to Sevierville, Carroll Reece told a reporter for the Knoxville Sentinel, “One of my prime objects in running for congress in the first district is to free the party from bossism.”  Reece also gave an interview to a reporter with the Knoxville Journal and Tribune, which had given his campaign favorable coverage.  “I think that the people think that Sells, having been in office for the last ten years, has had it long enough, and that those things should be passed around,” Reece said.  It was a statement which would come back to haunt him politically.

Reece said he believed a congressman should devote full-time to working on behalf of the people he represented.  A representative’s time “should be divided three ways,” Reece said.  “He ought to be present to vote on the legislation which comes before congress, he should spend much time in study so that he might be prepared not only to vote intelligently but to frame legislation,” Reece explained, “and he should make himself acquainted with the people of his district, so that he may become acquainted with their needs and desires.”

“One of the greatest troubles with legislation in the past has been that the drafting of it was left in the hands of too few people,” Reece said.  The candidate went on to criticize Congressman Sells, whom he claimed “has been absent and failed to vote on 500 different measures” and then proceeded to tick off a list of bills Sells had failed to support or oppose, saying, “notably the bill providing for the direct election of senators by the people, the federal reserve act; the war insurance act; the measure for the vocational rehabilitation of cripples in industry; bills appropriating money for the prosecution of trusts; the conference report on the Clayton anti-trust act; the deficiency bill and others.”

Reece thought “an explanation is due the people” by Sells for his vote against the income tax “and the measure for a tax on excess profits of corporations, which would have provided a tax on corporations and businesses, most of them in the north and east, in proportion to the benefits they received from the government” which Reece pointed out would be a help in “relieving the burden on the shoulders of the common people.”

The Knoxville Journal and Tribune covered Reece’s first campaign rally in “the staid old town of Greeneville”, a place of “culture and refinement” which had been home to Andrew Johnson, “the great commoner.”   The reporter wrote people came from all over the district to hear Reece speak in Greeneville.  There were apparently eight “carloads from Cocke county” and “two or more from Carter County” and perhaps as many from Johnson County.  The Journal and Tribune reporter thought Carroll Reece was “growing and improving as he goes through the district.”

Sam R. Sells seemed somewhat overconfident as the GOP primary loomed in August.  The congressman did not start speaking throughout the district until July 18, opening with a speech in Elizabethton.  Evidently, the congressman’s political strategy was to conduct “a whirlwind tour” of the district during the last three weeks of the campaign.

The Greeneville Daily Sun published an article summing up the congressional contest as Reece supporters would have voters believe Sam R. Sells “was the meanest man who ever lived” while the young candidate was “the grandest mortal that has trodden this mundane sphere since the days of the Messiah.”  The Daily Sun noted the press releases issued by the Reece campaign would have one believe the candidate “is received wherever he goes with more pomp and splendor than was a Roman conqueror on his triumphal entry into the imperial city.”  The Daily Sun conjured an amusing image in the minds of its readers.  “Bouquets are flung, the people cheer, the bells toll and the dogs howl” with the arrival of Carroll Reece.  “His audiences are the largest assembled; the gentlemen who introduce him soar into the mystic realm of oratorical sublimity; Reece comes upon the rostrum under the magic spell of a mighty ovation.  He delves into the unfathomed regions of political science, unravels mysteries that no other mind has been able to grasp and takes the charm out of Mark Anthony’s oration at the tomb of Caesar.  Enthusiasm runs rampant in the hearts of his listeners, applause rings out like thunders from Mount Olympus and Reece supporters became so numerous they cannot be counted.”