By design on April 4, 2021Comments Off on Carroll Reece: Tennessee’s ‘Mr. Republican’ Pt6 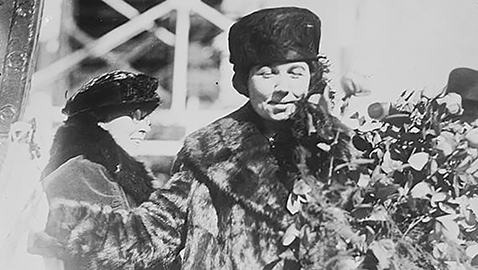 Carroll Reece had first been elected to Congress to represent Tennessee’s First District in 1920 when he had defeated incumbent congressman Sam R. Sells in the Republican primary. 1920 had been a banner year for Republicans in Tennessee with the GOP winning the governorship, electing a member of the state Railroad and Utilities Commission, and five members of Congress. The pendulum swung back to the Democrats in 1922 when Austin Peay had defeated Governor Alf Taylor, and the Republicans lost three congressional seats to the Democrats. Carroll Reece had swept aside his opposition in both the primary and general elections to win reelection easily. In 1923, the thirty-three year-old congressman had married twenty-five year-old Louise Despard Goff in what several newspapers of the time referred to as a “brilliant” social occasion in the Nation’s Capitol.

Frank P. Robinson, a resident of Sevier County, had run a lackluster last place finish in the Republican primary in 1922 and undeterred, promptly announced he was running again in 1924. Reece faced another opponent, W. I. Jones, who seemed to represent a more serious challenge. Jones was born in Claiborne County in very modest circumstances. At various times, “Billy” Jones had worked very demanding physical jobs as both a boy and young man to provide for himself, as well as to pay for his education. Graduating from Lincoln Memorial University, Jones had been “an editor, soldier, traveler and teacher.”

The congressman opened a political headquarters in the Unaka and City National Bank Building in Johnson City. Reece gave an interview to a reporter from the Johnson City Chronicle and lamented he had hoped he wouldn’t face opposition for renomination in the Republican primary after unanimously winning the endorsement of the GOP congressional convention. Reece told the reporter, “Anyway, it has not been my fortune to get many of the good things in life without a fight.” The congressman said the initial reports from the various counties comprising the First Congressional District indicated he was in good shape to win the Republican primary.

According to the Nashville Tennessean, Congressman Reece was renominated in the Republican primary by a majority of approximately 4,500 votes. Democrat R. M. Barry, Chairman of the Unicoi County Commission and a bank president, challenged the congressman in the general election. Barry scored Reece for having supposedly nominated a young man who was not a resident of the State of Tennessee to one of the military academies, but the congressman won the general election easily. As John W. Davis, the Democratic presidential nominee carried the Volunteer State over Republican Calvin Coolidge, Carroll Reece was winning the First Congressional District with almost 63% of the vote against R. M. Barry and two Independent candidates.

Congressman Reece continued to accrue seniority, a valuable commodity in Congress, and served on the House Military Affairs Committee. Reece campaigned for a fourth term in the House of Representatives in 1926 and yet again faced opposition inside the Republican primary. Reece faced Oscar Byrd Lovette, the District Attorney General of an area of counties surrounding Greene County, and Joel N. Pierce. Joel Pierce was the superintendent of the Greene County school system.

Reece shrewdly used his incumbency to his advantage as the primary election approached. A copy of a letter sent by Reece to the veterans living inside the First Congressional District addressed to “Dear Buddy” and signed by “Your Comrade” was published as a political advertisement in newspapers throughout the area. Reece announced the House had passed a bill benefitting veterans by “reinstating government insurance to 1927.” For those interested, Reece promised to send along a copy of the bill if they wished. The congressman also said, “I have assisted in getting the House of Representatives this bill as well as other laws for the relief of the ex-service men.” Reece wrote his political opponents were making “many false statement about what I have done for the ex-service men” which was an attempt to “prejudice my comrades in arms against me and advance the political interests of a non-service man.” Reece reminded veterans few others in Congress had done as much for them and the “widows, orphans and dependent mothers and fathers” as he had in such a relatively short period of time. “Just as I stood shoulder to shoulder with my comrades on the firing line in France so have I stood for your interests in Congress and no man can truthfully deny it,” Reece wrote.

Congressman Reece noted Joel N. Pierce had not fought in the World War, nor any other war. The bookish school superintendent had tried to “deride me for receiving decorations for deeds performed in line of duty on the field of battle where so many of my comrades were left sleeping never to awake,” Reece’s letter said. Reece related Pierce had boasted he had been exempted from service during the war and not for any physical disability. “You could have probably been ‘exempted’ from the draft if you had tried,” Reece wrote veterans, “but that is not the kind of red American blood that flows in your veins.” It was an effective letter.

After the polls closed on Election Night and the vote returns began to trickle in, it was readily apparent Carroll Reece had once again won the GOP primary. According to the Johnson City Staff-News, even the most optimistic of Reece’s supporters seemed surprised by the congressman’s margin of victory. Pierce had carried his native county of Greene, but O. B. Lovette was also from Greene County. Pierce had only won by around 500 votes out of 3,500 cast. Pierce also carried Unicoi county while the remaining ten counties comprising Tennessee’s First Congressional District were carried by Congressman Carroll Reece.

Reece won his greatest general election victory that year, winning more than 88% of the vote against Democratic nominee W. I. Giles.

May 18, 1928 brought the announcement of the birth of Carroll and Louise Reece’s only child, daughter Louise Goff. Young Louise had been born in Washington’s Garfield Hospital. “Handsome announcements” were received by the Watauga Chapter of the United States Daughters of 1812 and the Julius Dugger Chapter of the Daughters of the American Revolution announcing the birth of Miss Louise Reece; Mrs. Reece was a member of both historical organizations. The daughter of a congressman and granddaughter of U. S. Senator Guy D. Goff of West Virginia, baby Louise and mother received a beautiful bouquet of flowers from President Calvin Coolidge and First Lady Grace Coolidge. Mother and daughter returned to the Reece apartment from the hospital on May 30.

That year Reece’s father-in-law, Senator Goff, won the West Virginia GOP primary for the Republican presidential nomination as the favorite son of his home state. Congressman Reece was enthusiastically supporting Secretary of Commerce Herbert Hoover for the GOP nomination. Congressman Carroll Reece, after having served eight years in Congress, seemed to be well entrenched inside his own district. For the first time, Reece was unopposed in the Republican primary in 1928.

The nomination of Herbert Hoover delighted Congressman Reece and the Tennessean was supposedly one of “the first in the South to espouse the” Hoover candidacy. J. Will Taylor, congressman from Tennessee’s Second District and the Republican National Committeeman from the Volunteer State, conferred with Secretary Hoover in Washington. Taylor told the GOP nominee he had a better than even chance of carrying Tennessee, Kentucky, Florida and Alabama. Hoover asked Carroll Reece to meet with him where he thanked the congressman warmly for the support he had received from the First District.

With Republican prospects bright for the fall, Tennessee Republicans promptly began bickering amongst themselves. Raleigh Hopkins, the GOP nominee for governor of Tennessee, was arguing a contest before the Republican State Executive Committee when he and John Jackson, the former postmaster of Columbia, Tennessee, got into a brawl, resulting in the candidate being stabbed. Not seriously injured, Hopkins recuperated at home while Jackson was free on $250 bond for assault with a knife. Knoxville’s Hal Clements, a colorful figure whom I knew at the end of his life, railed against the “bossism” imposed upon Tennessee’s Republican Party by Congressman J. Will Taylor. Clements cried that “common folks” should be admitted into the party’s councils, not merely the federal appointees who had benefitted from the patronage of “Hillbilly Bill” Taylor.

Lem Reece, best man at his brother’s wedding in 1923, was himself an ardent Republican and had been named as the manager of the Republican ticket’s campaign inside Carroll Reece’s First Congressional District. It was a coup for both Reece brothers when presidential candidate Herbert Hoover announced he would make a speech in Elizabethton, Tennessee in Congressman Reece’s district. According to columnist Kirke L. Simpson, Washington’s press corps had been astounded by Hoover’s abrupt announcement that he would campaign in Tennessee. Most of the newspapermen had never even heard of the city of some 5,000 inhabitants.

New York governor Alfred E. Smith, the Democratic nominee for president, announced he, too, would campaign in Tennessee, visiting Nashville.

When Herbert Hoover’s train pulled into Elizabethton following a stop in Bristol, estimates of the crowd ran from 35,000 to as many as 70,000 people awaiting the candidate. Still, most observers believed the GOP state ticket was weak. The Knoxville News-Sentinel thought Raleigh Hopkins had no hope whatever of defeating Governor Henry Horton and acknowledged James A. Fowler, the Republican nominee for the United States Senate was “an able man,” but stood little chance against Senator K. D. McKellar. The News-Sentinel quoted leading political observers as thinking McKellar’s popularity in the Senate race, along with the weakness of Raleigh Hopkins in the gubernatorial contest made it highly likely Al Smith would carry Tennessee in the presidential contest.

Once again, Tennessee Republicans enjoyed statewide success with the presidential candidacy of presidential nominee Herbert Hoover. It was less an endorsement of Hoover than it was a rejection of Democratic nominee Alfred E. Smith, the governor of New York. Smith was Catholic and a “wet”, meaning he was against the national prohibition law in effect at the time. The Republican candidates for governor and the United States Senate lost to the incumbents, Henry Horton and Kenneth D. McKellar, respectively. Reece’s opponent in the 1928 general election was William Isaac Giles, who ran as an enthusiastically wringing wet candidate, intent upon the repeal of prohibition. Giles went well beyond repeal, stating he was for the government manufacturing alcoholic beverages through government-run liquor stores. A farmer, Giles was well known in his native Washington County and was a familiar sight to citizens who bought his peaches and apples. Giles was something of an eccentric and was a perennial candidate for public office whose left hand was paralyzed. “The remedy for this abominable liquor curse that has caused the broken unity of both church and nation cannot be remedied until the government manufactures and sells liquor at actual cost, in a limited amount,” Giles insisted.

For he second time in two years, Carroll Reece beat William Isaac Giles for Congress. Reece won almost 79% of the ballots cast and won almost 93% of the vote in his home county of Johnson. Reece had good reason to celebrate; there would be yet another Republican administration in Washington and he continued to gain seniority and influence in the nation’s Capitol. Yet the presidency of Herbert Hoover would cost Carroll Reece dearly in political terms in two years’ time. Congressman Reece would face the most serious contest to hold his seat in Congress since he had challenged an incumbent in 1920 inside the Republican primary. Carroll Reece would also face the first true challenge to his political supremacy in Tennessee’s First Congressional District in the 1930 general election.