Catching up with Tonya Stoutt-Brown

By design on April 4, 2021Comments Off on Catching up with Tonya Stoutt-Brown 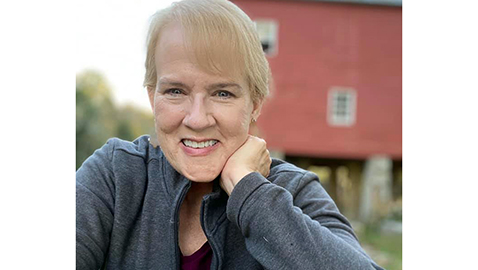 You’ve seen her on television and on the ever popular TikTok app or you’ve heard her on Knoxville Radio. Now a days it seems Tonya Stoutt-Brown is everywhere in the media. She’s animated, quirky and just plain appealing or appalling, depending on your taste.

The Knoxville Focus reached out to the Knoxville personality and asked her a few questions. Her answers may surprise you.

What are you doing now professionally or in retirement?

I’m a public relations and media specialist for Covenant Health, East Tennessee’s largest healthcare provider. On the side, I do occasional work on the radio, that’s my first love.

How did you get started in your profession?

I decided I wanted to be in radio when I was about 11 years old, listening to Adele Arakawa, CP and Walker Johnson on WRJZ-AM. I got my foot in the door at WGAP in Maryville at the age of 18 because my sister was working there. After graduating from UTK I landed the gig I’m best known for – news and “personality” on WIVK. I left fulltime broadcasting 14 years later to focus on being a mom and I landed in public relations when I started looking for a job with regular office hours.

What’s your favorite past position?

Working in media and public relations, you always wear a lot of hats with each position you hold. I love to entertain and inspire people, so that’s been my favorite part of every position I’ve ever had.

Who are some of the people you worked with over the years and do you have a favorite?

I’ve met so many people and had so many wonderful coworkers and associates. Some of them are well known names but many of them are engineers, office staff and maintenance people you’ve never heard of. I’ve had some of the best laughs working with radio engineers on live broadcasts! But if I had to pick a favorite past coworker – and he’s not necessarily a favorite, but the sentimental favorite – it would be Ed Brantley. I learned so much about radio from Ed and I also learned a lot about life from him. He told me I should never let my work take over my life and that I should always have something or someone to go to when my shift is over. That’s made my life so much more rich and rewarding and has impacted many decisions I’ve made.

Tell me about your family.

I could talk forever about my family! I’m married to a wonderful Blount County native and I have two beautiful and intelligent grown daughters. My oldest is a teacher and my youngest is in college with a call into fulltime ministry. I have to mention my mom, too! She is 85 years young and has become one of my very best friends.

Do people recognize you often?

What are your innate talents, are you a show off or quirky?

I guess I’d say I’m a quirky and overly expressive introvert. That’s why radio was always so great for me. I could be wacky and talk to people without being in a room with too many at a time. That’s what’s made TikTok so much fun, too. I can dress up in costumes or dance for thousands of people while I’m in a room by myself!

What are your future plans?

I’m still figuring that out. My husband and I are in that transitional stage of becoming empty nesters. We’re planning retirement, so there’s not a lot of talk about big career moves at this point. We both know we want to do something after we retire, we’re just not sure exactly what. I love to write and I love to perform, so there’s no telling where that will take me.

Tell me about “Karen” character.

When I joined TikTok I was much, much older than the vast majority of people on the app, and in the comments a lot of them asked me if I was a “Karen.” I didn’t know what that meant, but I could tell it was supposed to be an insult. I soon found out that “Karen” is slang for a pushy, entitled woman, usually white and prejudiced.

I thought it would be funny to do a dance with subtitles of things a “Karen” might say. I had no idea how it would explode. It was featured on a nationally syndicated show and the Associated Press took it worldwide. Then The Washington Post called me for an interview! I think it was just something that was timed right.

TikTok has come under fire since I first joined the app – and for good reason. I’ve stayed with it because I’ve seen God work through my video posts. People who have left church and turned away from God come to my profile for a laugh on one video and end up finding scriptural truth in other videos I’ve posted. I’ve had many people post that I’m the only Christian they follow on TikTok, which is so humbling. A lot of people have this idea that God is angry and mean and that His people are all self-righteous and judgmental or terrible hypocrites. I’m very far from perfect, but I’m as sincere as I can be and I offer an abundance of God’s grace. I’ve found that’s what these young people on TikTok need. Really, God’s grace is something we all need, no matter what age we are.

I’ve had the honor of being in the presence of five United States presidents. First was Ronald Reagan at the airport when my high school Current Events class came to see him. As a reporter, I’ve covered local visits by both George Bushes and Bill Clinton. I met Jimmy Carter when he came through town for a book signing. The most memorable occasion was one of the visits by George W. Bush, because his secret service agents kept staring at me and it scared me. Then I realized it was because I had changed my hair color and it didn’t match up with the picture on the photo ID hanging around my neck!

Catching up with Tonya Stoutt-Brown added by design on April 4, 2021
View all posts by design →