Catching up with Yassin Terou

By design on May 3, 2020Comments Off on Catching up with Yassin Terou 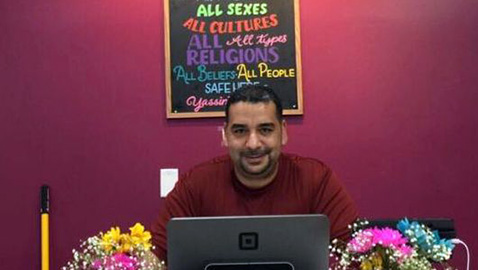 He has been honored by national, state and local organizations and recognized by Reader’s Digest and ABC’s “Good Morning America.” Despite all the attention and accolades, this restaurateur doesn’t seem to let fame go to his head.

The honors began with Yassin Terou opening up his Middle East food catering venue Falafel House downtown. The Walnut St. location officially became a restaurant in 2014. He later added another restaurant in West Knoxville. During the coronavirus pandemic Terou has been feeding the homeless with deliveries, providing food to first responders, providing a safe working place for employees and preparing the restaurant for customers.  The Knoxville Focus chatted with Terou recently and asked a few questions. Here is what he replied:

Asked about his restaurant and how that’s working for him he replied, “Being a restaurant business owner puts me in the position to be able to connect with the community and grow as a person. I love being able to help give back!”

The native of Damascus, Syria explained, “I chose Knox County because the weather was not very cold and the expenses to live were affordable,” when asked why he chose to live in Knoxville.

“After that the love between me and the city started to grow and I feel at home.”

“I hope we can build more bridges between the community and establish more businesses to support the economy. Be able to bring ideas and people together to build our county,” he replied when asked about his hopes for our area.

When he’s not working, Terou enjoys spending time with his family, “watching my kids grow and going to new places and doing new things.”

What does he consider main accomplishments in life?  “Having an awesome family and being part of the reason my restaurant was named Nicest Place in America on National News.”

When asked how other people see him, he said, “I think they see me as someone who makes food with love and also builds bridges!”

“Maybe I would have started my journey to America sooner,” Terou said when asked what he would do over in his life if he had an option.

One thing he wouldn’t do over is being the owner of a place where everyone is welcomed.

Asked about his favorite food his answer was “Falafel, shawarma and local breakfast/brunches!”

How would he like to be remembered? “With a good smile and delicious smell of my food!” he answered.

Catching up with Yassin Terou added by design on May 3, 2020
View all posts by design →