By design on July 26, 2020Comments Off on Catholic standout facing a new hurdle in pandemic 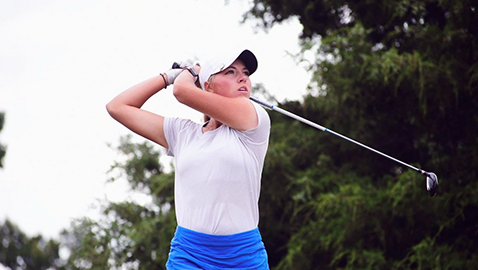 The pandemic has done a number on Kennedy Anne Noe’s scorecards.

And with the 2020 high school golf campaign officially starting today (July 27), it will be interesting to see if the Knoxville Catholic senior, one of the state’s top players, can clear her mind and get back to putting up scores like she did at the end of last season.

“This pandemic has affected me a lot,” Noe admitted last week. “I’ve been able to practice a lot, which has been great. But with all of the unknowns regarding going back to school for my senior year, the changes and unknowns in college golf recruiting, and just the overall feeling of a pandemic, my mental game has really suffered and my recent tournament scores have shown that.”

Kimberly Anne will get her first opportunity in the new season in the annual 5Star Prep Masters at Oak Ridge Country Club. She finished third in the event last year with a 76-77-153.

“Most of the tournaments I was scheduled to play in this spring and summer have been either cancelled or postponed, especially the invitationals,” added Noe.

However, she did get to play in the inaugural Dye Junior Invitational, which was held at Crooked Stick Golf Club in Carmel, Ind., in late May. The 54-hole tournament featured national elite junior players.

Noe and Farragut’s Lexanne Halama were among the field of 33 girls. Noe tied for 26th place and ended her three rounds 26-over-par. Halama finished in a five-way tie for 15th and was 16-over.

Noe also has played in some local events.

“My scores are not great though because my mental game is a mess,” she said.

That wasn’t the story for Noe last fall in the TSSAA state tournament when she shot even par 72-72-144 at WillowBrook Golf Club in Manchester to finish second in Division II-AA behind Stanford signee Rachel Heck of St. Agnes Academy.

Noe’s showing was the best among local female golfers at the state in 2019, and with Heck graduating, Kennedy Anne should be the favorite this year.

Halama, a University of Illinois signee, also will be among the local “players to watch” this season. She tied for third place in the 2019 Large Class division, carding a 74-73-147, and is expected to compete with defending state champion Lynn Lim of Station Camp again for the title this season.

Halama said COVID-19 almost wiped out her entire spring schedule and greatly altered her summer schedule. She also indicated her scoring hadn’t been that great.

Lexanne will not get to defend her 5Star Prep Masters crown this week because of a prior commitment to play at an AJGA event in Sevierville. She won the Prep Masters last year with a sizzling 12-under 67-65-132.

“I have been working hard at parts of my game that have held me back from scoring better in previous tournaments,” noted Lexanne, “so I’m excited to see how I’ve improved and also to see what I can continue to work on in the coming months.”

In Division II-A, Allie Cooper of Christian Academy of Knoxville tied for sixth place and teammate Kate Faulkner finished eighth at state last year. Together they led CAK to third place in the team competition. Both are back this year – Allie a senior and Kate a sophomore.

Farragut’s Lady Admirals were second at the state last year, just two shots behind Station Camp. Senior Lindsay Ott is expected to fill Aynsleigh Martin’s spot in the No. 2 position behind Halama.

Catholic standout facing a new hurdle in pandemic added by design on July 26, 2020
View all posts by design →