Catholic taps Travis Mains to be next girls basketball coach

By design on April 19, 2020Comments Off on Catholic taps Travis Mains to be next girls basketball coach 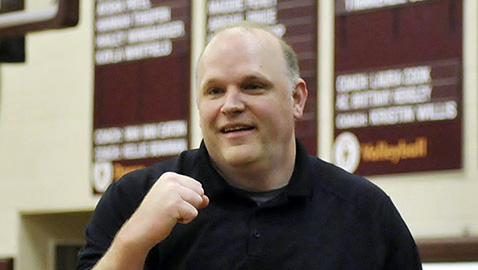 The school announced on Tuesday that it has hired Travis Mains and he’s eager to get to work with the Lady Irish.

“I thought this was an excellent opportunity,” said Mains, who previously coached at Daniel Boone High School from 2013-2018. “The support at the school is great and this is a great opportunity for our family.”

His wife, Missey, will teach at Catholic and she will assist Travis in the girls basketball program.

With the Lady Blazers, Mains compiled a coaching record of 133-63 and in his final season at his alma mater, he guided the Daniel Boone girls’ team to a 30-5 mark and their first-ever appearance in the Class AAA.

Mains left the program to work with his daughter, Sydney. Travis and Missey also have another daughter, London, who will enroll at St. Joseph’s School in Fountain City.

She’ll be a freshman at KCHS in the fall.

Basketball is a family affair for the Mains Family and Travis is a self-proclaimed basketball junkie and has been for a longtime. He played for the Trailblazers under coach Bill Snyder, who instilled a passion for the game for the new Lady Irish head coach.

“He had a big impact on me and made me want to be around the game all the time.”

At Catholic, Mains inherits a program that has had more than its share of struggles. He replaces Freeman Pinkney, who resigned in March after two seasons.

Pinkney had things looking up for the Lady Irish. He guided Catholic to an 11-18 record and an appearance in the Division II-AA State Quarterfinals.

At Catholic, Mains will have one of the area’s top point guards. Jazmin Williams.

Williams, a rising sophomore, had a big season last year before suffering a season-ending injury. The Lady Irish didn’t win another game after Williams was hurt on Jan. 30.

“She’s a special player,” Mains said of Williams. “I can’t wait to get to know the girls currently in the program and begin working with them.”

Away from the game, Mains loves to be in the outdoors but basketball is his true passion.

“I love to be in the outdoors. We all love being at the lake or working in the yard,” he said. “But we’re pretty busy with basketball.

“We’re North Carolina basketball fans and we have been for a long time and we’re Tennessee football fans. I love basketball and I remember getting the Street & Smith’s (yearbook magazines). I used to get them every year.”

Catholic taps Travis Mains to be next girls basketball coach added by design on April 19, 2020
View all posts by design →