By design on September 9, 2018Comments Off on Central uses turnovers to down Hardin Valley, 35-20 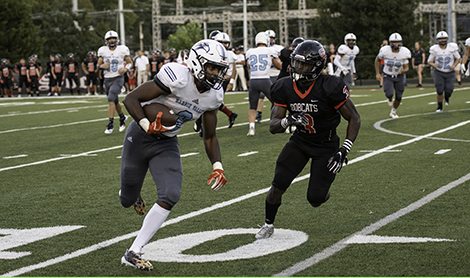 In a non-regional matchup between the Central Bobcats and Hardin Valley Academy Hawks, Central took advantage of five Hardin Valley turnovers to down the Hawks 35-20 at Central. Bobcats’ strong safety Xavier Washington had 12 tackles, two forced fumbles, two sacks, and an 86-yard kickoff return for a touchdown to spark Central.

Washington’s kick-return touchdown came after Hardin Valley had narrowed the Bobcats’ lead to eight points. “At first I juggled it, so I thought I was going to drop it but then I re-secured it and I just saw a hole and my teammates blocked me alI the way to the end zone” Washington said.

Both teams struggled offensively at the beginning of the game. Hardin Valley’s best possession took place when the Hawks drove to the Bobcats’ 15-yard line. However, the Hawks went backwards on a penalty and failed on a 4th and 18.

Two of the Hawks’ first half fumbles were mishandled quarterback-running back exchanges. Following its second fumble recovery, Central moved the ball in five plays. Running back Jason Merritts ran for a 6-yard touchdown for a 7-0 Bobcats lead with 9:58 left in the second quarter. Merritts led all running backs in the game with 17 carries for 122 yards and the 6-yard touchdown.

Hardin Valley got the ball back, but the Hawks fumbled again when quarterback Grayson Vaughn was sacked in Hardin Valley territory.

Central took advantage. On 2nd–and-2, wide receiver Braden Gaston scored on a 3-yard touchdown run out of the Wildcat formation. The Bobcats would miss the extra point but led 13-0 with 6:57 left in the second quarter as the Bobcats had scored two touchdowns in under three minutes.

Shaking off the offensive rust, the Hawks finally got on the board with 4:27 left in the third quarter. Wide receiver Luke Defur threw a reverse pass to quarterback Grayson Vaughn for a touchdown to cut the Bobcats’ lead to 13-7.

Eight seconds later, Defur intercepted a Dakota Fawver pass and ran it back 25 yards for a touchdown. The Hawks made the extra point to lead 14-13.

However, the Hawks’ lead did not last for long. Central converted a key third down on Fawver’s pass to C.J. Johnson. One play later, Trey’sean Moore ran for a 21-yard touchdown for a 19-14 lead. Gaston converted the 2-point conversion for a 21-14 Central lead with 34 seconds left in the third quarter.

Taking advantage of another Hardin Valley fumble on the Hawks’ ensuing possession, the Bobcats moved the football into Hawks’ territory. A personal foul penalty on Hardin Valley gave the Bobcats a first-and-goal at the 5-yard line. Gaston scored one play later for a 28-14 Central lead.

Despite the turnovers, the Hawks would not go away. On a 1st-and-10 at the Central 35-yard-line, Vaughn found receiver Cartez Campbell for a 35-yard touchdown pass to cut the score to 28-20 Central.

That’s when Washington’s kick return sealed the game. “We put him back there,” Bobcats’ Head Coach Bryson Rosser said. “He saw a crease and took it to the house. He’s an unbelievable player for us, unbelievable athlete, and he got a chance to showcase that.

“Every time they (Hardin Valley) got close, our guys tried to lock in as best as they can and try to keep them out of the end zone and get them from getting on the scoreboard, so really proud of the effort of my guys tonight.”

Central (2-2) travels to Seymour Friday in a Region 2-5A matchup. Hardin Valley (2-2) hosts Region 1-6A Morristown-Hamblen West in the Hawks’ first regional game.

Central uses turnovers to down Hardin Valley, 35-20 added by design on September 9, 2018
View all posts by design →