By design on April 26, 2020Comments Off on Central’s Gaston signs to run track for Tennessee Wesleyan 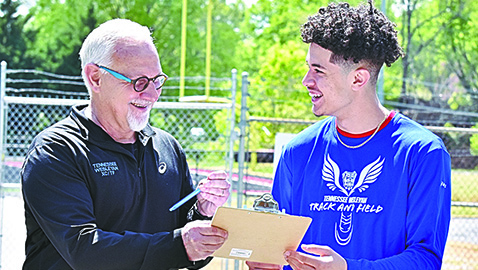 The coronavirus pandemic forced Braden Gaston to take a bit of a leap of faith.

And that has landed him on the track team at Tennessee Wesleyan University.

Gaston, a senior at Central High School, signed his National Letter of Intent to run hurdles and compete in the long jump for the Bulldogs.

Gaston, who also played football in Fountain City and was part of back-to-back Class 5A State Championship teams for the Bobcats in 2018 and 2019, signed to attend school in Athens on Monday, April 20.

But he never made a recruiting visit to the school. But he has faith in the Tennessee Wesleyan coaching staff and a former Central High track and field teammate.

“I liked the coaches. They have a great vision for the program,” said Gaston, who will enter college as an undeclared major. “I was being recruited as a hurdler but I will also compete in the long jump.

“I never made a visit down there but I figured I’d give it a try. I have a guy who was my teammate at Central last year, Trafton Garner, and he told me that it would be a good fit there and that I would enjoy the experience there.”

Despite never making a visit to the school in Southeast Tennessee, Gaston said that he knew that the campus and class sizes were small and that was a factor in his decision.

“I knew what it was all about down there,” Gaston said.

He also noted that it will be nice to attend school relatively close to home.

“I was willing to go far away and this was a late decision that I made in the end,” Gaston said. “This is my first year of college and it is close to home,”

Central, like all high schools in Knox County, makes an event of a college signing days, but due to current circumstances, Gaston’s signing ceremony was a small one but that didn’t temper his excitement.

“I’m excited,” he said. “This is a once-in-a-lifetime experience.”

Central’s Gaston signs to run track for Tennessee Wesleyan added by design on April 26, 2020
View all posts by design →