Cherokees regroup and roll past Gibbs, 37-17

By design on September 7, 2020Comments Off on Cherokees regroup and roll past Gibbs, 37-17 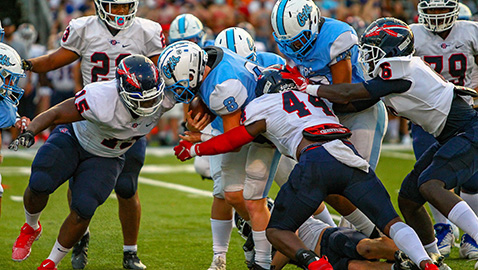 What a difference a week makes.

After being shut out and stunned by Grace Christian, South-Doyle responded with a 37-17 Region 2-5A win over Gibbs Friday night in Corryton.

The Cherokees’ offense was clicking from start to finish, while the Eagles made a number of mistakes and couldn’t climb out of a deep hole after being outscored 17-0 in the second quarter.

Terrell Brown and Shawn Gary led South-Doyle’s impressive ground game, but it was a 95-yard catch and run by wide receiver Preston Sisler that gave the Cherokees a three-score lead (31-10) with 4:23 remaining in the third quarter.

South-Doyle Coach Clark Duncan said the 15-0 loss at GCA was “uncharacteristic of us” after the game.

“Our guys know we’ve got a really good football team and quite frankly I think a lot of us were embarrassed with how we played last week,” added Duncan.

“They regrouped and we probably had one of the best weeks of practice that we’ve had in a long, long time. It was a difference maker tonight.”

The win lifted S-D to 2-1 overall and 1-0 in the region. The Cherokees will have a tough non-region test at home against Anderson County (2-1) this Friday.

“We shot ourselves in the foot,” said Gibbs Coach Brad Turner. “We can blame a thousand things, but we didn’t execute.”

South-Doyle took a 7-0 lead midway through the opening quarter on a 2-yard run by Brown, but Gibbs quarterback Colton Qualls scored on a 7-yard run and John-Aidan Pittman’s PAT kick pulled the Eagles even.

The game matched two of the best place-kickers in the area and Ewan Johnson’s 38-yard field goal put South-Doyle back on top 10-7 at the start of the second quarter.

The Cherokees struck for two touchdowns within a 30-second span late in the period. Brown broke loose on a 41-yard run and quarterback Nick Martin jogged into the end zone from 10 yards out after a fumble recovery by Levi Herold at the Gibbs’ 10-yard line.

After Gibbs had failed to extend a scoring opportunity midway in the quarter, “they(South-Doyle)  scored two touchdowns before halftime and got the momentum,” said Turner.

Gibbs appeared to open the second half with more fire and a sense of urgency. Pittman drilled a 41-yard FG to cut the deficit to 24-10 with 5:26 left in the third quarter.

On the ensuing kickoff, however, the Eagles were flagged with back-to-back offside penalties and Gibbs also was hit with an unsportsmanlike conduct foul after an outburst by Turner over the calls.

“I probably should have kept my cool, but at some point I’m out here for these players and I’ll do whatever I got to do for them,” said Turner after the game.

Despite having to kick off from deep in its own territory, the Eagles flipped the field. South-Doyle’s kick returner was tackled at the 6-yard line and a personal foul on the Cherokees put them at the 3.

Brown gained two yards to the 5 on first down and on the next play Martin passed to Sisler in the flat and the Cherokee senior went the distance.

Gibbs drove to the South-Doyle 2 in the fourth quarter but a fumble recovery by Austin Mikles ended that threat.

Qualls plunged into the end zone from the 1 for the game’s final TD at 4:13.

“We’re right where we were last year (1-2 overall and in the region),” said Turner. “Last season we turned it on and went on a win streak, and hopefully we can do that this year.”

Cherokees regroup and roll past Gibbs, 37-17 added by design on September 7, 2020
View all posts by design →