By design on November 8, 2020Comments Off on Congressman William Anderson of Tennessee 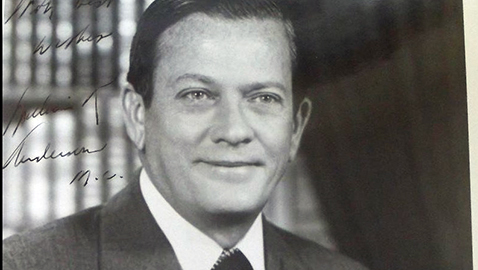 William Anderson was a rare commodity in Tennessee: a military hero who was a liberal, representing a largely rural district.  After commanding the submarine Nautilus and making the first successful run under the polar ice cap surrounding the North Pole, Bill Anderson came home to Tennessee and entered politics.  From the very beginning, Anderson was a political maverick.  Anderson made an Independent bid for governor in 1962, rejecting the leadership of former governor Frank Clement who was making a political comeback.  Anderson surprised Tennessee Democrats when he announced in September of 1962 he was rising above partisanship to run for governor.  “I am a Democrat, committed to the principles of that party,” Anderson said, “but the reins of government have been wrested from the hands of the people.”  In his announcement, William Anderson condemned “fraudulent polling practices and self perpetuating leap frog government” during the Clement and Ellington administrations, which the candidate believed “have brought shame to the state” of Tennessee.  Anderson had briefly pondered entering the Democratic primary, but thought better of it.  Eventually, William Anderson changed his mind due to what he referred to as “grass roots level talks” with people all across Tennessee.  The former Navy captain acknowledged the odds were long in winning the general election, but felt Tennesseans were more focused on genuine issues in the month before voting began.  Anderson said he would kick off his gubernatorial campaign in his hometown of Waverly.  Flanked by his wife, son, Michael, and father, the forty-one year-old candidate addressed the fact he had been away from Tennessee for sometime.  “I do not believe that sweat and grime collected at a lumber rail in Waynesboro followed by 20 years in the Navy necessarily qualifies a man for governor.

“On the other hand, I do not believe these disqualify him.  Nor do I believe anyone expects a man to give up his citizenship in order to serve his country.  I am a Tennessean and my roots have always been here,” Anderson said.  William Anderson had been born on a farm in Bakerville, Tennessee, which his parents still operated when he announced his candidacy for governor.  Appointed to the U. S. Naval Academy in 1939, William Anderson entered the submarine service and was decorated by President Dwight D. Eisenhower for his North Pole mission.  Anderson saw action in both World War II and the Korean conflict before being named commander of the Nautilus and serving the last three years of his time as an assistant to the Secretary of the Navy.

With little more than a month before the general election, William Anderson began his quixotic campaign for the governorship of Tennessee, facing Republican attorney Hubert Patty who would become a perennial candidate for public office and Frank Clement who had been elected to two terms as governor in 1952 and 1954.  Clement had been the first man in Tennessee to serve a four-year term as governor after the state’s Constitution had been changed in 1953.  Anderson campaigned gamely and surprisingly came in ahead of Patty, winning more than 32% of the vote, but ran far behind Clement, who won just over 50% of the ballots cast.

Bill Anderson was not done with politics and the death of Senator Estes Kefauver offered him a new political opportunity.  Sixth District Congressman Ross Bass became a candidate for the United States Senate seat held by the late Estes Kefauver.  Governor Clement had appointed Tennessee’s “Mr. Democrat”, Herbert S. “Hub” Walters, to fill the vacancy and promptly became a candidate for the Senate seat himself.  Clement was challenged by Congressman Bass and William Anderson ran to succeed Bass.  Ross Bass had been in Congress since 1954 when the incumbent, Pat Sutton, had run against Estes Kefauver.  Anderson was one of seven candidates inside the Democratic primary and his most serious opponent was veteran Democratic candidate John R. Long, who had once been Tennessee’s Commissioner of Insurance and Banking.  Long, referring to Anderson’s absence from the state while serving in the Navy, sniffed, some candidates “are such strangers to the Sixth they can’t stand on the courthouse steps of any county in this district and know more than a handful of people.”  As it happened, a handful of people proved to be enough for William Anderson, who barely scraped by John R. Long in the Democratic primary.  Anderson won by 317 votes.

The general election was merely a formality and Anderson defeated his Republican opponent, Cecil Hill, with almost 77% of the vote.  William R. Anderson was returning to Washington, D. C. as a member of Congress.  Almost immediately, Bill Anderson surprised some by his liberalism and offering strong support to the presidential administration of Lyndon Johnson and his Great Society.  Ross Bass had demonstrated some distinctly liberal tendencies, being the only Democrat representing a rural district who had voted for Johnson’s Civil Rights Act of 1964.  Congressman Anderson worked hard to represent the people of Tennessee’s Sixth District, but many Democrats were never entirely comfortable with his political philosophy.  Anderson faced a serious challenge inside the Democratic primary in 1968 when he faced John T. Bragg of Murfreesboro.  Bragg won almost 42% of the vote and Anderson’s percentage in the general election dipped almost twenty points from quite nearly 80% to less than 60%.  Anderson’s campaign was certainly affected by the three-way presidential race between Republican Richard Nixon, Democrat Hubert Humphrey and Independent, George Wallace.  The former Alabama governor ran well in Tennessee, actually placing second behind Nixon with 34% of the vote.  Nixon was less than 50,000 votes ahead, while Humphrey ran third with 28% of the vote.  Clearly there were more than a few Democrats inside Tennessee’s Sixth Congressional District who wanted a more conservative congressman.  Yet William R. Anderson made no effort to moderate his stands on issues; if anything, he became more liberal.

By 1970, William R. Anderson appeared to be in good political shape, winning his primary with better than 90% of the vote and the general election with a whopping 82%.  In 1971 the legislature had to redistrict Tennessee’s Congressional districts and the Volunteer State was losing a seat in the House of Representatives.  For a while, it appeared Anderson might be placed in the same district with Congressman Ray Blanton and things were changing politically in Tennessee.  1970 had brought the election of Winfield Dunn as governor and three-term U. S. senator Albert Gore had lost his seat to GOP Congressman Bill Brock of Chattanooga.  Republicans held both of Tennessee’s seats in the United States Senate and the governorship.  Anderson’s dilemma of being placed in the same district with another Democratic incumbent disappeared when Blanton opted to run against Senator Howard Baker.  Still, Anderson faced a determined challenge inside the Democratic primary from state representative Carter Witt.  More ominous was the emergence of young Robin Beard, Commissioner of Personnel in Governor Winfield Dunn’s administration.  Youthful, vigorous, and a highly attractive candidate, Beard demonstrated a knack for campaigning.  Anderson immediately realized his liberalism was a liability during a year when Tennesseans were aghast at the notion of George McGovern’s presidential candidacy; there was every reason to believe President Richard Nixon would sweep the state.  Indeed, Richard Nixon carried Tennessee five times; twice as Dwight Eisenhower’s vice-presidential running mate in 1952 and 1956, and three times as a presidential candidate: 1960, 1968 and 1972.  Worse still, there was reason to believe the size and dimension of Nixon’s victory in Tennessee would be of epic proportions.  Congressman Anderson had his photograph taken after obtaining a lifetime membership in the National Rifle Association.  Nor had redistricting done Anderson any favors; several conservatives counties were added to the district, while others the Congressman had represented for years were shifted elsewhere.  Republicans also realized Anderson was in trouble and immediately began planning to bring Vice President Spiro Agnew to Tennessee to campaign for Robin Beard.

Anderson’s opponent inside the Democratic primary sounded more like a Republican than a Democrat, thundering, “I think George McGovern and William R. Anderson are going to get a message when Tennesseans go to the polls.”  Witt warned, “There is a very definite danger that the Democrats will lose the seat in November if Congressman Anderson is renominated.  They have to have a moderate candidate to win this district.”  Anderson won the primary with just over 58% of the vote and Carter Witt tried to remain a loyal Democrat by backing his former opponent in the general election.  Naturally, Witt’s comments about the Congressman had changed substantially.  Witt said Anderson “is a man of integrity who is not afraid to speak his mind.  I know from personal experience he is a courageous and tenacious fighter.”  Witt urged his supporters to vote for Anderson in the general election.  It likely did Anderson little good when Massachusetts senator and liberal icon Edward “Teddy” Kennedy made his second pilgrimage to Tennessee to campaign for George McGovern.  Many Democrats inside the Sixth Congressional District had not forgotten the inference in Carter Witt’s campaign billboard, which had been plastered all across rural areas, stating simply: “Carter Witt – American.”

According to the Jackson Sun, Congressman Anderson’s reelection campaign in 1972 got off to a “slow start.”  Almost immediately, Anderson encountered hostility from some inside his own party.  While touring the Hickman County Courthouse, Anderson encountered County Court Clerk Ed Dotson, who snarled, “I had two boys in Vietnam while you were helping to burn draft cards with the Berrigans,” referring to the Berrigan brothers. “You were defending them Berrigans when J. Edgar Hoover was trying to indict them.”  Anderson, “visibly” shaken “by the argumentative Dotson,” managed to reply, “Somebody’s got his facts wrong” before quickly moving on past the Court Clerk.  A “dove” on the Vietnam War, Congressman Anderson later admitted to a reporter he had been the “target of much criticism for his support of the Berrigan brothers”, Roman Catholic priests who had been accused of “subversive anti-Vietnam demonstrations.”

Robin Beard hammered at Anderson’s liberal record in Congress and stressed he would back the Nixon administration, not hamper it in Congress.  Beard charged Anderson had voted against President Nixon’s plan to bring about an “acceptable conclusion” to the war in Vietnam.  “He voted in favor of letting the Jane Fondas and her un-American friends run at will to give aid to the enemy,” Beard said.

The new Sixth District ran from the Nashville suburbs to those of Memphis.  Beard swept the Memphis suburbs on Election Day, which had been included in the newly configured Sixth Congressional District.  Beard won a convincing victory, taking almost 57% of the vote.  Beard proved to be a highly popular congressman and eventually was the GOP nominee for the U. S. Senate against Senator Jim Sasser in 1982.

By the time he died on February 25, 2007, William R. Anderson had been so long removed from Tennessee and politics he was little remembered, save for his having commanded the Nautilus.  Surrounded by his wife and sons, William R. Anderson passed away peacefully at a hospital from kidney failure.  There were no editorials lauding his service to his country and to Tennessee; there should have been.

Congressman William Anderson of Tennessee added by design on November 8, 2020
View all posts by design →