Creation of a Sports Authority on City Agenda

By design on December 13, 2020Comments Off on Creation of a Sports Authority on City Agenda 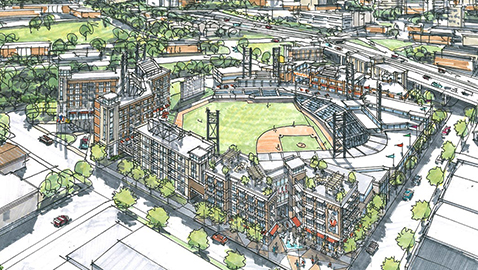 The creation of a Knoxville-Knox County Sports Authority is on the city council agenda for Tuesday evening in a request from city administration.  The Authority would cover financing and construction of the new stadium.

Earlier last year Randy Boyd, owner of the Knoxville Smokies, announced plans to build a $142 million apartment and  baseball complex adjacent to the Old City. Boyd has 7 acres of a former industrial park. The complex would include apartments and community space and, aside from the baseball stands for fan seating, the apartment building would feature bleachers atop the building.

The council also will discuss the renewal of their Nashville lobbyist, Fred D. (Tony) Thompson Jr. , in a $60,000 annual agreement for government relations service. Thompson is the son of the late Fred Thompson, former U.S. Senator and actor.

Austin Homes Phase II may get $4.5 million in an agreement with the Community Development Corporation for site infrastructure along Summit Hill, Harriet Tubman and Bell streets.

COVID-19 funds are involved in three homeless programs with funds going to the Arts and Cultural Alliance, Connect Ministries and UT. The university may get $198,441 to administer the Homeless Management Information System.

The council will also look at a contract to provide underground utility location services for the city’s streetlight program, an agreement with AT&T to use their utility poles, and an agreement on the use of Volunteer Landing Marina subject to TVA approval.

Twelve receptacles for RV connections may be installed on the top of Garage B of the Civic Coliseum and Auditorium. The contract would be with Miller Electrical Contractors Inc. for $43,284.

The council may express thanks to the Boyd Foundation for donating $250,000 for construction of five new dog parks within the city.

Vice Mayor Gwenn McKenzie is asking for acknowledgment and an apology for actions hurting African Americans and to address equity restoration. She and several council members also plan to congratulate Vice President-elect Kamala Harris on her selection as Joe Biden’s running mate.

Mayor Indya Kincannon has several appointments to the Neighborhood Advisory Council, the Industrial Development Board, the Downtown Cinema Inc., and the Knoxville Transportation Authority Board.

On second reading the council may approve $100,000 for the Knox Education Foundation to support efforts to secure internet access for local school children.

Creation of a Sports Authority on City Agenda added by design on December 13, 2020
View all posts by design →