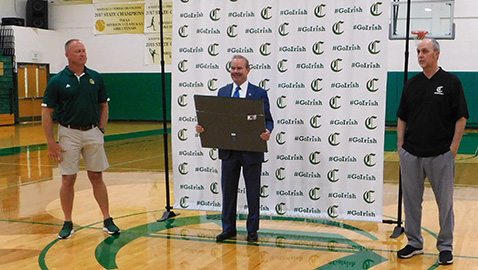 When longtime Knoxville Catholic High School boys basketball coach Mike Hutchens stepped on the newly refinished floor in the gym, it marked the first time that he’d been on the basketball court since March.

Hutchens, who guided the Irish to the 2020 Division II-AA State Championship in Nashville, hadn’t been at school since the COVID -19 pandemic forced the school and others throughout Tennessee and the nation to shut down early.

Daniel made the presentation of the proclamation to Hutchens on behalf of the entire Tennessee House of Representatives and the Chairman said he was proud to stop by and honor the state champions.

“Everybody in the House of Representatives in Tennessee, and especially in this area of Tennessee, is extremely proud of these young men,” Daniel said. “We always do this to honor our state champions and it’s always special.

“But this is the first state championship in basketball for Knoxville Catholic, so that makes this really special.”

The title has been a long time coming for the Irish and Hutchens said that it was for all of the great players that he’s coached throughout his career at Catholic.

“I’m just really proud of the kids because they’ve worked really hard,” Hutchens said. “This is for them and it’s also for all the players who have played here and it’s really special.”

The veteran coach noted that the title didn’t come easily for his young squad, which had three sophomores and a freshman, along with the recently graduated Akeem Odusipe, who will play at Vanderbilt next season.

“But I think after that game, that these kids knew how good they could be.”

Hutchens said the thing that he’ll remember about this group of players is its unselfish play.

“This thing about this team is their unselfishness,” he said. “We had a young team but our point guard, B.J. Edwards, had 200 assists this year and we had a shooting guard (rising sophomore Blue Cain) who had 85 assists.”

Daniel is a Republican, who represents District 18.