By design on February 28, 2021Comments Off on Doc Julian 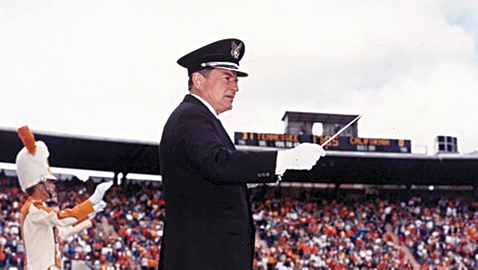 Three significant hires in the early 1960s had a profound impact on the University of Tennessee athletic program and its history.

Dr. W. J. Julian, known best as “Doc” or “Doc Julian,’’ and Haywood Harris came on board in 1961, as director of bands and sports information director, respectively. Doug Dickey followed in December 1963 as head football coach.

This was a time the Vol program was reaching for the stars, and each of them had their fingerprints all over the program’s growth and development.

A native of Silver Point, Tennessee (Putnam County, pop. 1476), Julian led the band for more than 30 years. He was dedicated to a standard of excellence that became a band trademark during numerous presidential inaugurations and bowl game appearances. The band’s performances have become legendary not only in Knoxville but throughout the world of college football.

Under his leadership, the band became known for a spit-and-polish style, one that has remained a UT tradition. He designed the uniforms that are still worn today, blue and orange with an orange “T” on the back of the coat.

Julian introduced the legendary “Circle Drill,” one of the most difficult and unique marching band routines in the country.

In 1972, he brought a new song to fans at Neyland Stadium, Felice and Boudleaux Bryant’s legendary ‘’Rocky Top,” which quickly became UT’ s unofficial fight song. No one knows how many times it might be played on a fall Saturday. Julian strongly maintained there would be a mutiny among the Tennessee faithful if the band, for whatever reasons, stopped playing the country classic.

For Vol fans, there is nothing like the moment the band opens the “T,” first from the east side of Shields-Watkins Field and from the north end in 1983.

Former band members will tell you that Dr. Julian was so precise about the “T” in its early years that he and Dickey had the team practice running through the “T” so everything would be in order by game time.

As befits each, Julian and Dickey gave the other the credit for what is still a beloved Vol tradition entering the 2021 season.

Julian died in 2015 as Director of Bands Emeritus. When told of Julian’s passing, Dickey deferred the credit entirely to him.

There was a time in November 1968 at the Tennessee-Auburn game at Legion Field in Birmingham, the band was forbidden to march at halftime on a rainy Saturday night. Alabama and LSU had played in the rain that afternoon, and the powers-that-be decreed the band would damage the field beyond repair if that were humanly possible.

Dr. Julian’s response was vintage, saying, in part, that the band didn’t “spill anything.”

During the rehearsal, something went awry, and the music stopped. Someone got chewed out for something, and, a few moments later, Dr. Julian very innocently looked at the lead trumpet player and said, “Tone, please.”

The trumpet player played the introductory notes, thinking that was the appropriate thing to do.

Most everybody not connected with the band wanted to snicker, but that would have directed Doc’s wrath to them.

When the university honored College Football Hall of Fame honoree Ed Molinski’s family at halftime of the 1990 Tennessee-Notre Dame game, there was about a minute or so between the end of the Fighting Irish band’s show and the start of Tennessee’s.

The script was about 30 seconds with room for applause, but Doc seemed convinced the ceremony would run over. That 60-second interval was a classic example of the adage, “If Doc ain’t happy, ain’t nobody happy.”

You could sense him counting down mentally from 60. Steam wasn’t quite coming from his ears, but his concern was evident. “They’re going to run over,” he said more than once. The ceremony finished in about 40 seconds (with applause), and he went on about his business, happy everything had worked out. Those of us around him also took a deep breath or two and went about our business.

Julian was single-minded where the band was concerned, obsessive about the smallest detail of the band’s operation, loyal to the university, and a man whose name will be written large when the next history of the University of Tennessee is penned.

Doc Julian added by design on February 28, 2021
View all posts by design →