Doctor In the Senate: Royal S. Copeland of New York

By design on February 11, 2018Comments Off on Doctor In the Senate: Royal S. Copeland of New York 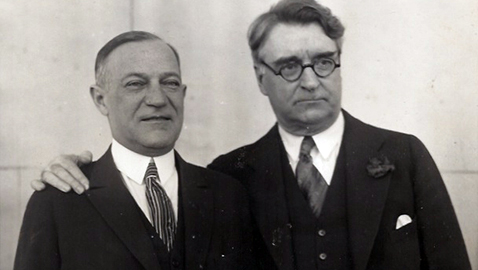 Tennessee Senator Bill Frist was not the first physician to serve in the United States Senate; almost sixty years before Dr. Frist took the oath of office, a physician left the Senate through death.  Royal S. Copeland was an unusual person and for that matter, an unusual sort of physician, especially for the times.

Born in Dexter. Michigan on November 7, 1868, Royal S. Copeland attended local schools and what eventually became Eastern Michigan University.  He went on to get an advanced degree from the University of Michigan and did some graduate work in Europe.  Returning to Michigan, Copeland practiced medicine in Bay City, which is near the Saginaw Bay.  Even while preoccupied with his medical practice, Copeland found time for politics and was elected mayor of Ann Arbor as a Republican.  Dr. Copeland also served as a professor of Ophthalmology, teaching at the University of Michigan Medical School from 1895 until his departure in 1905.  After having served as mayor of Ann Arbor for two years, Copeland was elected to the Board of Education, although he only served for one year.

Love found Dr. Royal S. Copeland rather late in life; he was almost forty when he married Frances Spalding in 1908.  The Copelands moved to New York City that same year where Dr. Copeland had been offered a post as Dean of the New York Homeopathic Hospital.  Copeland remained as Dean until he was tapped to serve as the President of the New York Board of Health in 1918.  That also happened to be the year America (and much of the world) was devastated by an outbreak of influenza, which claimed millions of lives.  Dr. Copeland received considerable press coverage in his role as President of the New York Board of Health due to his attempts to reassure a frightened public.  That same publicity was to be very helpful to Royal Copeland when he became a candidate for the United States Senate in 1922.

Copeland had switched parties and became the Democratic nominee to challenge GOP U. S. Senator William M. Calder.  Calder had first been elected to the Senate in 1916 and had not made much of an impression; stocky, with a moustache, the incumbent did not possess the flair for attracting favorable publicity as did his opponent.  The honorary chairman of Copeland’s Senate campaign was Franklin D. Roosevelt, who had been Assistant Secretary of the Navy in the Woodrow Wilson administration and the Democratic vice presidential nominee in 1920.  Copeland easily defeated Senator Calder, winning almost 1.3 million votes to Calder’s 995,000 votes.

Senator Copeland considered himself a regular Democrat and was affiliated with the powerful Tammany Hall organization in New York, which included Governor Alfred E. Smith.  Unlike Smith, Copeland was not an especially liberal Democrat; in fact, he was considered quite conservative by many.  Copeland would be joined by Robert F. Wagner in the Senate in 1927 and Wagner would prove to be a champion of fellow New Yorker Franklin Delano Roosevelt’s New Deal administration.  Wagner would sponsor some of the most notable legislation during the New Deal era, but Senator Copeland was not all that supportive of FDR or the New Deal.  Al Smith himself, bitter over his defeat for the presidency in 1928, would later oppose much of the New Deal and ally himself with reactionaries fiercely opposed to Roosevelt.

Considering Copeland’s profession, it was likely expected he would complain about anything he believed to be unhealthy about the Senate’s working environment.  Copeland became renowned for his declamations about the quality of the air in the United States Senate, which he charged was largely responsible for hastening the deaths of some thirty-four senators during a twelve year period.  Senator Copeland sponsored a resolution for the improvement of “living conditions in the Senate Chamber.” Copeland’s resolution was adopted by the full Senate in June of 1924 and the heat and humidity of Washington, D. C. likely helped the New Yorker’s resolution to pass.  The Senate Chamber was due to undergo a significant renovation, but Senator Copeland himself stopped the project as he became interested in a proposal by a different firm to ventilate the Senate.  That particular proposal had already been approved by some health experts, which doubtless appealed to Senator Copeland.  The Carrier Corporation had prospered with his invention of what was then referred to as “manufactured weather”, the modern forerunner of heating and air conditioning.  By 1929, the United States Senate had its first air conditioning system due to Royal Copeland’s insistence about improving working conditions for senators.

Senator Copeland faced the voters of New York once again in 1928 and expected to win handily.  Governor Alfred E. Smith was the Democratic nominee for president and was expected to carry his home state easily over Republican Herbert Hoover who had never run for any office before.  Copeland’s ticket mate was Franklin D. Roosevelt, who had personally been recruited to run for governor by Al Smith.  To the dismay of New York Democrats, Herbert Hoover won in a landslide, even carrying New York state.  Copeland defeated GOP candidate Alanson B. Houghton, scion of an extremely wealthy manufacturing family and a former Congressman and Ambassador to Great Britain, but his margin of victory was razor thin.  Copeland won by just over fifty thousand votes out of more than four million cast.  Yet Copeland’s personal popularity with New Yorkers was demonstrated by the fact his margin of victory was almost twice that of Franklin Roosevelt who won by just over twenty-five thousand votes.

Even though Senator Copeland was hostile to much of the New Deal, he was the beneficiary of being a Democrat in New York State when he sought reelection in 1934 at age sixty-six.  Copeland faced Republican businessman E. Harold Cluett of Troy in the general election and won easily.  Senator Copeland won reelection by almost seven hundred thousand votes.

Copeland wasn’t even Tammany’s first choice; the leader of Tammany Hall had tried to get Copeland’s Senate colleague, Robert F. Wagner, to run.  Wagner, highly popular and a big vote-getter, refused to run.  Copeland, with closer ties to Tammany Hall, required no special urging to become a candidate.

Despite an intensive and well-funded campaign, Copeland lost the Democratic nomination to Jeremiah T. Mahoney, losing by an almost two-to-one margin.  It was an embarrassing defeat, although Copeland was a candidate in the Republican primary as well and won a third of the vote against Mayor Fiorello LaGuardia.  Suspicious of the New Deal, far more conservative than Senator Wagner, Royal Copeland apparently had some appeal to Republicans.

Despite Copeland being a loyal member of Tammany Hall, he was the sponsor of anti-kickback legislation that was approved by the Senate in 1934.  As the chair of a special committee on crime, Copeland discovered that perhaps as much as twenty-five percent of all federal money involved in contracts was being kicked back from employees to employers.  Copeland’s bill made it an illegal act, subject to fine and imprisonment.

Senator Copeland was also involved in one of the most often told tales about Tennessee Senator Kenneth McKellar.  Muckraking columnist Drew Pearson, who delighted in torturing McKellar in print, repeated the story in one of his columns.  Copeland managed to enrage the volatile McKellar on the floor of the Senate and although both were well into their sixties at the time, McKellar became so angry that he charged the New Yorker.  Some claimed McKellar actually pulled a knife and proceeded to attack Copeland.  McKellar wore a pen knife on the end of his watch chain, which could not have inflicted any damage and McKellar always stoutly denied pulling a knife on Copeland.  There is little doubt Senator Copeland did cause McKellar to lose his temper and the Tennessean likely did charge the New Yorker, although there is no evidence McKellar tried to stab his fellow senator.

Copeland was deeply committed to homoeopathic medicine and made certain homeopathic medicines were included when he sponsored the Federal Food, Drug and Cosmetic Act in 1938.  It was one of his last successes as a member of the United States Senate.

Senator Copeland had been described as “thin and weak” in some press reports and he died in his apartment in New York at 7:45 p.m. following what some newspapers referred to as a “sudden general circulatory collapse,” which was complicated by a “kidney ailment.”

The irony of Copeland having long lectured senators on the need to avoid overwork and stress was his failure to heed his own advice.  Senator Copeland had apparently pushed himself hard during the recent session of Congress, thereby compromising his own health.  When Senate Majority Leader Joseph T. Robinson of Arkansas had died suddenly during the debate on Roosevelt’s attempt to expand the United States Supreme Court, Copeland had risen on the Senate floor to warn his colleagues of the possible consequences of overwork and stress.

Although James A. Farley, a native New Yorker and Postmaster General of the Roosevelt administration had endorsed Judge Mahoney during Senator Copeland’s campaign for mayor of New York City, FDR himself wired Copeland’s widow to express his condolences and “shock.”

Largely forgotten today, Royal S. Copeland was a compelling figure during his time and a colorful character.

Doctor In the Senate: Royal S. Copeland of New York added by design on February 11, 2018
View all posts by design →