What you don’t know about Chilhowee Park

By design on August 7, 2016Comments Off on What you don’t know about Chilhowee Park 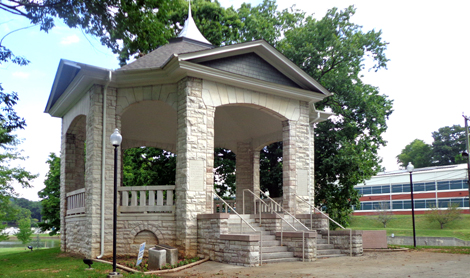 Chilhowee Park is the region’s often underutilized premier outdoor event park. The park and the neighborhoods that surround it are known by most Knox County residents but how much do you really know about it?

What is now Chilhowee Park was, before the Civil War, part of two large farms. The acreage was owned by Alexander McMillan, a Revolutionary War Veteran, and Joseph A. Mabry, a local entrepreneur. Development there for housing began about 1850 and it was incorporated as the city of East Knoxville in 1855. Knoxville annexed the former city in 1868.

During the Civil War the park area was a muster grounds for Confederate soldiers.

In 1875 Professor Fernando Beaman purchased the McMillan farm and converted the land into an attraction known as Beaman’s Park, which became a popular gathering spot. When trolley service was built to serve the area in 1890, Beaman formed the Lake Park Springs company and developed what became known as Chilhowee Park.

The neighborhood of Park City developed as an incorporated town after the citizens voted to withdraw from Knoxville and, in 1910 and 1911, the Appalachian Exposition was held there. The National Conservation Exposition took place there in 1913 and in 1917 Knoxville once again annexed the area.

Today’s Chilhowee Park and Exposition Center is owned by the City of Knoxville and is an 81-acre multi-use venue. It includes the three acre lake, bandstand, a 4,500-seat amphitheater and the large 57,100-square-feet exhibition hall. It also has barns, arenas, a playground and public shelters.

The Chilhowee Park bandstand was built around 1910 for the Appalachian Exposition and is the only building standing from that time that remains today.

The bandstand consists of marble from ten different companies and was erected by William P. Miller, John P. Kern, J.C. Kincaid, G.H. Harvey and W. M. Goodman. It was designed by Knoxville architects R.F. Graff and Sons. Next to the bandstand is a monument to Shirley Nash-Pitts, who led efforts to restore the structure and was president of the Public Assembly Facility Board.

The bandstand was renovated in 1999 under Mayor Victor Ashe and Vice Mayor Jack Sharp.

Another monument there is dedicated to B. A. Morton and J.L. Deaver, original 1910 board members.

In the Beaman Park days, the park was a “mineral springs.” Many nationally known people have spoken at the park including Presidents Theodore Roosevelt and William Howard Taft. Over the years the Jacob Building has seen various events and continues to host things like Esau’s Vendors Market, Friends of the Library Book Sale, ROCCK Racing, various music acts, antique and classic auto shows, Cat Fanciers, the Foothills Craft Guild and much more.

Nationally known musicians have, and continue, to perform there during the annual Tennessee Valley Fair every September. In 1957, jazz musician Louis Armstrong performed and, during his appearance, someone threw a stick of dynamite from a car window in an attempt to disrupt the performance.

For much of its history Chilhowee Park was a “Whites Only” attraction. Local African Americans were admitted only on August 8th, which they celebrate as “Emancipation Day.”

The grounds of the old farms not only house the fairgrounds but also Zoo Knoxville and The Muse Children’s Museum.

What you don’t know about Chilhowee Park added by design on August 7, 2016
View all posts by design →