By design on November 8, 2020Comments Off on E-commerce facility at East Towne approved on first vote 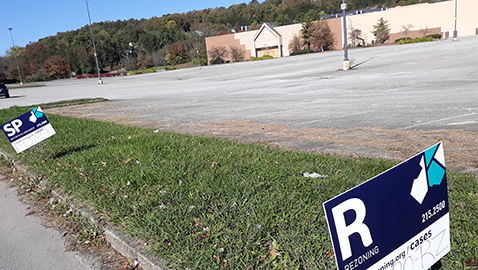 The proposal to turn former East Towne Mall into an e-commerce distribution center received unanimous approval from the Knoxville City Council Tuesday evening. Councilwoman Lauren Rider and Vice Chair Gwen McKenzie moved for approval after hearing from the developer, the Knoxville Chamber and others.

Community activists Kevin Murphy and Ronnie Collins were praised for their efforts to include neighborhoods in discussions about the project.

Doug Lawyer of the Chamber said the Hillwood Enterprises LP development, dubbed “Project Malibu,” will be a $30 to $40 million investment, and employ 370 high-paid employees and 370 contract employees.  The design has been revamped in cooperation with nearby residents to become one and not two buildings, rework parking for tractor trailers, include Knoxville bus service, and rework the main entrance.

Ben Mullins, representing Hillwood, said the community is being consulted and the new single-building design is less intrusive on the apartment complex above the abandoned mall. He said the plans for the 219,000-square foot structure would include a buffer, and will comply with lighting and noise restrictions.

The council approved all three ordinances on first reading, amending the North City Sector Plan, approving Light Industrial for the site and rezoning the property from Regional Commercial to General Industrial.

The fate of a 67-year old hotel on Asheville Highway received a split vote but development plans passed 6-3 with Councilmembers Rider, Amelia Parker and Tommy Smith voting “No.”

Developer Benjamin Mullins said plans call for the demolition of the old motel in order to build “workforce housing” with units aimed at people with about $36,000 annual income.

The project needs one more vote by council to change the zoning there from Office to General Commercial.

The council also approved the issuance of $130,000,000 in general obligation bonds. Part of the money will pay for previously-approved projects and $60 million will simply go to refinancing. Councilwoman Seema Singh asked that the bond sales be divided and presented by category in the future.

The city code was amended to address limitations on the maximum sign size in Office Park Districts. National Building Service was hired to clean outdoor restrooms in city parks and the city government agreed to take part in a county school violence prevention program, kicking in $464,624 with the county picking up 25% of the amount. The program includes installing blast resistant film on school buildings and renewing the at-school visitor management.

Zoning changes were approved for properties at 3110 Greenway and 1718 Whittle Springs Road.

Lynne Randazzo’s appointment to the Historic Zoning Commission was approved and Rick Blackburn was named to the Downtown Design Review Board. Both were nominated by Mayor Indya Kincannon.

E-commerce facility at East Towne approved on first vote added by design on November 8, 2020
View all posts by design →