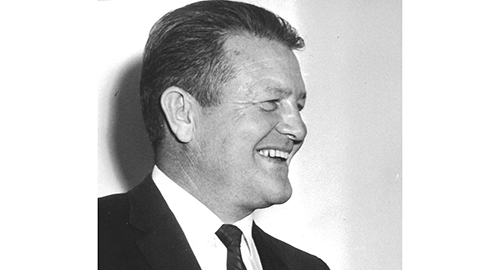 New Mexico entered the union on January 6, 1912 and it became fertile ground for rough and tumble politics that swung from the outrageous to the brutal. Elections routinely were influenced by money and there were frequent charges of voter fraud. One of New Mexico’s first U. S. senators was Albert B. Fall, who later on became Secretary of the Interior under President Warren G. Harding. Fall would eventually go to prison for his role in the Teapot Dome scandal and while he had demonstrated a mastery of the frequently ferocious and corrupt nature of New Mexico’s politics, he did not survive long in the Cabinet.

After Albert Fall, the most political powerful and prominent Republican in New Mexico was Bronson Cutting. A New Yorker, Cutting had moved to New Mexico for his health. Quite wealthy, Cutting used his fortune to purchase a newspaper and influence politics in his adopted state. Cutting was appointed to the U. S. Senate in 1927 to fill a vacancy caused by the death of Senator A. A. Jones.

The Spanish-speaking Cutting used his political power and wealth to cultivate a powerful statewide organization. Senator Cutting was elected in 1928 and reelected in 1934. The 1934 election was very close and Congressman Dennis Chavez, who had lost, contested the election. Senator Cutting was flying back to Washington from New Mexico after having gathered evidence to show he had won the election fairly when his plan crashed in a Missouri field, killing him instantly.

New Mexico’s governor appointed Chavez to fill the vacancy, an appointment that both scandalized and outraged Cutting’s progressive colleagues. When Chavez came onto the Senate floor to take the oath of office, several of Cutting’s friends showed their disdain by leaving the Senate Chamber.

Republicans occasionally won elections in New Mexico, but after the advent of Franklin Roosevelt and the New Deal, they became increasingly scarce. The most popular and successful Republican politician in New Mexico for decades was Edwin L. Mechem.

Mechem was born July 2, 1912 in Alamagordo, New Mexcio. Mechem’s father was a judge and his uncle Merrit Mechem served a term as governor of New Mexico. Mechem attended New Mexico A & M University and worked for a spell before moving to Arkansas to enroll at the University of Arkansas law school.

Mechem only briefly practiced law before becoming an agent for the Federal Bureau of Investigation. Mechem’s career with the FBI did not last long as he became a candidate for the New Mexico House of Representatives in 1946.

1946 was a big year for Republicans and the GOP candidate for the United States Senate in New Mexico that year was Patrick J. Hurley.

Originally from Oklahoma, Hurley was a wealthy lawyer who had served in the Herbert Hoover administration as Secretary of War. Hurley had also done service as a diplomat under FDR as Ambassador to China during World War II. With white hair, a moustache and always exceptionally well-tailored, Hurley certainly looked like a senator and ran incumbent Dennis Chavez a very close race. In fact, there was some reason to believe Chavez actually lost the election and only emerged the victor through voter fraud. The Senate ultimately seated Chavez after Hurley challenged the results.

Ed Mechem won his own election to the state House in that big Republican year, but only served one term. By 1950, “Big Ed” Mechem was thirty-eight years old and campaigning for governor. The Democratic nominee was Congressman John E. Miles, a veteran of New Mexico politics. Miles confidently expected to be elected and nobody was more shocked than Miles when he lost to Ed Mechem in an upset.

Mechem won with almost 54% of the vote and became the first Republican to win the governorship in almost twenty years. New Mexico governors served two-year terms and Mechem had to run for reelection in 1952; he defeated his Democratic opponent by a nearly identical margin as he had won in 1950.

L. Mechem had run on a platform of change, charging the ruling Democrats with corruption in running the state government. Mechem promised to create a state board for control of alcoholic beverages, which, under the Democrats, had been controlled by a single individual. Mechem proposed to reform the state Public Service Commission, which had also been dominated by one person. Governor Mechem insisted that the state police be put under a merit system and pledged to reform the State Highway Commission, which he charged was a nest of political corruption.

Barred from seeking a third two-year term, Governor Mechem entered the race for Clinton P. Anderson’s seat in the United States Senate in 1954. Mechem was almost surely the most popular candidate the Republicans could have fielded, but Anderson was wily and shrewd politician. Anderson had been a Congressman from New Mexico before accepting an appointment to serve as Secretary of Agriculture in President Harry Truman’s Cabinet. Anderson resigned in 1948 to run for the Senate seat being vacated by Carl Hatch (author of the famed Hatch Act), who had been appointed a federal judge.

Despite an energetic campaign, Governor Mechem lost badly, winning only 43% of the vote. New Mexico Democrats were elated, but their happiness was abbreviated when E. L. Mechem announced he would run in 1956 to reclaim the governor’s office.

Big Ed Mechem had defied the odds to win a third term as governor and once again set out to reform state government. He sought reelection in 1958, but it was a terrible year for the GOP. Mechem lost to John Burroughs by just over 1,900 votes out of more than two hundred thousand cast.

Mechem returned to his law practice, but never really stopped running for office, determined to seek the governorship yet again in 1960. The rematch between the former governor and his successor was much like the previous campaign, but E. L. Mechem managed to reverse the results, winning by less than 2,000 votes out of some three hundred thousand cast.

Mechem is the only man to win four terms as governor and his last administration was not especially successful as much of his agenda was frustrated by the Democratic state legislature. Governor Mechem sought an unprecedented fifth term in 1962, but lost to Democratic challenger Jack Campbell, losing by just under 15,000 votes. In all, Mechem was the GOP nominee for governor of New Mexico six times.

New Mexico politics was roiled following the gubernatorial election when Senator Dennis Chavez died on November 18, 1962. Chavez had been in ill health for quite sometime and his death was not unexpected. Mechem resigned as governor and his lieutenant governor, Tom Bolack, appointed the former governor to serve in the United States Senate on November 30, 1962.

Anytime a governor appoints himself to another office, the appointment is naturally controversial. New Mexico Democrats were infuriated with Mechem’s appointment; he had just lost his reelection bid as governor, but there was nothing they could do to prevent Mechem from serving out the last two years of Chavez’s term in the United States Senate.

Mechem entered the United States Senate, the first Republican senator to serve New Mexico since the death of Bronson Cutting in 1935.

Senator Mechem, despite serving a large Hispanic population, voted against the Civil Rights Act of 1964 on the basis of states’ rights. Mechem faced stiff opposition from Congressman Joseph Montoya when he sought to keep his Senate seat in the 1964 election.

The candidacy of Barry Goldwater for president, despite being from Arizona, did nothing to help Mechem’s candidacy. Senator Mechem lost to Little Joe Montoya, winning only 45% of the vote.

Edwin L. Mechem’s political career was over, but his public life would go on for many years. Mechem again resumed the practice of law until 1970 when President Richard Nixon nominated him to serve as a federal judge. Nixon referred to Mechem as the “Mr. Republican” of New Mexico when nominating him.

Mechem was confirmed by the United States Senate and he served as Judge of the U. S. District Court for New Mexico for the rest of his life.

L. Mechem became a respected judge and his decisions did not reflect a conservative bias. Mechem ruled there was age discrimination at the Sandia National Laboratories, as well as sex discrimination practiced at the Albuquerque police department. Judge Mechem also issued a decision citing that handicapped children were not receiving a proper free public education. Mechem ruled that the Socorro County jail had been apathetic to the medical needs of a prison who had died in police custody.

Mechem assumed senior status as a judge in 1982 when he turned seventy, yet he continued to work throughout the rest of his life. Mechem suffered from a heart condition that worsened as he aged and he died on November 27, 2002 at his home in Albuquerque at age ninety.