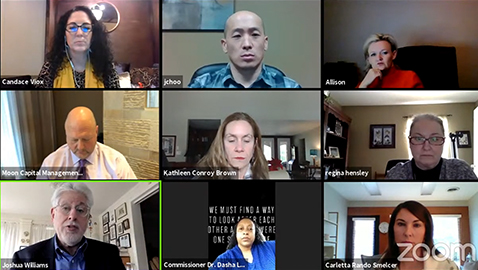 A new committee had its inaugural meeting last week.

The Knox County Committee on Health and Economic Well-Being met for the first time virtually, via Zoom, on Wednesday afternoon.

The 11-member committee, which was formed to serve in an advisory role to Knox County Mayor Glenn Jacobs and the Knox County Commission, appointed officers and discussed what its place and identity would be moving forward.

After selecting its officers, the committee discussed what its role would be and its true identity.

“The perception is out there that this committee was formed to undermine the (Knox County) Board of Health and that was not my intention when I agreed to serve on this committee,” Williams said. “That may be the objective of others on this committee, and those members are certainly encouraged to speak up.

“I’m here to work with the Board of Health to support health and economic development.”

With Wednesday’s gathering being the first meeting, all of the committee members were calling for the clarification of the committee’s function moving forward as it considers the impact of COVID-19 and subsequent issues surrounding the pandemic, which has impacted Knox County for nearly a calendar year.

“This is an advisory committee,” Buuck said. “The mayor and the County Commission are looking for recommendations.”

The committee set its meeting dates. It will meet on the second Wednesday of each month. The next meeting will be held virtually on March 10 at 3 p.m.

Williams and other committee members have agreed to set tentative time limits for meetings.

The first formal meeting in March is slated to last two hours and committee members have agreed to keep meetings at one hour beginning in April.

“I hear people saying that they want a two-hour meeting but I’m a proponent of a one-hour meeting,” Moon said. “I feel like we can get done what we need to get done in 60 minutes.”

Economic and Well-Being Committee meets for first time added by design on February 21, 2021
View all posts by design →