An extra birthday for Hardy Johnson this year

By design on July 15, 2018Comments Off on An extra birthday for Hardy Johnson this year 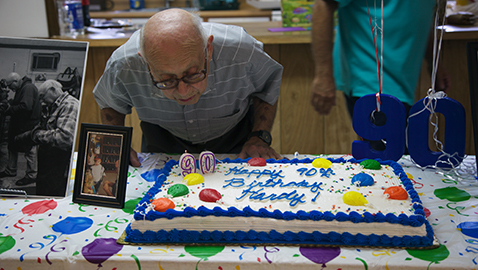 Thanks to his son, Hardy Johnson had a special birthday celebration this year, and since it was his 90th, it was very fitting.

Jim Johnson is a deacon at Dante Missionary Baptist and the church, which is located between the Halls and Powell communities, provided its banquet/fellowship room for the occasion on Sunday afternoon, July 8.

The extra space allowed for tables displaying old family pictures, Hardy’s memorabilia from serving with the U.S. Army in the Korean War and also items from his longtime shoe business.

The special day also allowed for more folks to enjoy time with Hardy, who would, of course, be working at his shop in Fountain City on his real birthday (July 12) Thursday.

That’s what separates Hardy Johnson from just about all other 90 year olds. He still works six days a week and usually 10 hours a day. Birthdays included.

And, yes, there were some who came by to tell Johnson “Happy Birthday!” on Thursday, too.

Hardy blew out the candles and cut the birthday cake to officially get the festivities going. Then he and Jim stood at the entrance and greeted each person as they continued to arrive.

“It’s been great,” said Hardy later, describing the large turnout for the event, which lasted over two hours. “I didn’t realize that many people were going to be here. I don’t know half of them. But they know my family and Jim, who goes to church here.”

Hardy’s sister, Ila Grissom, 94, attended the event in addition to other family relatives and friends.

As he relaxed and talked with others, Johnson reflected on being in the Korean War.

“It was one of the best times in my life,” he said. “It was different. You were around good people.”

“The three of us were always together,” he said. “I just wonder if they’re still living.”

Johnson also recalled his time in the war coming to an end.

“We had one little radio there and you just had that one station – the Armed Forces Network – and they were broadcasting the signing of the truce.

“Oh, man, they were really glad to hear it,” he added. “It was just a few days later that I started home.”

Hardy, who said he began working when he was “11 or 12 years old,” says his knees have gotten “much worse” since last year, but he manages to still get around and work.

“I’m too old to have a new knee put in. The doctor won’t touch me, so I’ll just have to suffer it out the rest of my days. It’ll be alright. If there ain’t anything no worse than that, I’ll be alright,” he says, laughing.

Logan Wells, one of the younger folks at the party, asked, “What’s the secret to living to 90?”

“Stay with it,” answered Hardy.

In addition to his military service, the Optimist Club of Knoxville honored Johnson as Grand Marshal of the Fountain City Optimist Christmas Parade in 2011 and he was named Fountain City Town Hall Man of the Year in 2015.

An extra birthday for Hardy Johnson this year added by design on July 15, 2018
View all posts by design →