Larry Cox has been commissioner for the Knoxville Falcons' youth football program for over 30 years. 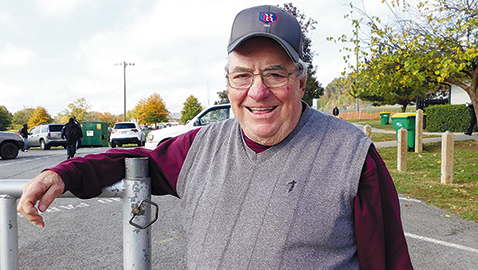 The beat goes on for the Knoxville Falcons’ youth football program.

The Falcons have been big winners in the Knox Metro Youth Football League in recent years and had another banner season this fall, capturing championships in six of the eight age groups.

The program, which is based in the Christenberry area of North Knoxville, not far from Fulton High School, took top honors in the 6-year-old and under flag league and the 7U, 8U, 10U, 12U and 14U divisions which all play “tackle” football.

First Baptist Academy’s 9U team and Central’s 11U team finished on top in their divisions to prevent a sweep.

“We’ve got a lot of dedicated and knowledgeable coaches of the sport,” said Larry Cox, who has been the Falcons’ commissioner for 30-plus years.

Cox said his coaches like to play the toughest competition they can find, even if it means losing sometimes. They go out of state to play in tournaments and also compete against out-of-state teams in the annual Kickoff Class and Battle of Rocky Top, which are held in Knoxville.

“Playing better competition, helps us meet local competition much better,” added Cox. “And I think we get a lot of good skill athletes.”

Cox praised the coaching demeanor of two of his head coaches, Ricky Jones and Tony Kyle, who worked with the 8U and 14U squads respectively this season.

“Those two coaches have been around a long time and they have real good discipline on their ball players,” said Cox. “They keep the parents at bay where they’re coaching the team.

“I’ve always said they are the type of coaches who can discipline a kid and pat him on the back at the same time and make the kid feel good about their self. That’s the heart of a kids’ coach.”

A lot of the Falcon players eventually feed into the Fulton High program and Cox estimated that 15 of the FHS team’s 24 seniors this season came up through the Falcons’ youth program.

Cox said there were 165 to 170 players on the Falcons’ youth tackle teams this year and another 30 in flag football. He said this season’s total “was down maybe 25 kids” overall from last year.

FBA went 9-0 during the season. Six of the Eagles’ nine wins got to the “mercy rule” said Head Coach Danny Stewart. “They outscored their opponents 183-6. The defense only gave up one touchdown in 9 games.

“We are very proud of how far these boys have progressed over the years. They’ve been runner-up the past two seasons and were determined to break through this year and bring home the championship. They have put FBA football on the map and are going to be tough to beat in the years to come.”