FBA’s busy Lady Eagles get a boost from transfer

By design on January 10, 2021Comments Off on FBA’s busy Lady Eagles get a boost from transfer 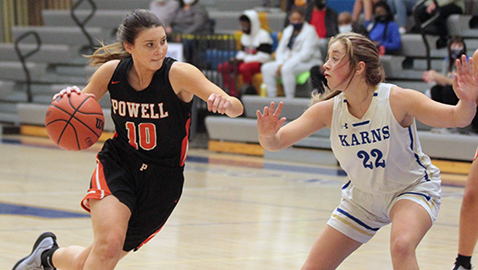 The First Baptist Academy girls had to be the busiest basketball team on the local scene during the holidays.

They played on the day before Christmas Eve and were back on the court the afternoon after New Year’s Day.

The Division II Class A school in Powell defeated Kingston 61-57 in its first game in the new year and added a 69-51 victory over Sweetwater on Jan. 4.

“We have been very blessed to have played as many games as we have thus far,” said Coach Freeman Pinkney, who is in his first season at First Baptist Academy. “I credit a ton of our success to the way our girls prepare each day. As of today (Jan. 7), we have surpassed the most wins in school history.”

Freeman said the key players that have made a huge impact in the team’s 11-8 record have been Aaniyah Johnson, Canaan Chitwood and Catherine Hendershott, who transferred to the team in December.

“Catherine has been phenomenal for our team, providing a needed boost,” added Freeman.

UNDEFEATED: Farragut picked up where it left off after the holidays.

Sidelined since Dec. 12 by Knox County Schools’ decision to shut down athletics during the winter break, the Lady Admirals notched an 81-48 district win at William Blount last Tuesday to raise their record to 8-0.

In its first seven games, Farragut had averaged scoring 74 points per game, while allowing only 33 points.

ROAD WARRIORS: Powell also remains unbeaten but had played only three games, including two Hall of Fame contests in November, when the calendar flipped over to January. COVID-19 reasons had kept the Lady Panthers off the court even before the KCS shutdown.

John Fisher’s team returned to action with an 81-64 win at Hardin Valley after being idle for around a month and upped its record to 5-0 with a 75-37 win at Karns Thursday.

Powell was scheduled to play at Central Friday and has a district game this Tuesday at Oak Ridge.

All of the Lady Panthers’ wins have been on the road.

PERFECT SO FAR: Fulton is having a perfect season and resumed play with a 59-46 win over Anderson County and a 51-48 victory at West Thursday to extend its record to 7-0.

WINNING RECORDS: Berean Christian went 3-0 over the holidays to up its record to 7-1. However, an 84-42 district loss to Lakeway Christian Academy quickly grounded the Lady Eagles.

CAK played seven games during the holidays and rolled to a 56-18 win at Grace Christian last Tuesday to improve to 8-6.

Halls (5-3) resumed play with a 73-57 win over Clinton and was slated to host Karns Friday.

A LITTLE RUSTY? Bearden lost it first game back on the hardwood last Tuesday, falling at Alcoa 47-45. Ironically, the Lady Bulldogs had played Alcoa in their last game before the shutdown, toppling the Lady Tornadoes 54-42 to boost their record to 8-0.

Bearden is scheduled to host Heritage in a district game Tuesday.

TOUGH SCHEDULE: The King’s Academy, which started the season 0-6 against a solid row of state-ranked teams, got its first win over Science Hill 38-29 in the Winterfest Shootout at Sevier County. The Lady Lions added a 63-47 win at FBA last Tuesday.

FBA’s busy Lady Eagles get a boost from transfer added by design on January 10, 2021
View all posts by design →