The Fight To Succeed J. Will Taylor

By design on September 9, 2018Comments Off on The Fight To Succeed J. Will Taylor 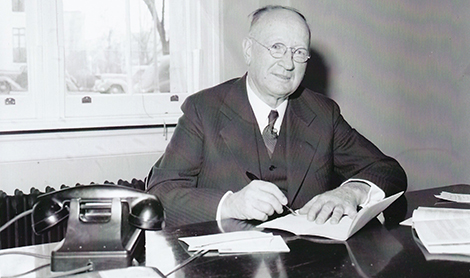 By Ray Hill
After Congressman J. Will Taylor died suddenly on November 14, 1939, there was not unexpectedly, a fight inside the Republican Party to succeed him.  The nominee was to be named in a convention by the counties comprising Tennessee’s Second Congressional district and would go on to compete in a special election.  There had been a brief movement to allow Taylor’s daughter Elizabeth to run and fill the remainder of his term, but she had withdrawn her name from consideration, citing the ill health of her mother.

Judge John Jennings, like J. Will Taylor, a native of Campbell County, named a campaign manager to lead his followers at the convention.  J. R. Weaver had been in the insurance business for quite some time and was closely associated with the late Congressman Taylor.  Jennings began the campaign for the nomination a step ahead, as Blount County’s 41 delegates were pledged to support him at the convention.  Judge Jennings was the first candidate to acquire a substantial number of delegates, although Anderson County’s 18 delegates were backing favorite son Mayor T. L. Seeber of Clinton.  Campbell County’s 28 delegates were uninstructed, meaning they were free to vote for whomever they wished and a poll of the delegation revealed there were votes for several candidates, including attorney Ray Jenkins, Jack Dance, and John Jennings.  Both Dance and Jenkins were announced candidates for the GOP nomination and W. E. Michael of Madisonville made his own declaration of candidacy.  The thirty-five year old Michael was a graduate of Carson-Newman College and a newcomer to politics who readily admitted his own campaign was self-driven.  “Although I have not been besieged by any ‘host of people’ to make this race, I have since announcing received numerous and gratifying expressions of support.”

Judge Jennings certainly seemed to be the most organized candidate and perhaps the best funded, as he actually opened a campaign headquarters in the Hamilton National Bank Building.  The local Knox County convention to select delegates was something of a wild affair.  The largest county inside the Second Congressional district with 121 delegates to the Republican nominating convention had at least two favorite sons, Jack Dance and Ray Jenkins.  John Jennings, although a native of Campbell County, had lived in Knox County for years and had many supporters in Knox County.  Jenkins proved to be the favorite in Knox County, emerging with 63 delegates pledged to support his candidacy, while Jack Dance and Judge Jennings divided the remaining 58 delegates.  Evidently the two-hour meeting was a rollercoaster of emotions, ranging from “white-hot anger” to “affectionate tears.”  With more than four hundred precinct committeemen and women comprising the Knox County Republican convention, Jenkins’ supporters made a bid to instruct the delegates selected to attend the nominating convention.  The motion to instruct the delegates narrowly passed, 215 – 194.  Ray Jenkins pulled Judge Jennings and Jack Dance into “a huddle” and subsequently bellowed, “I never got anything in this life that I didn’t work for.  I realize that for the Republican nominee to be elected, he must receive the whole-hearted support of the party.”

Jenkins then proposed, citing the agreement of Judge Jennings and Jack Dance, the delegates be apportioned along the lines of the votes cast.  Jenkins’ gesture was seen as fair and was much admired by most of the folks attending the convention.  Harley Fowler, a local attorney and Chairman of the Knox County Republican Party, cautioned the delegates, reminding them whoever became the Republican nominee, the GOP must be united.  “We are surrounded by powerful state and federal Democratic machines,” Fowler cried, “and if we slip here and split the ranks of the Republican party, the Democrats will take away this single Federal office we have held since the Civil War, and we’ll never win it back.”

While Ray Jenkins remained a slight favorite in Knox County, John Jennings seemed to be picking up support in the outlying counties of the district.  The Knoxville News-Sentinel reported Judge Jennings had the backing of influential Republicans in Morgan County.  The nominating convention was to be held on December 12, 1939 and a poll indicated Jennings had a slight lead in the delegate count.  Campaign manager J. Rector Weaver seemed perhaps a little too confident, saying, “We’ve got it in the bag.”   Weaver’s confidence not withstanding, Scott County pledged its votes to favorite son, Attorney General Howard Baker, while Union County backed its own native son, Judge W. P. Monroe.  After a brief battle in Huntsville, the Scott County delegation reversed itself and pledged to support John Jennings.  A meeting in Maynardville of Union County Republicans likewise produced a heavy trend in Judge Jennings’ favor.  A tally of counties showed Jennings leading in Anderson, Blount, Campbell, McMinn, Morgan, Roane, Scott and Union counties.  Ray Jenkins was leading the delegate count in Knox, Loudon, and Monroe counties.  Jack Dance trailed far behind the delegate count of his opponents.

Hammond Fowler, who had won a special election to the Tennessee State Senate, was the prospective Democratic nominee to succeed the late J. Will Taylor.  Eyeing the rapidly approaching Republican nominating convention, Fowler issued a blast against both John Jennings and Ray Jenkins.  Fowler scored both Jenkins and Jennings as not genuinely being for the Tennessee Valley Authority.  “My zeal for the TVA is not a political deathbed conversion or a sudden wave of virtue in anticipation of the imminent approach of Santa Claus,” Hammond Fowler thundered.

December 12, 1939 saw Republican delegates from across the Second Congressional district gather.  The Knoxville News-Sentinel reported it was not long before “bedlam” had broken out on the convention floor, including “several near-fist-fights” as the delegates attempted to elect a permanent chairman for the meeting.  The eventual winner was John Kelly, who was supporting Judge Jennings, on a vote of 208 – 178.  It was an important victory for the Jennings forces.  Kelly endured several challenges to his chairmanship, but overcame them all.  After Kelly kept his shaky hold on the chairman’s podium, the names of candidates were placed in nomination.  John Jennings was nominated by Frank Bowen, while Jack Doughty nominated Ray Jenkins.  Jack Dance, Judge W. P. Monroe, Mayor T. L. Seeber, and J. Ralph Tedder were also nominated.

As the roll was called, Andy Hartman got up and announced all 121 of Knox County’s votes were cast for Ray Jenkins, an announcement that brought the Jennings delegates to their feet roaring with outrage.  Hartman’s move caused an hour-long reign of “pandemonium” throughout the convention hall.  The vote cast by Knox County immediately drew a challenge and the chairman was attempting to restore order by banging “the table with a heavy water glass”, although virtually nobody paid him any attention.

Judge Jennings released a statement, indignant at the attempt to grab his delegates from Knox County and loudly complained it was an attempt to change the rules in the middle of the game.  Jennings raised the prospect of secret meetings and skullduggery.  “It is now apparent that certain members of the Congressional Committee met in a hotel room in Knoxville last night and laid plans to have the Congressional Committee attempt to change the ‘rules of the game’, and alter the plan after the fight has been won by my friends,” Jennings said.  Judge Jennings could barely bring himself to believe a handful of men meeting at midnight “would undertake to overthrow and disregard the action of the Republicans of the district” by attempting to steal the nomination for another candidate.  Jennings warned that the people would not be cheated.  “No last minute short cut by a Committee can defeat the will of the people,” Jennings snapped.  “It can only result in the defeat of those who attempt it and harm the party.”

The two main candidates, John Jennings and Ray Jenkins, tested their respective strength on a test ballot.  Showing considerable strength in Blount, Anderson, McMinn, Morgan, Roane and Scott counties, the Jennings supporters prevailed.  As William York of Scott County attempted to speak, another delegate tried to shut down his talk and York gave the fellow “a hefty shove” and barked, “You get off the stage – – – you’re drunk!”

The contest was hard fought and after a few more fights and much shouting, Judge John Jennings, Jr. was nominated to run in the special election to fill the vacancy caused by J. Will Taylor’s death.  Jennings was well known for thinking fast on his feet, being energetic and had a knack for telling good stories.  The fifty-nine year old attorney was balding and what remained of his hair was reddish in color.  Jennings was an able orator and reputedly “loved to talk” irrespective of the occasion.  After he decided to run against J. Will Taylor in the 1922 Republican primary, Jennings fought a bitter campaign to wrest the nomination from the incumbent, but lost decisively.  Without missing a beat, Jennings campaigned with equal energy that fall for Taylor.  It made a lasting impression on Taylor’s supporters.  Jennings and his wife Pearnie were the parents of three daughters.  Jennings had met his future wife while teaching school and eventually became the superintendent of schools for Campbell County.  Deciding practicing law might be far more lucrative than teaching, John Jennings, Jr. had been a lawyer in Knoxville for sixteen years before winning the GOP nomination for Congress.  The Judge had apparently done well with his law practice as he maintained a comfortable home on Kingston Pike.

One of Judge Jennings’ favorite stories involved a farmer with a large family who was in court.  Jennings heard the farmer call for his daughter “Larseena.”  Jennings, presiding in court, listened as the farmer’s attorney repeated the name.  “Larseena?  That’s an unusual name – – – how did you come to name her that?”

“Well, it’s like this,” the farmer explained.  “I attended court one time while they was trying a man for stealing a hog.  They kept saying something about larseena and I thought it was a right pretty name for our youngest.”

Clarence Templeton, a judge and attorney from Jellico, Tennessee, liked to tell a story involving John Jennings and his drawing Jennings’ ire.  Judge Jennings fined Templeton $10 for contempt of court.  “But I haven’t any money!” Templeton wailed.  “Borrow it from your friends,” Judge Jennings serenely replied.  “Well,” Templeton drawled, “Your Honor is the best friend I’ve got.  Will Your Honor lend me that $10?”  After a moment, Judge Jennings turned to his clerk and growled, “Enter that fine and show by the record that it is suspended.  The State of Tennessee can better afford to lose $10 than I can.”

John Jennings’ vast store of humorous tales came in handy as he toured the Second District promoting his candidacy.  Hammond Fowler was one of the most able speakers on behalf of the Democratic party in Tennessee and he received financial aid from national Democrats.  Senator McKellar was much interested in Fowler’s candidacy and attempted to raise money for him.  Throughout the campaign to win the special election to succeed J. Will Taylor, both Fowler and Jennings vied to demonstrate their support for and love of TVA.  Both candidates claimed they would protect the agency from congressional enemies.  Hammond Fowler scoffed at the notion Jennings would protect TVA, noting sending Jennings to Congress to advocate for the agency would be “like setting a fox to guard the hen-roost.”

The genial Jennings gave as good as he got and his fund of stories amused his audiences throughout the Second Congressional district.  In the end, the voters stuck to the Republican party and elected John Jennings, Jr. to Congress.

The Fight To Succeed J. Will Taylor added by design on September 9, 2018
View all posts by design →